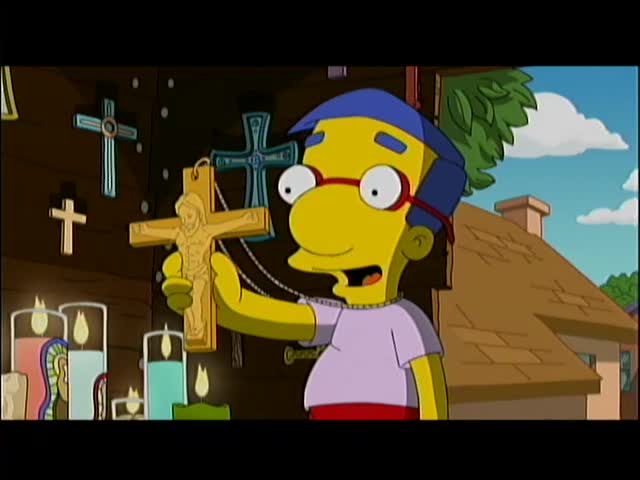 On Sunday, May 20, 2018, an episode of Fox’s The Simpsons, “Flanders’ Ladder,” mocks Jesus Christ by making the crucifix a fetish and calling Christianity a “dopey religion”.

In the episode, Bart Simpson is struck by lightning and, while comatose, he begins having vivid nightmares that he has died and is being haunted by ghosts. Upon awaking, although he isn’t Christian, Bart places crucifixes all over his tree house to “ward” off the ghosts — a jab against Christianity, implying that Christians are superstitious.

Then the episode went into a direct attack.

A friend of Bart’s, Millhouse, pops into Bart’s tree house and asks what’s going on. Millhouse expresses astonishment that Bart is “going to God now”.

Bart retorts that he doesn’t “believe in some dopey religion,” but that the crucifixes are “to keep out ghosts.”

The American Society for the Defense of Tradition, Family and Property has a petition to tell Fox Broadcasting that mocking Jesus in The Simpsons is unacceptable.

Too many Christians are wimps. Just remember what our Lord said:

“Whoever acknowledges me before others, I will also acknowledge before my Father in heaven.” -Matthew 10:32