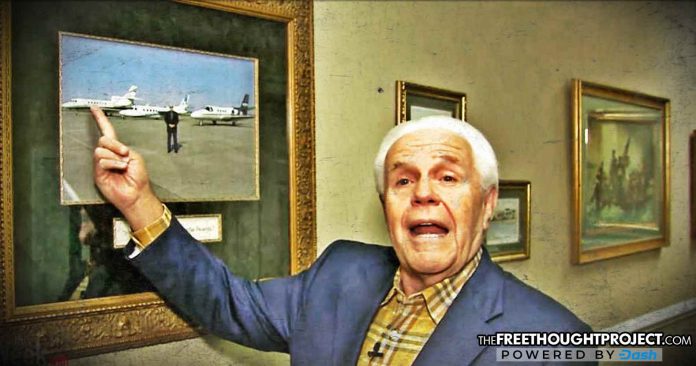 A televangelist out of Louisiana is making headlines this week after he told his followers that God said they should buy him a Dassault Falcon 7X private jet, which costs about $54 million. While this may seem like a ridiculous and outright grotesque abuse of his authority and influence in the community, US televangelist Jesse Duplantis is dead serious and is not backing down.

Earlier this week, Duplantis implored his congregation to help him fund the $54 million jet. Comparing himself to the son of God, Duplantis told his flock that if Jesus was alive today, he “wouldn’t be riding a donkey.”

According to Duplantis, he was contemplating the purchase himself before he remembered that in 1978, God told him to ask his followers. According to the televangelist, God said, “I didn’t ask you to pay for it. I asked you to believe for it.” Duplantis took this ‘divine’ message to mean dupe your followers into buying you a jet.

If you think for a second that this insanity would never fly, think again. The purchase of the Falcon 7x would be the the fourth private jet funded by Duplantis’ followers. Yes, the man who is asking for his followers to buy him a $54 million dollar jet—already owns three of them and he has no problem showing it off.

To illustrate this blatant hypocrisy, TFTP reached out to a pastor of a large church in North Carolina. This is what Mike Whitson Sr. at First Baptist Church in Indian Trail, NC had to say about Duplantis’ claims that he needs these jets to spread the word of the lord:

“This reminds me of a very familiar story in Luke 12 when the rich man said ‘I’m just going to expand my warehouses’ and Jesus condemned him declaring that night he would lose his life.

He could take that $54 million and buy a lot of airplanes and donate them to Wycliffe Bible Translators and take the Gospel to places where it’s never been heard! You could buy 50 planes with that!”

So, how is it that this blatant exploitation of his followers can take place, not once, not twice, but four times, and go unchallenged? If we were to sum up the answer to that question in one word, it would be authority.

Duplantis is seen by his followers as a figure of authority. Speaking in biblical and religious terms, it is impossible to conceptualize preaching without authority. The many biblical commands associated with preaching—admonish, instruct, warn, exhort, rebuke, reprove, correct, confront—presume and necessitate an authoritative sermon. As Matthew 7:29 states in the bible, Jesus amazed those who listened to him because he spoke “teaching as one with authority, and not as their scribes.”

Most preachers responsibly use this authority to help their followers seek religious enlightenment and find peace through worship. However, the gold ring-wearing, three private jet-owning, five thousand dollar suit-sporting televangelists—like Jesse Duplantis—use this authority to extract personal gain from those who submit to it.

Don’t take my word for it though, just look at the fact that “preaching the word of the lord” has earned Duplantis a net worth of at least $40 million.

Sadly, televangelists across the country do the same. Kenneth Copeland, who coincidentally just acquired the same $54 million Dassault Falcon 7X is worth over $760 million. Pat Robertson is worth over $100 million. And, Benny Hinn is worth more than $42 million.

This exploitation of authority is not limited to religious leaders either. Government employees—despite being paid by the people they ostensibly represent—constantly abuse their authority to exploit their followers.

Case in point: There are horrific and countless cases of police officers using their authority to take advantage of children recruits in the explorer programs across the country. In case after case, innocent children, who admire and look up to the authority of police, are sexually abused by those they trust the most.

Politicians are complicit in the abuse of authority as well. As their constituents vote them into office to represent their interests, once in power, nearly all of them begin flip-flopping on their promises they made to get elected. Every single president in recent history has a laundry list of broken campaign promises and outright hypocritical reversals on stances people trusted when they voted for them.

A quote from the Christian Science Journal, printed in 1902, aptly described this potential for abuse, noting that “Government is not reason, it is not eloquence,—it is force! Like fire, it is a dangerous servant, and a fearful master; never for a moment should it be left to irresponsible action.”

Indeed, the word government could be replaced with authority in the above quote to include all forms, not just the state.

Authority can be used in two ways, one that is useful, and one that is detrimental to free will and liberty. Those who are authoritative lead through example and are trusted because they have proven themselves. The authoritarian leaders, however, gain compliance through coercion and power.

Unfortunately, it seems that many people have forgotten how to tell the difference between the two. Until humanity begins to critically question those in positions of authority over them, the ones willing to exploit that trust will reign supreme.

In the video below, we can see just how lost some people are when it comes to obeying, no matter the consequence.

Showing how people unquestioningly follow authority, a man in a non-specific uniform gets strangers to litter, change how they walk, makes them jump in place, and even gets them to enact violence against others.

The idea of asking for a $54 million jet doesn’t seem that far-fetched anymore now, does it?