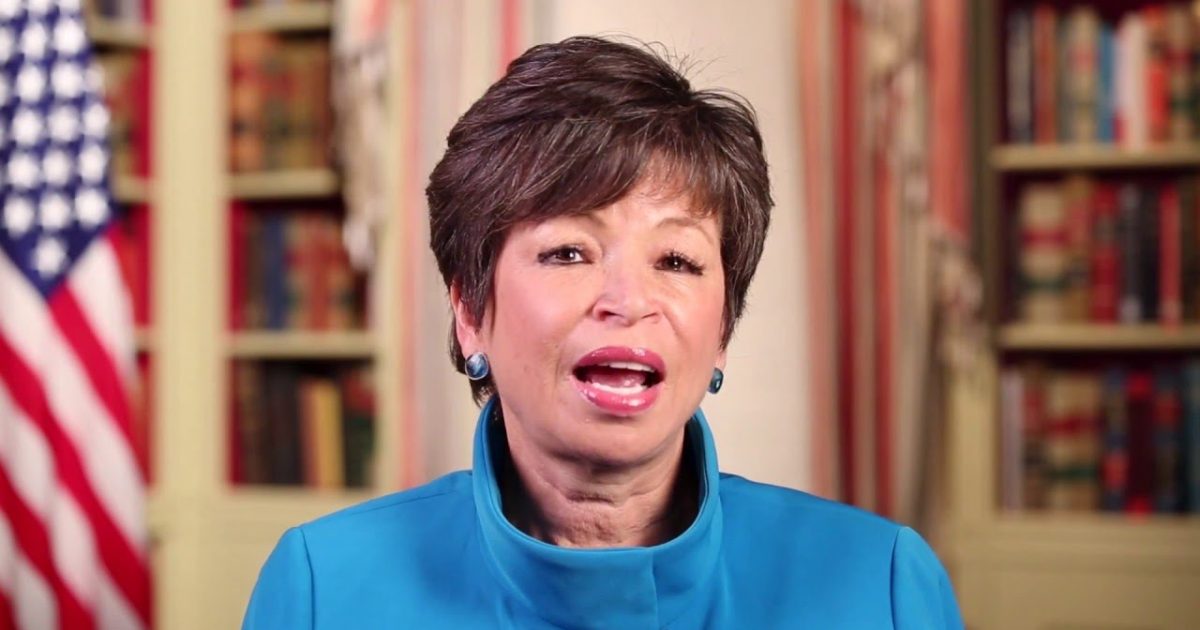 Roseanne Barr’s been fired, her show cut and her fan-base excoriated for a despicable tweet she made about former Barack Obama insider, Valerie Jarrett. But what about Jarrett’s own scandals?

What about the fact this former White House whisperer helped cover up the corruption that dotted the Clinton Foundation — corruption and funding scandals that are still, to this day, coming to light?

Jarrett was certainly an enabler.

And it’s just curious: There’s so much outrage over an onnuous tweet. But there’s dead silence over abject corruption and pay-for-play scheming.

Roseanne Barr’s racially charged Twitter attack on Valerie Jarrett should not immunize former President Barack Obama’s closest confidante from having to explain why she helped cover up and therefore enabled the biggest charity fraud ever, the Clinton Foundation.

The process begins with asking why did Jarrett and Obama push former Secretary of State Hillary Clinton for the 2016 Democratic presidential nomination? By July 10, 2015, Hillary Clinton would have been an unelectable candidate had the full truth then been known.

On that day, we have since learned, the FBI opened a full-scale investigation into whether Clinton and her innermost circle of trusted aides mishandled classified information while and after she served as the chief U.S. diplomat. Thousands of pages of FBI and other files concerning this investigation are found here (see especially Part 1 of 21).

A bungler who transacted 100 percent of State Department business over unsecure private servers, using unreliable electronic devices, and who was under robust investigation by the FBI hardly seems the strongest candidate to take on any nominee selected by the Republican Party, let alone an unconventional, wealthy disruptor named Donald J. Trump.

So why did top officials in the FBI and the Department of Justice (DOJ) and others in the Obama Administration — likely including the 44th president himself — cover up the true extent of defects in Clinton’s record while and after she was secretary of state?

The answer seems obvious and simple. Clinton, if elected, was certain to destroy or bury all evidence in long-running and wide-ranging activities involving public corruption and frauds arranged through main and satellite “charities” connected to the Clinton family, whose origin dates to Oct. 23, 1997, when Bill Clinton was 42nd president of the United States.

Evidence that Clinton might have helped destroy had she won included incriminating emails and other documents proving the extent to which Jarrett and others were aware of Clinton Foundation crimes, chose to ignore these serious infractions, and worked hard to cover them up for more than eight years.

So Jarrett, Obama, and other senior Democrats likely held their noses and worked as hard as possible to anoint Hillary Clinton as 45th president of the United States.

This decision was easy and inescapable. It remains partially inexplicable because complicity in covering up Clinton crimes began months before Obama was inaugurated, by mid-November 2008.

Hiding the crooked books of Clinton “charities.” After Obama won the presidency in 2008, hard work abetting Clinton family charity frauds began in earnest because a global audience of donors and regulators had to be tricked into believing the foundation and numerous affiliated entities were actually charities in good standing, when in truth they were neither organized nor operated lawfully at any moment during 2008, or afterwards.

You will not see the complete and incriminating 2007 return on the foundation’s website here. To see the filing that arrived at the IRS office, you need to visit the advanced search portion of ProPublica’s Nonprofit Explorer website and enter the federal Employer Identification Number (EIN) 31-1580204 in the indicated field, then click through to the 2007 return, which you can download.

But to understand more glaring defects in the foundation’s record, you need to visit state registries in New York and Massachusetts, among many others.

At the New York Charities Bureau Search webpage, punching in the foundation’s EIN lets you find numerous historical annual reports, including the one for 2007. This pivotal report, filed in January 2009 (well past the final filing deadline), includes pages omitted from a purported “audit,” by the accounting firm BKD LLP, that demonstrate an entity called the Clinton Health Access Initiative (the “new” CHAI), which was the foundation’s single largest component in 2007.

To see why this omitted disclosure is so important, visit the Massachusetts Corporation Search webpage, and look carefully at filings for the foundation and particularly for an entity called the “Clinton Foundation HIV/AIDS Initiative Inc.” (the “old” CHAI). The state of Massachusetts, on March 31, 2008, involuntarily revoked authority for old CHAI to operate there from Dec. 31, 2007, forward.

This means that all during 2008, the largest piece of the foundation evidently operated in bold violation of Massachusetts laws from its headquarters office in Boston. It also means that this serious set of infractions was concealed from regulators in most U.S. states (including New York) and from key foreign regulators.

A public charity like the foundation cannot engage in illegal activities of any kind. Here is dated yet relevant information from the IRS that explains the obvious. An IRS department headed in 2008 by Lois Lerner should have shut down the foundation by November 2008. We can all suspect why that did not happen.

Bad as the Clinton Foundation predicament was by November 2008, Team Obama nonetheless decided Hillary Clinton had to hold a choice appointment in the historic president’s Cabinet.

Swindling colleagues in the U.S. Senate. If senators were to confirm Clinton as secretary of state, a majority had to be satisfied that conflicts and potential conflicts between the international work of the Clinton Foundation and her role as chief diplomat would be avoided or managed, thus protecting the interests of American taxpayers.

Thus was born the memorandum of understanding (MOU) that described a series of measures Clinton agreed to take to reassure senators and the public that there would be no conflicts between her official duties and the interests of the foundation. You can read the real MOU here.

Lawyers will confirm that an MOU is not legally enforceable, and they will note that the Clinton MOU doesn’t even name as one of its parties the former president, the person most likely to have actual conflicts of interest. The MOU is Swiss cheese because it has so many holes you can almost see through it.

Moreover, no portion of the description of any part of the foundation is accurate, as is made clear by the above referenced links. Why, then, did Jarrett affix her signature to the MOU and thereby assent to its terms on Nov. 16, 2008?

Team Clinton, partners in the Obama administration, and allies in the liberal mainstream media have tried at all costs to distract the public from seeing the key elements in the push to install Hillary as the second Clinton in the Oval Office. In return, she was to insulate the Obama team from accountability for criminal acts committed between 2009 and 2017.

Soon, we will learn if DOJ Inspector General Michael Horowitz (an Obama appointee) has understood the real motives of the previous administration during the chaotic 2015-16 election cycle and its aftermath.

Will Horowitz whitewash evident corruption, fraud, and obstruction of justice, or will he rise to the occasion and uphold U.S. laws? The Constitution and, with it, our republic hang in the balance, awaiting his findings.