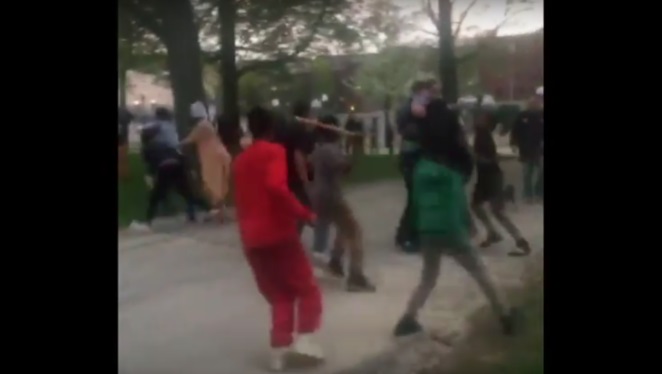 Surprisingly, the scene was reminiscent of something you’d see in Somalia.

It was an otherwise pleasant evening in Maine when two dozen Somali youth swarmed and attacked two local residents in Kennedy Park last Thursday evening [on May 17].

The Somali mob attacked around 7:45 pm, just as the sun was setting on this historic city park in the heart of Maine’s second largest city.

A local mother recorded as a mob of teens and children, boys and girls as young as nine years old, brandishing wooden bats and other objects, along with fists, feet and sheer numbers to attack the two non-Somali defenders. At one point you can even here one of the hoodlums repeatedly daring the woman to, “stop me, b**ch.”

Lewiston Police tell Maine First Media one of the victims was taken to the hospital with minor injuries. However, no charges were filed.

[…]Witnesses at the park say the attack started when one of the victims asked one of the attackers to use a lighter for his cigarette. However, Lewiston Police are reviewing the video and have not determined an official motivation for this gang assault.

This is far from the first incident of Somalian attacks at Kennedy Park. Recently, a 10-year-old girl was jumped and beaten by a Somali girl at the park. As such occurrences become more common in Lewiston, many lifelong residents are now afraid to bring their own children to play.

Maine First Media shared another video earlier this year from a Lewiston City Council meeting showing Somali migrants lobbying in favor of a bill to create a new “Office of New Mainers” and a new “multi-million-dollar Foreign Welcome Center.”

The migrants can be heard repeatedly saying they’re who make Lewiston and Maine “great.”