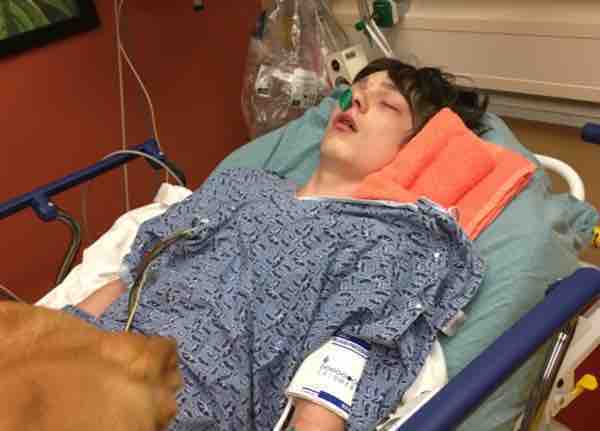 A 15-year-old Georgia boy was kidnapped by the state from his parents after they treated the boy with a plant, marijuana.

David Brill suffered from multiple seizures every day, sometimes as many as 10.

Finally, his parents had enough and learned that marijuana could be used to treat their son.  The only problem?  The state thinks it is holier than the Creator and deemed a plant illegal.

However, Matthew and Suzeanna Brill determined to help their son and went against the “law” in order to provide some care for him.

A lengthy commentary was provided on a GoFundMe page that was started by the Brills.

Among the details were that Matthew bought some marijuana and tested it out before giving it to David.

However, the results were beyond phenomenal.

After starting the marijuana treatment, David went for 71 days without a single seizure!

“For our son, it was a miracle for him,” Matthew said.

CBS reports on what happened:

Currently, medical marijuana is legal in 29 states and Washington, D.C. Nine states and D.C. allow for legal recreational marijuana. But Georgia has some of the strictest marijuana laws in the country. Physicians are not allowed to prescribe marijuana for medical use and it’s illegal to sell or possess it. But the law does allow those with a state-issued medical card to possess low THC oil.

“The only way he could get a medical card would be a six-year waiting list,” Suzeanna said.

So the Brills, frustrated with traditional prescription medication, took matters into their own hands. Matthew said he smoked the illegally-purchased marijuana first to make sure it was okay before giving it to his stepson.

The Brills were charged with reckless conduct after someone alerted the Georgia Division of Family and Children Services. The couple said they spent six days in jail. On April 20, David was removed from the Brills’ custody. That day, he had a seizure and had to be rushed to a hospital.

David’s parents’ custody was revoked and he now lives 60 miles from them in a group home where… yes, he is having seizures again.

“When I talked to him tonight… the 10-minute phone call I was allowed to have with him, he is on the verge of going into a seizure,” Suzeanna said.

The Georgia Division of Family and Children services issued a statement that said, “Case managers continue to work with the parents…so the family can be restored as quickly as possible.”

“They’re facing real criminal charges,” said criminal defense attorney Rachel Kugel. “I think even if they beat the criminal case… They still are definitely in hot water with regard to Child Protective Services.”

Twiggs County sheriff defended the charges against the Brills, saying, “It is my duty to enforce state law.”

Well, I have to say, it is the duty of the sheriff to protect the people in his county from tyranny and tyrannical “laws.”

Seeing that David went for nearly two months without a seizure and that the state, the sheriff and CPS thinks it knows better, and that he is experiencing seizures once more in their care should be clear enough evidence that the parents here know better what their son needs than they do, and certainly more than the bureaucrats in Georgia do.

“I’m a father that did what it took to make sure my son was okay,”  Matthew said.

Suzeanne told deputies, “I’m willing to face the jail time or the consequences for it if it will help my son,” according to Sheriff Mitchum.

“Because of all of this, we want to move our child and family to a state with the medical resources to help him,” Suzeanne wrote on their GoFundMe page. “We have found a lawyer who is the best of the best. She has reviewed and has been very optimistic in her ability to help us get our son back, and move him to a place where he can be monitored with regulated, specially grown marijuana that is designed to treat his individual needs uniquely. Our son deserves life.”

I agree, and it’s ridiculous that government believes it has any kind of authority to outlaw a plant, especially one that can provide actual relief in a situation like this.

Am I promoting getting stoned out of your mind?  Nope, but this is very much like Prohibition.  It was a bad idea then and it was overturned.  It’s a bad idea now.  The same should happen.