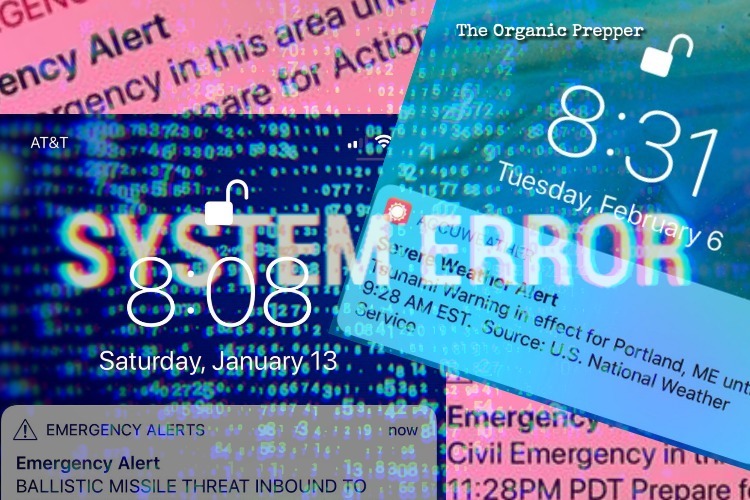 In 2018, there have been at least 4 false alarms that have drummed up panic for no reason at all. It makes you wonder, what’s with all these false alarms? And how can we actually trust an alert that comes to our phone from the Emergency Alert System at all?

The first, of course, was Hawaii, on January 13th. That one scared me personally since one of my dearest friends lives there and I knew it was a time when she wouldn’t be up yet in the morning. I frantically tried to reach her and finally woke her up to tell her the news. A missile was on the way to Hawaii and it was NOT a drill.

The message was sent to cell phones and broadcast on TV and radio stations with the chilling message that residents were to take shelter immediately. Warning sirens went off at resorts and hotels.

It was bedlam in many parts of the island state. Parents were shoving their children into storm drains. After 47 minutes of terror, another alert told the panicked islanders that this had been a false alarm.

It turns out that an employee “hit the wrong button” and sent out the alert. However, people affected were reasonably furious that it took so long to correct the error.

The false alarm in Hawaii was barely out of the headlines when another inaccurate alert was sent to residents of Maine. The alert warned people in the coastal city of Portland that a tsunami was incoming.

While it’s not impossible for a coastal town to be threatened by a tsunami, it’s incredibly rare on the East Coast and Maine has suffered only minor events historically. The biggest tsunami wave ever recorded there was 10 feet high in 1926. It flooded the harbor but there were no deaths.

Despite this, residents near the water were quite rightfully alarmed. It turned out that this was a test message that somehow was accidentally sent as a push notification. AccuWeather and the National Weather Service have both pointed the finger for the error to the other agency.

“Tsunami warnings are handled with the utmost concern by AccuWeather and it has sophisticated algorithms to scan the entire message, not just header words, as from the time of a warning to the actual event can be mere minutes,” the statement said. “AccuWeather was correct in reading the mistaken NWS codes embedded in the warning. The responsibility is on the NWS to properly and consistently code the messages, for only they know if the message is correct or not.”

…The National Tsunami Warning Center said it did not issue a tsunami warning, watch or advisory for any part of the United States or Canada Tuesday morning. The center, based in Palmer, Alaska, issues monthly tests to regional weather offices.

Officials said it appeared to be an issue only with the Accuweather app. (source)

The tsunami warning a few months later in Alaska held a lot more weight since the area is prone to seismic activity and in an area where tsunamis are a more realistic threat.

In May, a truncated version of a test message was sent in error and broadcast by local radio and TV stations. This one did not go to the phones of local residents but was picked up by the media. Because it was abbreviated, the words “this is a test” did not show up and therefore were not broadcast.

What makes matters worse is that earlier in the year, when there was actually a threat after a 7.9 earthquake hit the Gulf of Alaska, the tsunami warning that should have gone out to coastal residents was not received by some Alaskan broadcasters and wireless companies.

Then a couple of days ago, the system in Oregon sent out a mysterious message to Salem residents that had them puzzled and alarmed.

And that was it – no further information was included. Just that there was an emergency and that they should “prepare for action.”

Andrew Phelps, the head of Oregon’s emergency management agency, apologized for the “glitch.” It turns out that this time there actually was a critical situation of which people needed to be aware.

Phelps said late Tuesday that a technical glitch had cut off crucial information: that the alert concerned elevated levels of a natural toxin in a local reservoir. Children and people with compromised immune systems have been told not to drink tap water in the Salem, Oregon, area after an algae bloom caused the spike.

“The integrated public alert warning system inadvertently defaulted to a generic message,” Phelps said in a video posted on the social media by the Office of Emergency Management. “I apologize for the confusion and the anxiety this incomplete message has caused.” (source)

Confusion surrounded the initial alert even within the emergency management agency, with a spokesperson telling reporters the message had caught them unawares and state police asking residents via a Facebook post not to call 911 about the alert. (source)

At that point, people were in panic mode. Stores were quickly emptied of their water supplies and chaos was left in shoppers’ wakes. A reader local to the area sent me a message telling of what had ensued.

I live in Salem Oregon. This evening at 8:30 pm phones across my state went nuts. We received a vague emergency message. A civil emergency is what they called it. You read that and I don’t care who you are, your attention has been grasped.

With power still running I took to social media. My feed was hot. People were freaking out. No one knew what was going on. Finally, word spread and we discovered our tap water is tainted. With toxic algae! They say safe for adults. (Ummm, no thanks). You can’t boil it away. It’s a firm “don’t give kids under 6, elderly, pets, medically compromised, pregnant, and nursing women any tap water.” Period.

At 9 pm we received a far more clear emergency text. And the police took to Facebook as evidently 911 was swamped. Its all over the news. Shelves are empty. People are frightened and panicking and it has only been an hour.

The Emergency Alert System is not working very well.

The Emergency Alert System (EAS) is overseen by the FCC and can be dispatched locally or even at the national level.

The FCC, in conjunction with Federal Emergency Management Agency (FEMA) and the National Oceanic and Atmospheric Administration’s National Weather Service (NWS), implements the EAS at the federal level. The President has sole responsibility for determining when the EAS will be activated at the national level, and has delegated this authority to the director of FEMA. FEMA is responsible for implementation of the national-level activation of the EAS, tests, and exercises. The NWS develops emergency weather information to alert the public about imminent dangerous weather conditions. (source)

The EAS, while a great idea, is sending out so many false alarm warnings that one has to wonder if people will even pay attention in an actual emergency. Theories abound as to why the false alarms are happening, with people pointing fingers toward a wide variety of possibilities:

My advice? It’s the same advice I’d give in any situation. If you think there could be a threat, don’t panic, take the appropriate action, and wait to see how things play out.

But one thing is sure. There are only so many false alarms that can be sent out before the EAS loses all effectiveness. Pretty soon, if not already, people will just roll their eyes and carry on with their days instead of taking action. And if that’s the case, our apathetic society will become even less interested in being prepared for emergencies. There are only so many times you can be spurred to panic for no reason until you’re immune to that particular voice crying “wolf.”

One day when a real disaster is inbound, nobody will pay attention to what is “probably” just another false alarm.

What do you think is going on with the Emergency Alert System? Why is there such a prevalence of false alarms this year? How much credibility would you give a warning like these if you received one out of the blue?