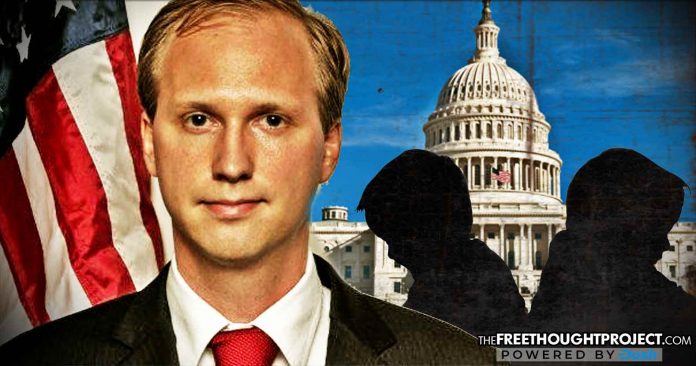 Charlottesville, Virginia – A 37-year-old accountant named Nathan Larson was recently exposed as a rapist and pedophile, but instead of being arrested, he has been able to continue his campaign for a seat in Congress.

Earlier this week, Larson admitted to hosting the websites suiped.org and incelocalypse.today, which acted as a meeting place for pedophiles, white supremacists, and anti-women groups.

“Incelocalypse” is reportedly described as “the day we make the jailbaits our rape-slaves,” on Larson’s site.

In an interview with HuffPost on Thursday, Larson plainly admitted to being a pedophile and said that there was “some truth” to online posts he made where he bragged about raping his ex-wife and fantasized about daughter-father incest.

“Why doesn’t every pedo just focus on making money so they can get a pedo-wife and then either impregnate her with some fucktoys or adopt some fucktoys? That would accommodate both those who are and aren’t into incest. And of course, the adoption process lets you pick a boy or a girl,” Larson wrote in one post last October.

Larson is the parent of a 3-year-old girl, but his parental rights were relinquished following a custody battle with the ex-wife who he bragged about sexually assaulting. She was also able to obtain a restraining order against him following the divorce. Sadly, her side of the story will never be told, because she killed herself in 2015, likely from the trauma inflicted on her during the marriage.

Larson has since remarried, likely to a woman that he views as his property.

In Larson’s campaign platform, he says, “We need to switch to a system that classifies women as property, initially of their fathers and later of their husbands.”

Larson actually believes that he has a chance of winning his campaign, despite the recent revelations about his private life.

“A lot of people are tired of political correctness and being constrained by it. People prefer when there’s an outsider who doesn’t have anything to lose and is willing to say what’s on a lot of people’s minds,”Larson said.

Larson is even more inspired now that a vilified candidate like Trump won a presidential election. “A lot of people who disagreed with someone like Trump … might vote for them anyway just because the establishment doesn’t like them,” he said.

Larson has admitted to being the author of numerous posts inciting rape and violence, including essays with titles such as the following:

“A Man Should Be Allowed to Choke His Wife to Death as Punishment for Cutting Her Hair Short Without Permission, or Other Acts of Gross Insubordination”

In one rant, titled, “Let’s Define What Rape Is,” Larson wrote: “Women are objects, to be taken care of by men like any other property, and for powerful men to insert themselves into as it pleases them, and as they believe will be in women’s own interests. In most cases, their interests are aligned, as long as the man is strong. Female sex-slaves actually get a much better deal than animals, because in most cases, they are allowed to reproduce, unlike animals raised for meat or companionship.”

Larson is a self-described libertarian, and despite being in favor of gun rights and drug legalization, he does not seem to understand the actual philosophy behind the platforms that he espouses.

After news of Larson’s activities was made public, the Libertarian party acted swiftly to prevent him from running on their platform.

LPVA Chair, Bo Brown said in a statement that, “Nathan Larson does not have and will never receive the Libertarian Party nomination. He espouses many archaic and dark ideas that fly in the face of libertarian philosophy. The Libertarian Party believes in equal rights for all people. No matter how he attempts to rationalize his opinions, they are far outside the realm of the Libertarian Party Platform. If he persists in his campaign for office, he will find that his ideas and previous writings are considered repugnant to the people of Virginia and rightfully so.”