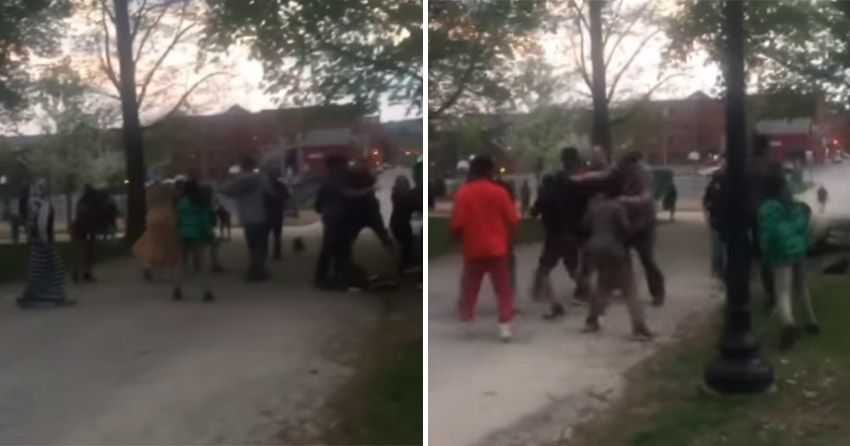 Because our government thinks it proper to import some of these kinds of people, this kind of thing happens.  A mob of Somali Muslim youths attacked park goers with sticks and fists last week in Kennedy Park in Lewiston, Maine.

The mob, which consisted of at least 20 youths, laughed as they beat two men in the park.

Parents in Lewiston say it’s no longer safe to bring their children to Kennedy Park!

Maine First, the organization that put the video out, reported:

The Somali mob attacked around 7:45 pm, just as the sun was setting on this historic city park in the heart of Maine’s second largest city.

A local mother recorded as a mob of teens and children, boys and girls as young as nine years old, brandishing wooden bats and other objects, along with fists, feet and sheer numbers to attack the two non-Somali defenders. At one point you can even here one of the hoodlums repeatedly daring the woman to, “stop me, b**ch.”

Lewiston Police tell Maine First Media one of the victims was taken to the hospital with minor injuries. However, no charges were filed.

Of course, the mayor attempted to downplay the attack.

“Kennedy Park is a large common space in the middle of some of the poorest census tracts in the Northeast,” Mayor Bouchard said. “When you have large, diverse groups of people in the same place you are bound to have incidents. Lewiston is no different in that respect than any other medium to large city, except that Lewiston’s violent crime rate is one of the lowest in Maine.”

Incidents?  This was a mob of unruly, lawless young criminals.  This was not an incident.  It was an attack!

However, the mayor went on to say that the victim didn’t press charges and so, therefore, there was no crime.

“In this particular case, the person who was attacked declined to press charges, therefore under the law, there was no victim, therefore no crime,” said Mayor Bouchard.

Really?  Is there a law these kids violated on the books?  If there is and there is video evidence that such a crime took place, who needs the victim to press charges?  Does anyone think the victim was intimidated into not pressing charges?

“Our community resource officers are reaching out to the leaders in our new Mainer community,” Mayor Bouchard said. “While we are fighting a cultural barrier, outreach to these groups has been successful in the past, and we are hopeful we can make some progress.”

Ah yes, culture barriers.  Apparently, there is not that much success.

This is far from the first incident of Somalian attacks at Kennedy Park. Recently, a 10-year-old girl was jumped and beaten by a Somali girl at the park. As such occurrences become more common in Lewiston, many lifelong residents are now afraid to bring their own children to play.

On any given day, dozens if not hundreds of Somali youth can be found occupying Kennedy Park and the violence is nothing new. Local residents bearing the brunt of these violent mobs are growing frustrated. Maine First Media was told it took police at least 7-8 minutes to arrive on the scene — despite the police station being right across the street from the park.

They went on to report that the mayor does at least hit the nail on the head when it comes to violent kids and that is bad parenting, but added that bad immigration policy has added to the conflicts in the area.

Mayor Bouchard placed the blame for these attacks on several factors but believes a big part of the problem is parenting.

“Bigger picture, children are just not taught respect anymore, and that can be said about children in general, our visible population in that area just happens to be an immigrant population.” Mayor Bouchard said.

Maine First Media certainly can’t argue that teaching kids to respect their elders appears to, unfortunately, be a thing of the past. However, the last part of the Mayor’s statement seems to be a political copout. Remember, the Mayor also put part of the blame on the shoulder of 20-Years of bad immigration policy. So, Mr. Mayor, which is it?

Mayor Bouchard is on record supporting efforts to put “new Mainers” to work. One of the places the Mayor personally put a Somali immigrant with a history of hateful remarks and Leftist political activism to work was on the Lewiston Libary Board of Trustees — where she’ll have a say over what books the library houses and what cultural programs the library sponsors.

However, the Mayor did acknowledge two decades of bad immigration policy.  And the Lewiston Police Department is adding more patrols to the troubled Kennedy Park area. Hopefully, these are signs of steps in the right direction in Lewiston.