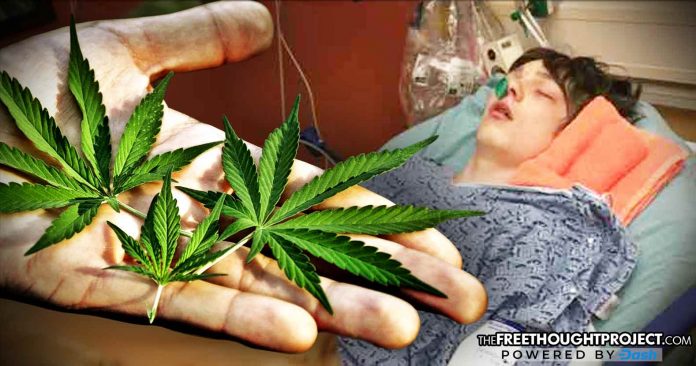 Macon, GA – A teenager who suffers from seizures was forcibly separated from his parents and put into state custody, while his parents were jailed and charged with reckless conduct after they provided their son with marijuana to control his seizure disorder.

Matthew and Suzeanna Brill say they let their 15-year-old son, David, smoke cannabis in a desperate attempt to control his severe epileptic seizures. The couple told the New York Times that their son was having numerous seizures a day and that the pharmaceutical drugs he was prescribed to control his epilepsy failed to work.

Although Georgia ostensibly recognizes cannabis as a treatment for epilepsy by allowing certified patients to possess up to 20 fluid ounces of “low THC oil,” generally recognized cannabidiol oil commonly referred to as CBD, the reality is that there is no way to legally obtain or produce CBD oil without being in violation of Georgia law. Despite having no legal access to cannabis, more than 3,500 people are registered with the state as medical marijuana patients.

“Even with the ramifications with the law, I don’t care,” said Mr. Brill, David’s stepfather. “For 71 days he was able to ride a bike, go play, lift weights. We were able to achieve that with David medicated not from Big Pharma, but David medicated with marijuana.”

A report by the New York Times noted:

The pharmaceuticals weren’t working. The 15-year-old boy was having several seizures per day, and his parents were concerned his life was in danger.

So Suzeanna and Matthew Brill, of Macon, Ga., decided in February to let their son try smoking marijuana — and his seizures stopped for 71 days, they say.

The Brills’ decision led to the boy, David, being taken away from his parents, who face possible fines and jail time after being charged with reckless conduct for giving him the drug.

David has now been in a group home for 30 days, and his seizures have returned. He is separated from the service dog that sniffed out his seizures, and he is able to communicate with his parents only during short visitations and phone calls.

Despite their son being taken from them, the couple maintains that they made the correct medical decision for David. Ms. Brill told the Times that the authorities “want to argue the legality of marijuana instead of taking care of the kid.”

The parents say they informed their son’s doctors about using cannabis to treat his seizures without objection, but that his therapist reported the medical marijuana use to authorities. The call resulted in a visit by the Twiggs County sheriff’s deputies on April 19, who demanded that David stop taking the medicine that had stopped his seizures.

“We complied, and within 14 hours of complying, we were rushing our son to the hospital. It was one of the most horrific seizures I’ve ever seen,” Suzeanna Brill told the Times.

Reason magazine reported that “his parents are fighting to get him back, a process they say may take as long as a year. They are trying to raise money to cover their legal expenses on GoFundMe, where they are more than halfway toward their goal of $30,000.”

Despite the state of Georgia clearly recognizing the potential medical utility of cannabis, and the FDA moving towards approving cannabidiol as a treatment for epilepsy, the state asserts the parents endangered David’s “bodily safety” by “consciously disregarding a substantial and unjustifiable risk,” constituting “a gross deviation from the standard of care which a reasonable person would exercise.”

“Whatever the law is, it’s my job to enforce it,” Mitchum said “The fact is that, as of today, marijuana is not legal in the state of Georgia to possess or smoke or use for recreational use. And that’s it.”

“There’s been a lot of people around the country that apparently has a view on this case,” the sheriff added while noting his office had been overwhelmed by calls from across the country.

Mitchum played a 30-second voice message from an out-of-state man who told the Sheriff, “I’d love to see you (expletives) try to take away my kid from me if I’m giving him the only medicine that works. You piece of (expletives)!”

In an attempt to mitigate the growing controversy, the sheriff went on to state that he could have pressed felony cruelty to children charges against the parents, but said, “that’s not what we’re doing.”

“We’re trying to, on one hand, understand their position if what they’re saying is true,” while “at the very least still doing our job like we’re supposed to do, not turning our head,” Mitchum said, adding “somebody’s got to stand up for the child’s welfare.”

While some studies have shown neurocognitive and behavioral effects of marijuana use in pediatric patients—including its effects on psychological dysfunction, amotivational syndrome, and carcinogenic risk—high-quality clinical trials are currently underway at Children’s Hospital Colorado, with the approval with the state of Colorado and the federal government, related to marijuana use in the treatment and management of a variety of pediatric conditions, including: epilepsy, neuro-oncology conditions, inflammatory bowel disease, as well as the impact of marijuana usage by pregnant mothers on their children.

According to the Mitchum, Suzeanna Brill told a deputy, “I’m willing to face the jail time or the consequences for it if it will help my son.”

Although in violation of the law, this mother clearly had the best interest of her child in mind, thus any criminal charges by the state seem manifestly unjust. Please share this story to help raise awareness about the ongoing persecution of this family!