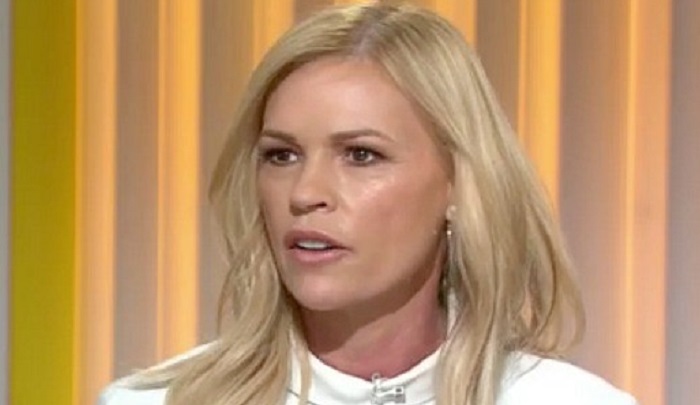 High-profile TV star Sonia Kruger will face a directions hearing next month after failing to have a racial vilification complaint made against her dismissed.

Many Westerners appear not to realize that democracy is finished once the freedom of speech is gone.

The grounds used against Kruger:

It is unlawful under the Anti-Discrimination Act for a person, by a public act, to incite hatred, serious contempt or severe ridicule of a person or people on the ground of race.

Kruger said nothing “racist.” Once again, Islam is not a race. Jihad is not a race. She clearly had no racial intentions: in stating that Australia’s borders should be closed to Muslims, she spoke of the reality of Muslim attacks on infidels, from rapes to jihad murder. She also said that she had “a lot of very good friends who are Muslims, who are peace-loving, who are beautiful people, but there are fanatics.” The free-for-all, suicidal immigration policy that much of Europe has given into shows that there is ample reason for prudence in immigration policy.

Kruger’s “crime” was to agree with a columnist who cited a “correlation between the number of people who, you know, are Muslim in a country and the number of terrorist attacks.” Yet it is no secret that jihad terrorists are waging war against the West, and all of them happen to be Muslim.

The alternative to heeding Kruger’s words is that like many countries in Europe, Australia will now get used to spiraling crime, jihad attacks, no-go zones, sharia patrols, mass Muslim prayers in the streets, calls to prayer on loudspeakers that declare Islam above all religions, sharia courts, and the like. All the while, infidels must shut their mouths and bear it all, because it is now considered a crime to insult Islam.

A complaint against her July 18 comments was made by Sam Ekermawi, a Muslim living in Australia who claimed the Nine Network vilified “ethnic Muslim Australians”….In an email last March to the Anti-Discrimination Board of NSW, he wrote, “Kruger wants borders closed to Muslims, in that she’s implying that they are terrorists to dehumanise them.”

Kruger has implied no such thing. The problem is that there is no reliable way to distinguish jihad terrorists from peaceful Muslims. Kruger’s words should be the beginning of open discussion of these issues; instead, the way she is being treated proves her point all the more.  The citizens of Australia are in for a rude awakening if they continue, like so many other countries, to allow themselves to be bullied by Islamic supremacists and their leftist dhimmis allies, using charges of “racism” to silence and demonize their opponents.

High-profile TV star Sonia Kruger will face a directions hearing next month after failing to have a racial vilification complaint made against her dismissed.

On July 18, 2016, an emotional Kruger, 52, kicked off a social media storm by telling Nine’s Today show viewers that Australia’s borders should be closed to Muslims.

While discussing a newspaper article written by News Corp’s Andrew Bolt, Kruger said she agreed that the columnist “has a point here, that there is a correlation between the number of people who, you know, are Muslim in a country and the number of terrorist attacks.

“Now, I have a lot of very good friends who are Muslims, who are peace-loving, who are beautiful people, but there are fanatics.

“Personally, I would like to see [Muslim immigration] stopped now for Australia.

“Because I want to feel safe, as all of our citizens do, when they go out to celebrate Australia Day.”

Kruger called attention to Japan, which she claimed has 100,000 Muslims in a population of 174 million: “We never hear of terrorist attacks in Japan.”….