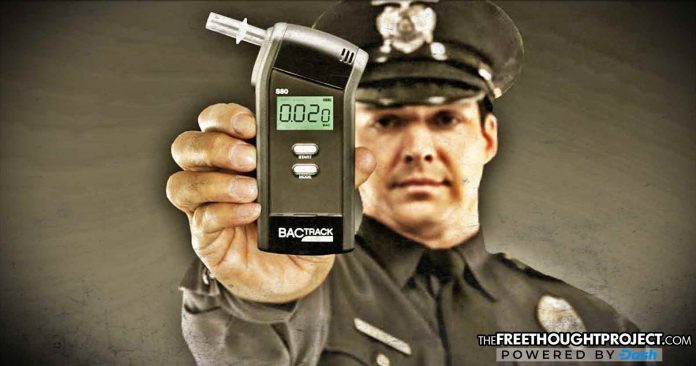 Hundreds of thousands of motorists were able to avoid breathalyzer tests in the past 5 years in the Victoria region of Austrailia because police officers were falsifying tests to meet their quotas. In many cases, when cops are forced to meet quotas, they arrest as many people as they possibly can—but these officers just pretended to do the work, instead of targeting the public.

An internal investigation has found 258,000 alcohol breath tests, which represents about 1.5 percent of the 17.7 million tests that were conducted in that time, according to a report from The Age.

Assistant Commissioner Russell Barrett said that officers likely blew into the breathalyzers themselves or held their finger over the straw when it was being administered.

“I’m confident to say that number [258,000] were falsified. It’s terrible. It’s terrible behavior when we’re the leader of road safety in the state. The question we all asked was why? There could be a number of reasons but the main rationale I believe is to hide or highlight productivity. Whatever reason our workforce may come up with, it isn’t acceptable,” Barrett said.

“No one can be falsely prosecuted, but it’s still terribly terrible behavior. The community trusts us to do our job and we trust our members to do that job,” he added.

Investigators caught on to the activity when they noticed how close together breathalyzer tests were taken, making it physically impossible for officers to go from car to car in such a short amount of time. Checkpoint sites that were supervised did not have these problems, so the police force is looking for options to make sure that officers administer the tests.

“In moving forward we are looking into a number of options for improving and increasing our internal controls and accountability in regard to our testing regime. We are considering the feasibility of regular audits, the ability for the PBT to include the detail of the operator and quality assurance in relation to the issuing and distribution of straws,” Barret said.

Since the breath tests are shared among the officers, it will likely be impossible to determine which officers were responsible for the tampering.

“Due to the extended timeframe of data analyzed and many variables within the complex data set, including members who may have moved on from a work location, what will occur is that workplace guidance will be provided to all workplaces across the organization,” Barrett said.

As it stands right now, the way the state deals with drunk driving is tyrannical and infringes upon everyone’s rights—even people like myself, who hardly ever drink. Economist Jeffrey Tucker wrote an article on this subject and discussed the problems with the status quo while offering some solutions, as well. In his article, he said:

“Laws against drunk driving have vastly expanded police power and done nothing to stop the practice. The best prevention against unsafe driving from drinking has been provided privately: friends, services offered by bars and restaurants, community interest groups, etc. This is the humane and rational way societies deal with social risks. The police have only messed up this process by adding a coercive element that targets liberty rather than crime.

And we can see where this is heading. Texting is now illegal in most places. So is talking on the phone. Maybe talking itself should be illegal. Some communities are talking about banning eating. All of this is a distraction from the real issue.”

Radley Balko, senior editor at Reason Magazine, has argued that drunk driving laws should be abolished altogether on the basis that “if lawmakers are serious about saving lives, they should focus on impairment, not alcohol.”

“If our ultimate goals are to reduce driver impairment and maximize highway safety, we should be punishing reckless driving. It shouldn’t matter if it’s caused by alcohol, sleep deprivation, prescription medication, text messaging, or road rage. If lawmakers want to stick it to dangerous drivers who threaten everyone else on the road, they can dial up the civil and criminal liability for reckless driving, especially in cases that result in injury or property damage.

Doing away with the specific charge of drunk driving sounds radical at first blush, but it would put the focus back on impairment, where it belongs. It might repair some of the civil-liberties damage done by the invasive powers the government says it needs to catch and convict drunk drivers. If the offense were reckless driving rather than drunk driving, for example, repeated swerving over the median line would be enough to justify the charge. There would be no need for a cop to jam a needle in your arm alongside a busy highway.

Scrapping the DWI offense in favor of better enforcement of reckless driving laws would also bring some logical consistency to our laws, which treat a driver with a BAC of 0.08 much more harshly than, say, a driver distracted by his kids or a cell phone call, despite similar levels of impairment. The punishable act should be violating road rules or causing an accident, not the factors that led to those offenses. Singling out alcohol impairment for extra punishment isn’t about making the roads safer. It’s about a lingering hostility toward demon rum.”

There is no doubt that drunk driving should be discouraged and that solutions to prevent people from driving drunk should be explored. However, it is entirely possible to do this without violating anyone’s rights in the process.