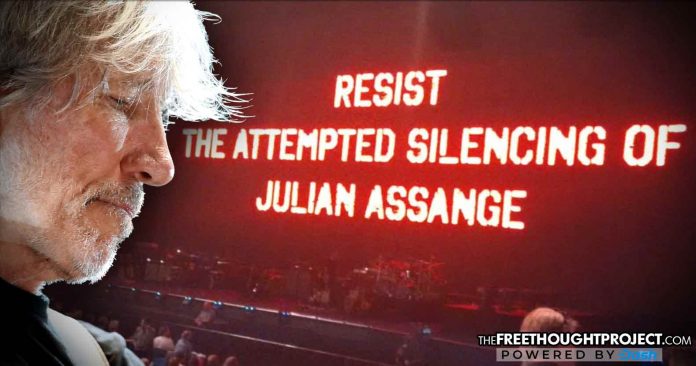 Pink Floyd co-founder Roger Waters showed solidarity with Julian Assange during a concert in Berlin by unveiling a message in red text projected onto a black backdrop, which read “Resist the attempted silencing of Julian Assange,” before the start of his concert.

"Resist the attempted silencing of @JulianAssange"

Waters’ show of support for the WikiLeaks founder happened as supporters and friends of Assange came together for an online vigil featuring a diverse group of high-profile supporters of all political stripes for the Unity for J /#Unity4J event. They called for the end of Assange’s “arbitrary detention” inside of the Ecuadoran Embassy in London and advocated for Assange’s freedom and protection.

The online vigil for Assange comes in response to his continued silencing by the Ecuadorian government, which cut his internet communications with the outside world at their London embassy on March 28 and began denying him communications or visitors, claiming that his posts on social media put the country’s international relations “at risk.”

This is the only tweet the government of Ecuador asked to be removed. In an email to his London lawyers on 27 March at 14:54 BST the Ecuadorian foreign ministry referenced no other matter.

In a recent interview with the German broadcaster Deutsche Welle, Ecuadorian President Lenín Moreno said that Assange could continue his asylum in the embassy but must adhere to the specified conditions—otherwise, Ecuador “will make a decision.”

“Do not forget that his asylum status prevents him from talking about politics and intervening in friendly countries’ politics. We have cut off this line of communication,” Moreno told DW.

Assange has essentially been barred from practicing journalism if he wants to maintain his asylum while remaining subject to arrest in Britain for jumping bail. Additionally, it is believed that there is a secret grand jury indictment against Assange—thus he fears a likely U.S. extradition, based on his leaking of classified documents, if he is arrested in the UK.

Ecuador initially granted Assange asylum in 2012, under then-President Rafael Correa, who repeatedly tried to find a solution that would allow the WikiLeaks founder to leave the embassy without the threat of arrest. Assange has been living in Ecuador’s embassy for almost six years, in what a UN panel describes as “arbitrary detention,” after seeking asylum from persecution.

In December 2017, Ecuador granted citizenship to Assange, in a failed bid to provide him with diplomatic immunity. President Moreno, who was elected last year, has previously said that Assange was “more than a nuisance,” and called him an “inherited problem.”

Pink Floyd’s Roger Waters is known for using his musical platform to make powerful political statements that often go against the mainstream narrative. During a solo concert in Barcelona in last month, Waters stopped mid-concert to address the U.S. bombing of Syria—which took place under the pretense of retaliation for an alleged chemical attack—to call out the White Helmets.

“The White Helmets is a fake organization that exists only to create propaganda for jihadists and terrorists,” Waters said. “That’s my belief. We have opposing beliefs. If we were to listen to the propaganda of the White Helmets and others, we would be encouraged to encourage our governments to start dropping bombs on people in Syria. This would be a mistake of monumental proportions for us as human beings.”

Waters has been an activist throughout his career and taken a number of controversial stances while calling out the means by which the entertainment industry works to propagandize and socially engineer society. He explained, in 2016, that the entertainment industry discourages individuals from calling out the atrocities committed by the Israeli military, and how the “boycott, divestment and sanctions” (BDS) campaign was targeted:

The only response to BDS is that it is anti-Semitic, I know this because I have been accused of being a Nazi and an anti-Semite for the past 10 years. My industry has been particularly recalcitrant in even raising a voice [against Israel]. There’s me and Elvis Costello, Brian Eno, Manic Street Preachers, one or two others, but there’s nobody in the United States where I live. I’ve talked to a lot of them, and they are scared s***less.

“If they say something in public they will no longer have a career. They will be destroyed. I’m hoping to encourage some of them to stop being frightened and to stand up and be counted because we need them. We need them desperately in this conversation in the same way we needed musicians to join protesters over Vietnam,” he added.

When entertainers and musicians attempt to break through the imposed Matrix of propaganda the plutocratic oligarchy and their media cronies work diligently to marginalize them into obscurity. It is important for people to understand that voices for freedom are being intentionally silenced when they go against the “approved” narrative, thus it being incumbent upon us to share the message of freedom, and no matter what your political ideology—support human rights and justice for Julian Assange!