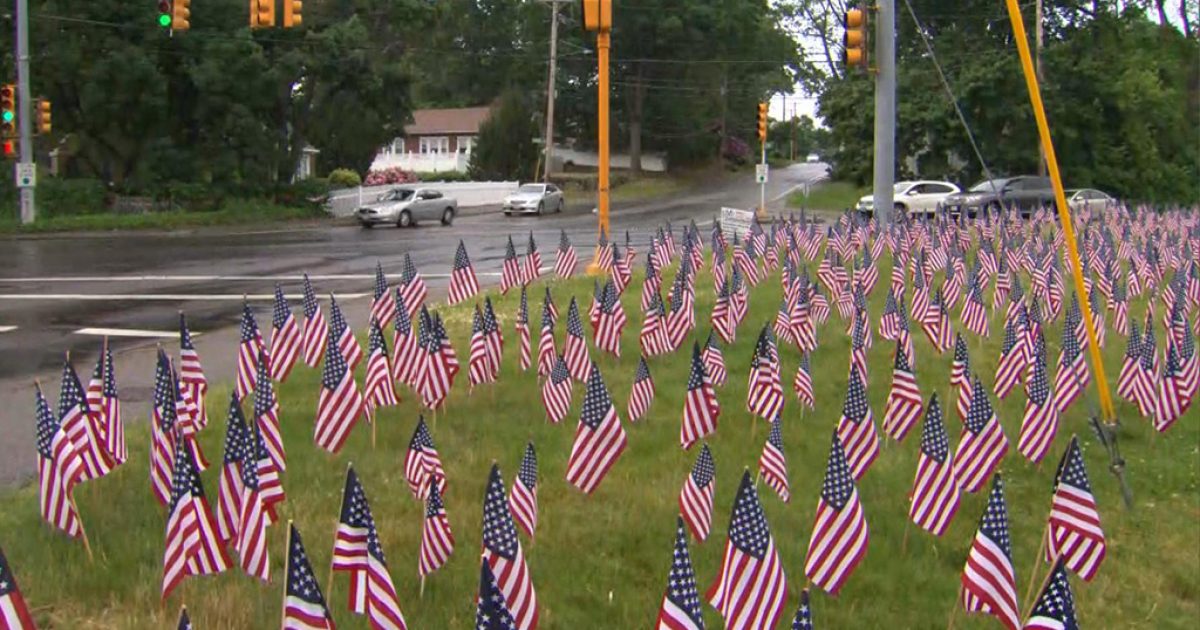 Traditions, which are inherently American, are under constant attack by anti-constitutionalists, immoral, anti-constitutionalist elected bureaucrats, and hosts of non-citizen individuals who hold disdain for this republic – yet, these non-citizens reap the benefit of government social programs.  From removal of prayer in schools to removing the National Anthem at the start of sporting events, American citizens have watched as a “war” has raged against anything and everything considered American tradition.  Recently, a Massachusetts business came under fire by the town city hall for its tradition of placing one American flag for every American in their town who died serving this republic and honoring those who have served.

The town of Chelmsford says a flag display has gone too far. The issue is their location.

“On Saturday we came out and we lined this with 200 flags in support of our deceased veterans and all the people who have served,” says Jon Crandall who works at Laer Realty in Chelmsford.

He’s talking about small American flags planted in front of that business for Memorial Day. When he went to work Friday, there was a surprise. “There was a note in the door from the building department stating we had a violation, a flag violation, excessive flags,” he says.

According to the report, this is not the first time Laer Realty has displayed the flags for Memorial Day. In fact, Laer Realty maintains this flag display from Memorial Day through July 4th, Independence Day.  However, this is the first year in which the local government objected.

The problem, according to the government, is a town bylaw stating flags cannot be used for “commercial promotion.”

According to Michael McCall, Assistant Town Manager for Chelmsford, “This is a commercial establishment located at a busy intersection. It was in the front lawn of that particular property, and in the opinion of our code enforcement officer, the building commissioner, it was a violation.”

So, the opinion of the code enforcement officer determined there was a violation this yearbut not in previous years.  Did code enforcement officers change or has the anti-constitutional, anti-American, immoral attitude and beliefs surface to inhibit a business from participating in their long held tradition of celebrating Memorial Day?  Moreover, since when is participating in a unique tradition of remembering fallen veterans and honoring those who serve using flags as “commercial promotion?”  What has changed in the local government in the town of Chelmsford to now cite a business for a flag violation when it has not been cited in previous years?

Jon Crandall stated, “We feel this is a patriotic act. It’s not about our business. It’s about supporting our troops, supporting veterans.”

Crandall and Laer Realty responded to the town’s citation by adding more American flags to their display, bringing the total to 500 flags.

“I think the flags speak for themselves.  I don’t think we need to get into a fight with city hall,” Crandall stated.

The town government hopes the business will contact them to discuss the number of flags.  The video report can be viewed here.

The “bylaw” the code enforcement officer used to cite the business is contained in Chapter 195 “Zoning”, Section 195-108 “Word Usage and Definition.”

Any device designed to inform or attract the attention of persons not on the premises on which the device is located. Any building surfaces other than windows that are internally illuminated or decorated with gaseous tube or other lights are considered signs. The following, however, shall not be considered signs within the context of this chapter:

(1) Flags and insignia of any government, except when displayed in connection with commercial promotion.

It seems the code enforcement officer can use extreme discretion to determine when a “flag and insignia of any government” is used as “commercial promotion,” including a business display to honor fallen veterans on Memorial Day that has been taking place for years.  There is no mention of a “limit” on the number of flags or a maximum allowed.  So, if a Mexican Restaurant “displays” a Mexican flag in the town of Chelmsford, could that be considered “commercial promotion”, particularly in connection with May 5th?  Being no number is mentioned, the answer could be yes.  But, the town allows the code enforcement officer to exercise “discretion.”  What about a Mexican flag insignia on a building containing a Mexican food supply store?

Guarantee you, a dollar to a dime, the code enforcement officer does not have any problem with the Mexican flag being used for “commercial promotion” as is often seen at Mexican restaurants and Mexican food stores.  But, display American flags in remembrance of fallen American veterans and in honor of the same on a national day to remember the fallen, the code enforcement officer determines it a “commercial promotion” – this year, despite the business tradition of erecting this display for years.

The action by this town and its “code enforcement officer” is nothing but an attack on traditions that are solely American.  How many residents in the town of Chelmsford doesn’t know Laer Realty’s tradition?  Probably, not many.  And, the town government knows it very well.  But, with the 2016 election, anything uplifting this republic, reminding citizens of the roots of our republic, honoring those who died to maintain freedom, and exercising rights to free speech are under attack at all levels of governance.

The election of Donald Trump to the presidency signaled to anti-constitutional, anti-American individuals that a majority exists who value freedom and liberty – that anti-constitutionalism and anti-Americanism was not the prevailing attitude.   Therefore, government anti-constitutional, anti-American, immoral bureaucrats had to start working to quell patriotism by attacking American freedoms and traditions with a fervor never seen before in this republic.  The message is plain, clear and cannot be misconstrued – any and everything that is uniquely American is unacceptable.  Whether it be upholding the law, recognizing and protecting God-given individual unalienable rights, or remembering and honoring those who died and served to award and maintain our freedoms, government will no longer tolerate these values, principles, and displays of such.  Anyone or business doing so will come under attack.

Kudos to Jon Crandall and Laer Realty for standing their ground against the “opinion” of a code enforcement officer who cannot distinguish between a tradition of flags being used for remembrance of fallen veterans and those men and women who have served and flags being used for “commercial promotion.”