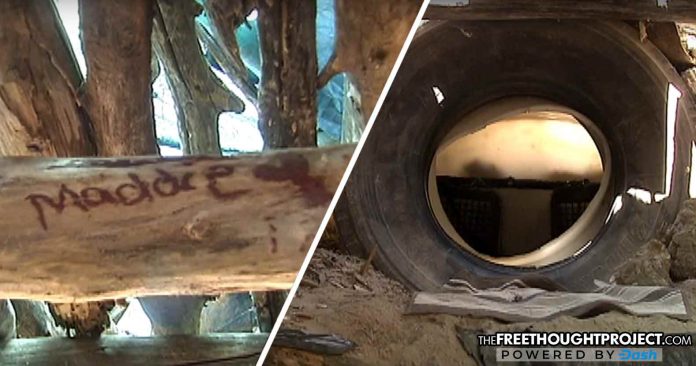 Tucson, AZ — A group of veterans, known as Veterans on Patrol (VOP), has come forward to the media after discovering a disturbing underground bunker in Tuscon. According to the group, the bunker is being used for child trafficking.

VOP is a group that looks for homeless veterans around the area and offers them help to get them on their feet. Last week, they spotted some solar lights while on patrol and followed them out into the woods. The group thought they were about to walk up to a homeless camp but found something that appeared to be sinister in nature.

When the veteran group reached the site, what they found was truly disturbing. Around the site, the group found trees equipped with restraints. They also found a stroller, a crib, hair dye, and pornographic material.

“The solar lights are what gave it away,” said Lewis Arthur. “If we hadn’t been walking on the right trail we would have never seen it, we would have walked right past it.”

Upon further exploration of the site, the veterans found an underground bunker which they say was used to keep children from escaping. Inside the bunker, they found a dresser and two crates. The area was only big enough for children to fit inside.

After discovering this most horrendous site, VOP contacted Tucson News and the police and brought the camera crew out there to document it. Craig Sawyer and Jerry Peyton, a former Navy Seal and Tucson firefighter, explained to Tucson News what they thought of the site.

“I didn’t expect to see something this heinous and inhumane this close,” said Sawyer.  “I served in the military to keep things like this from happening here that’s why I risked my security, so nobody here would have to put up with this.”

Sadly, however, human trafficking in the United States is still extremely common which has prompted groups like VOP and Veterans for Child Rescue (V4CR) to begin taking action on a personal level.

“I have heard of rooms full of kids in houses and basements and things like that, but nothing underground like this, like an underground cell that’s pretty creepy,” said Sawyer.

After several news crews visited the site last week, police were seen at the site taking photos and documenting the scene. They said they have turned over the evidence to detectives according to KVOA.

Sawyer explained that it looked like this site was still active and noted that digging for another underground bunker nearby was also underway.

“In fact there’s another one nearby that they found that they are already digging with fresh tools and fresh dirt,” Sawyer told Tucson News.

While it is entirely possible that this camp could be used by homeless people, the presence of the stroller, crib, and the bunker that can only fit children is highly suspicious. The straps on the trees, which the veterans said look like restraints are also disturbing.

Below is the original video taken when it was first discovered.

Below is the news report on the site.

On Sunday, things came to a head as the VOP team was confronted by police and refused to leave the area, claiming they had evidence of unspeakable crimes. It is still going on today.

As TFTP has previously reported, veterans groups fighting child trafficking is a rising trend, some of them are even sanctioned and funded by government. Since 2013 one organization has aimed to fight back against pedophiles across the United States: the HERO — Human Exploitation Rescue Operative – program gives veterans injured, ill or wounded in the line of duty, training in computer forensics, to work with federal agents in fighting back against pedophiles who use the internet to sexually exploit children.

The Hero Child Rescue Corps is a government-funded project that trains the veterans to hunt child predators — developed by the National Association to Protect Children (Protect), and in conjunction with Homeland Security Investigations (HSI) and U.S. Special Operations Command (SOCOM), the veterans receive 11 weeks of intensive training and 10 months of on-the-ground experience, CNN reports.

Hopefully, thanks to this dedicated group of volunteers, the ever increasing industry of child trafficking will begin to wither away.