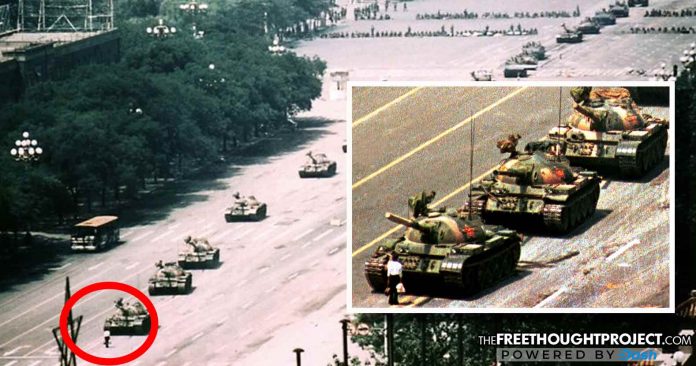 In June of 1989, over one million brave Chinese citizens made a massive protest against corruption in their government and a demand for greater civil liberties. They launched a hunger strike and occupied the now-world famous landmark of Tiananmen Square. Their bravery and courage in the face of tyranny, however, was met with swift and horrifically violent action from the state. This violence would be written on the walls of history in blood and would forever be known as the Tiananmen Square Massacre.

Tiananmen Square serves as a brutal reminder that governments—including US allies—will enact violence against their citizens for peacefully seeking change. And, when those citizens have been systematically stripped of their right to self defense and disarmed, that violence is unchecked.

Following the death of Hu Yaobang, a reform-minded party leader who represented transparency within the Chinese government, on April 15, 1989, unrest began to flow through the streets. Because Yaobang was apparently one of the only honest politicians in the Chinese government, his death was the spark that set off the wildfire of protests that ended in Tiananmen Square.

After six weeks of protest from its citizens, Deng Xiaoping’s governing Communist Party of China (CPC) declared martial law in the capital to quash the rising descent. The government called in 200,000 heavily armed troops to clear the streets.

On June 4, the government told demonstrators they had one hour to vacate the square or they would face violence. However, just five minutes later, the 27th Group Army opened fire on the one million young Chinese citizens and slaughtered them like fish in a barrel.

From the rooftops above the square, snipers rained down hellfire on the unarmed citizens. The wounded were bayoneted as they begged for their lives. Even the unarmed troops who had gone in to disperse the crowds were mowed down by their fellow troops driving armored personnel carriers. Blood literally flowed through the streets as bodies were bulldozed away to be incinerated.

The Chinese government, who has banned any mention of the massacre in the media, counted the official death toll at 300. However, according to a secret British diplomatic cable—written just 24 hours after the massacre—at least 10,000 people were killed.

Sir Alan Donald, then-British ambassador to China, received this account first hand and its detail is nothing short of chilling.

“27 Army ordered to spare no one,” he wrote. “Wounded girl students begged for their lives but were bayoneted.

“A three-year-old girl was injured, but her mother was shot as she went to her aid, as were six others.”

Sir Alan wrote, “1,000 survivors were told they could escape but were then mown down by specially prepared MG [machine gun] positions.

“Army ambulances who attempted to give aid were shot up, as was a Sino-Japanese hospital ambulance. With medical crew dead, wounded driver attempted to ram attackers but was blown to pieces by anti-tank weapon.”

The very next day, after watching 10,000 of his fellow citizens get slaughtered like animals, an unlikely and anonymous hero would rise from the carnage and become an icon to freedom and the importance of resisting tyranny. This brave young man, while walking back from the grocery, decided enough was enough.

Knowing full well that these troops had just slaughtered thousands of his fellow citizens, this gallant young man walked out in the road and single-handedly stopped an army of Chinese tanks—forever earning him the name, Tank Man.

While the common zoomed in images show a few tanks in front of him, the zoomed out image below shows the scope of his actions on a truly massive scale.

This brief moment of bravery would serve as an inspiration to others for decades to come. Tank Man’s identity would never be known and his fate would remain a mystery. But his legacy would serve as a reminder that sometimes, even the smallest gesture—backed by enough courage—could have revolutionary implications.

On the day after one of the most violent slaughters in recent history—by himself—Tank Man showed the world that the people would continue to resist. Now, however, this resistance is more important than ever as the Chinese government has continued to attempt to wipe this stain from their history through censorship and propaganda.

“Tank Man has been a visual totem for protests of China since 1989. But it is also fading away due to brutal censorship and sophisticated propaganda from the Chinese government,” the Chinese cartoonist known as Badiucao, who now lives in Australia, said on his website. “The only way to keep it alive is to represented [sic] it creatively and bring the figure relevant to what is happening contemporarily.”

Since that day, the CPC insisted the massacre was necessary to avoid a “counter-revolutionary riot.” Although governments throughout the world originally decried the violence, months later, countries like the United States went back to business as usual.

However, because of Tank Man’s bravery, the symbolic stance against tyranny lives on and is evident from the countless posts on social media from around the world.

The world would do well to listen to the advice of Badiucao who explains how Tank Man represents “something lost in China’s young generation now — the idealism, passion, sense of responsibility, and confidence that an individual can make a change,” he said. “Tank Man is very relevant today and people should see it. Society has not changed much since the massacre for the oppression has never stopped.”

Indeed, Tank Man embodies the very essence of the phrase of “give me liberty or give me death.” When someone tries to tell you that nobody can stop a tyrannical government with all their tanks and weapons, tell them that nobody already did—and we call him Tank Man.