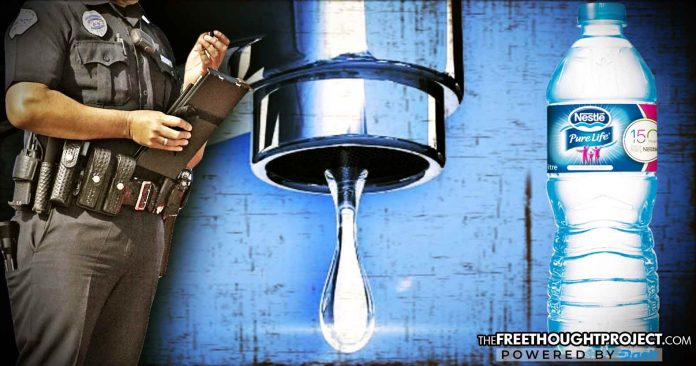 California has become the first state to pass a law severely limiting the amount of water residents can use on a daily basis, and while politicians claim that the restrictions will be enforced in the name of conserving water, Nestlé is illegally stealing millions of gallons of water each year and the state is doing nothing to stop it.

Gov. Jerry Brown signed Senate Bill 606 and Assembly Bill 1668 into law, both of which set new standards for “water management planning.” The restrictions will fully take effect by 2022, limiting residents to 55 gallons of water per person, per day. That number will decrease to 50 gallons per person, per day, by 2030.

“The bill would impose civil liability for a violation of an order or regulation issued pursuant to these provisions, as specified. The bill would also authorize the board to issue a regulation or informational order requiring a wholesale water supplier, urban retail water supplier, or distributor of a public water supply to provide a monthly report relating to water production, water use, or water conservation.”

To put the allotted daily amount of water into perspective, a report from CBS Sacramento noted that “an 8-minute shower uses about 17 gallons of water, a load of laundry up to 40, and a bathtub can hold 80 to 100 gallons of water,” meaning that residents would have to give up showers on the days they wanted to wash one load of laundry, and taking a bath would be nearly impossible.

That is not to mention the fact that each time an individual flushes a toilet, up to 7 gallons of water is used, and around 6 gallons of water is needed for a full dishwasher cycle. If a family fails to budget how much water is being used by each child during the course of a day, or their home has a water leak they are unaware of, they could end up facing massive fines.

Residents will face fines if they fail to comply with the initial 55-gallon per day water limit, and water districts will be required to set targets for water use with outdoor water allowances based on the region. The Pacific Standard also noted that “beginning in 2027, districts that exceed their annual budgets will face fines of $10,000 per day.”

Residents told CBS Sacramento that they are concerned about the new regulations and whether they will be able to comply without giving up basic necessities. Tanya Allen, a mother who lives with her 4-year-old daughter, said, “With a child and every day having to wash clothes, that’s, just my opinion, not feasible. But I get it and I understand that we’re trying to preserve…but 55 gallons a day?”

While California residents prepare for a new crackdown on water usage that could cost them thousands of dollars in fines, it raises the question: Is California conserving water in all aspects, or are residents being forced to cut back while corporations have free reign, and the government fails to intervene?

In December 2017, The Free Thought Project reported that Nestlé has been illegally extracting more than 60 million gallons of water per year from California’s San Bernardino National Forest—which amounts to billions of gallons of water stolen over the last 68 years—even though it lacks the legal rights and has never provided a valid basis of right to the water.

The glaring misconduct was detailed in an investigation conducted by the California State Water Resources Control Board, which revealed that Nestlé reports “diversions under 11 groundwater records under the State Water Board’s Groundwater Recordation Program,” and from 1947 to 2015, Nestlé’s reported extractions “averaged 192 acre-feet, or 62.6 million gallons, per year.”

“The State Water Resources Control Board (State Water Board), Division of Water Rights (Division) received several water rights complaints against Nestlé Waters North America (Nestlé or NWNA), starting on April 20, 2015. The complaint allegations included diversion of water without a valid basis of right, unreasonable use of water, injury to public trust resources, and incorrect or missing reporting, all regarding Nestlé’s diversion of water from springs at the headwaters of Strawberry Creek in the San Bernardino National Forest (SBNF) for bottling under the Arrowhead label. Many of the complainants emphasized their concerns about the impacts of Nestlé’s diversions during California’s recent historic drought.”

Multiple complaints have been filed against the corporation, and even after an investigation by a state agency revealed that billions of gallons of water have been stolen over the last 70 years, no one has been charged for their role in the illegal scheme, and Nestlé continues to steal the drought-stricken state’s most precious resource.

As is typically the case when big government turns a blind eye to the corrupt actions of big corporations, the residents of California—who are forced to fund their government through taxes—are the ones who suffer from the lack of water. At the same time, the new regulations that are being put in place in the name of conserving water are actually the latest cover-up to shield both the state and the corporations it is protecting from any form of legitimate accountability.