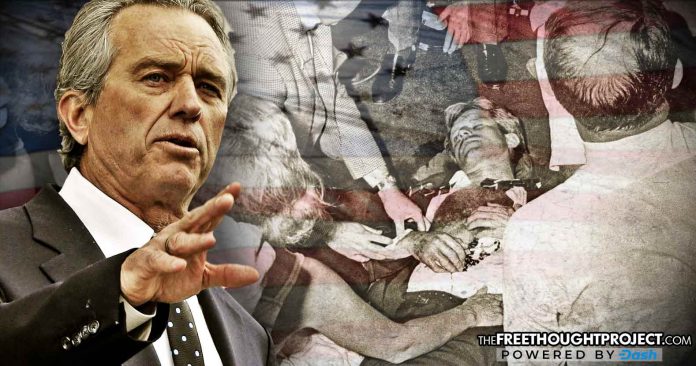 On June 5, 1968, Senator Robert F. Kennedy had just won the California Democratic presidential primary when he was shot following a speech at the Ambassador Hotel in Los Angeles. As Americans remember the tragic night 50 years ago, Kennedy’s son is joining with one of the survivors of the shooting to call for a new investigation.

Below are five bombshell reasons explaining exactly why Robert Kennedy Jr. is justified in calling for this investigation into who killed his father.

1. Forensic scientists claim the audio of the shooting includes 13 shots from two guns, but the “lone gunman” blamed for the shooting only had one gun with eight bullets

Sirhan Sirhan was quickly convicted of shooting and killing Kennedy, and he was labeled as the “lone gunman” in the assassination. According to reports, he opened fire on Kennedy with a .22-caliber revolver from three feet away, while the presidential candidate was greeting staff members in the hotel’s kitchen.

Sirhan’s first bullet hit the head of Kennedy’s aide, Paul Schrade, who was standing six feet behind Kennedy. His second bullet missed completely, and he fired the last six bullets, wounding four other people before he was taken down by two hotel staff members who grabbed his gun. However, while it was only physically possible for Sirhan to have fired eight shots, audio expert Phil Van Praag determined that 13 shots had been fired from at least two guns.

2. The autopsy report shows the bullet that killed Kennedy entered his skull behind his right ear—but Sirhan was standing in front of him

The timing and layout of the shooting placed Sirhan in front of Kennedy the entire time, but the autopsy report showed that the fatal shot that took Kennedy’s life, entered his skill from behind his right ear. Yet investigators have failed to explain the multiple other bullet holes that were found in the kitchen, or how it was possible for Sirhan to have fired the shot that killed Kennedy.

After he survived the shooting, Schrade has devoted years to pushing for a new investigation and calling for justice for Sirhan—the man who allegedly shot him in the head. In a statement, Schrade said, “The LAPD and LA DA knew two hours after the fatal shooting of Robert Kennedy that he was shot by a second gunman and they had conclusive evidence that Sirhan Bishara Sirhan could not and did not do it. The official record shows that [the prosecution at Sirhan’s trial] never had one witness—and had no physical nor ballistic evidence—to prove Sirhan shot Robert Kennedy.”

3. Multiple witnesses have testified that there was a second gunman

In addition to Schrade’s claim that a second gunman was responsible for Kennedy’s death, actress Nina Rhodes-Hughes was a witness to the shooting, and she has testified that she believes there was more than one shooter. She was behind Kennedy when the shooting started, and while she remembers seeing Sirhan in front of her, she claims she heard multiple shots fired from her right-hand side.

Rhodes-Hughes told the Vancouver Sun that not a single police officer questioned her the night of the shooting, and it was more than a month before FBI agents arrived at her home for an interview. She said even though she told them that she heard 12 or 13 shots ring out, the agents’ notes claimed she said she heard eight rounds—the exact number of bullets in Sirhan’s gun—and she was never called to testify in court.

4. Sirhan has spent 50 years claiming he does not remember shooting Robert Kennedy

Sirhan has adamantly claimed that he does not remember the shooting or the events surrounding it. Harvard psychologist Dr. Daniel Brown spent 60 hours interviewing Sirhan over the course of three years leading up to his last parole hearing in 2011, and he determined that Sirhan had likely been subjected to coercive suggestive influence and hypnotic programming.

As The Free Thought Project has reported, the CIA’s MKUltra program was ongoing at the time and Dr. Brown’s colleague, former Georgetown Law Professor Alan Scheflin, “discovered at least three redacted documents describing ‘successful assassinations’ in other countries using the unconscious assassination method,” in which a combination of sensory deprivation, hallucinogenic drugs and hypnosis were used to train unconscious assassins.

5. Police have been accused of destroying evidence, threatening witnesses and intentionally ignoring the possibility of a second shooter.

Los Angeles Police and prosecutors have faced heavy scrutiny in the years since they were instrumental in Sirhan’s conviction. Prosecutors intentionally withheld the autopsy report from Sirhan’s defense lawyers for the first six weeks of the trial, and police “failed to investigate an armed private-security guard who was walking behind Kennedy at precisely the angle where the fatal shots to Kennedy’s head and back were fired,” according to a report from the Washington Post.

In addition to failing to prevent vital evidence at the trial, Los Angeles Police burned 2,140 police photographs related to the shooting, and incinerated thousands of documents and pieces of evidence from the case, including doorframes with bullet holes that proved more than eight shots were fired.

Kennedy was pronounced dead 26 hours after he was shot and while there have been many theories surrounding his death, the 50th anniversary marks the first time his son, Robert F. Kennedy Jr. has openly called for a new investigation and after visiting the convicted killer in prison, he has said he does not believe that Sirhan Sirhan was responsible for his father’s death.

“I got to a place where I had to see Sirhan,” Kennedy said just after he visited and talked to the man sitting in jail for killing his dad. “I went there because I was curious and disturbed by what I had seen in the evidence,” said Kennedy, an environmental lawyer and the third oldest of his father’s 11 children. “I was disturbed that the wrong person might have been convicted of killing my father. My father was the chief law enforcement officer in this country. I think it would have disturbed him if somebody was put in jail for a crime they didn’t commit.”