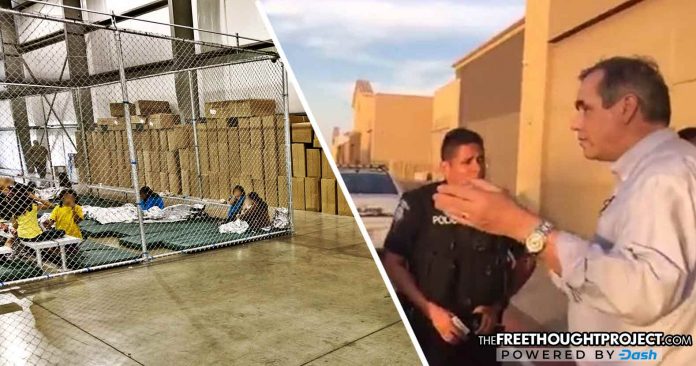 In 2015, Snopes attempted to fact-check “rumors” that “began to swirl in April 2015 when several Walmart stores around the U.S. were abruptly closed due what Walmart claimed were “plumbing problems.“ Walmarts in Pico Rivera, CA, Livingston, TX, Midland, TX, Brandon, FL, and Tulsa, OK, all suddenly closed their doors, with Walmart corporate announcing that some of those outlets would be shuttered for six months or more. We now know, even though Snopes has not updated its web page, that at least one of those Walmarts is a detention center to house children of immigrant families.

U.S. Senator Jeff Merkley (D-OR) attempted to enter the converted Walmart in Brownsville, TX to inspect the living conditions of immigrant children who had reportedly been separated from their parents and were rumored to be kept in cages and concrete floors of the converted Walmart. Merkley streamed live on social media his attempt to enter the facility but was denied entry by Homeland Security.

All the windows and doors to the facility—which is a shuttered Walmart—have been blacked out with window tinting. Merkley arrived and was immediately asked to leave by a female government worker.

One of the country’s most powerful lawmakers then demanded to speak with a supervisor. Instead of complying with his wishes in the name of transparency, the shadowy government workers called Brownsville police on the U.S. Senator. After 10 minutes of waiting and being confronted by local police, he was denied entry and forced to leave.

I was barred entry. Asked repeatedly to speak to a supervisor—he finally came out and said he can’t tell us anything. Police were called on us.

Children should never be ripped from their families & held in secretive detention centers. RT if you agree this is WRONG. pic.twitter.com/GVCuXNjR8d

When an organization has something to hide, not allowing members of congress to see it, in a democracy, is completely unacceptable…What’s going on is an effort to prevent the press from being able to report to the American people what is happening. And that’s simply unacceptable.

Later on in the video he added:

So far, as far as we know, no member of Congress has actually been allowed to see what’s going on with this program.

The detention facility is run by Southwest Key Programs, who promptly issued an apology to the Senator from Oregon on Wednesday for disallowing Merkley entry to its converted Walmart on Padre Island Highway in Brownsville. The statement reads:

We regret having to turn away Senator Merkley at our Casa Padre shelter. The U.S. Office of Refugee Resettlement (ORR) prohibits any facility from allowing visits that have not been approved by them, even if it is a U.S. Senator. With ORR approval, Southwest Key shelters have welcomed elected and other public officials at our facilities in the past, and will continue to do so, because we are proud of the caring environment we provide these children. We have reached out to the Senator and connected with his staff because we would like to see this happen.

After the video began gaining traction, the White House lashed out at the senator, claiming that he is “spreading blatant lies” about the reality of the situation.

“He voted against closing the ‘catch-and-release’ loopholes used by child smugglers, and his reckless open borders policies are responsible for the permanent separation of thousands of American families who have been forced to bury their loved ones,” Gidley added. “No one is taking a public safety lecture from Sen. Merkley, whose own policies endanger children, empower human smugglers and drug cartels, and allow violent criminal aliens to flood into American communities.”

“At 2pm on a Friday, the Senator asked to visit a secure DHS facility over the weekend where children are present and we worked with him to provide him access,” Houlton said. “This presented obvious and serious privacy concerns – not to mention disrupting operations. He was able to visit the facility on Sunday.”

According to Merkley, however, he says that he’s actually been inside another one of these facilities in which he witnessed hundreds of children being kept inside cages.

“When I was at the center at McAllen Border Station, this is the processing center, earlier and I was admitted there and I did see the people, hundreds of children locked up in cages there at that facility,” Merkley said in an interview with CNN. “They have big cages made out of fencing and then wire and nets stretched across the top of them so people can’t climb out of them.”

After the White House issued the statement on Merkley allegedly spreading lies, Merkley Communications Director Ray Zaccaro fired back and insisted the White House be more transparent on what’s going on with these children.

“The White House is smearing Senator Merkley because they can’t defend their indefensible policy of snatching children from their parents,” Zaccaro said. “Senator Merkley and his staff saw children in cages yesterday at the DHS processing center. We still have no idea what’s happening in the detention center where reportedly up to a thousand children are being held, since they refused the Senator’s request to go inside.”

Even if Merkley is doing all this as a means to smear Trump or garner political support, the reality of the situation is that children have been documented by politicians and local news crews during the Obama administration being kept in cages.

Sadly, these children are being used as pawns in a political game as rivals bicker over how to handle them while ignoring real factors that would curb criminal immigration.

As the Free Thought Project reported, Ron Paul provides penetrating wisdom on truly effective ways to deal with the situation, while providing a financial benefit and removing a giant injustice being perpetrated by the U.S. government.

End the war on drugs.

From the Ron Paul Institute:

“Likewise, the 40 year war on drugs has produced no benefit to the American people at a great cost. It is estimated that since President Nixon declared a war on drugs, the US has spent more than a trillion dollars to fight what is a losing battle. That is because just as with the welfare magnet, there is an enormous incentive to smuggle drugs into the United States.

We already know the effect that ending the war on drugs has on illegal smuggling: as more and more US states decriminalize marijuana for medical and recreational uses, marijuana smuggling from Mexico to the US has dropped by 50 percent from 2010.”

This view is backed by data from the U.S. Sentencing Commission. In fiscal year 2015, illegal immigrants were responsible for 75 percent of federal drug possession charges.

Amusingly, both Sean Hannity and PolitiFact confirmed this. Data show that the ‘illegal alien” category accounted for “1,640 of 2,181 total convictions (75 percent) in which the primary charge was simple drug possession.”

It is important to note that a rise in gang violence in El Salvador, Honduras and Guatemala has caused a massive influx of immigrants seeking refuge lately. They are coming in by the thousands in an attempt to escape this violence. Instead of looking at the cause of this violence, however, US policy is to separate immigrant children from their parents while prosecuting the adults—and this is supposed to somehow be a solution.

Paul also points out the burden of free medical benefits, food assistance, and education given to illegal immigrants which amounts to about $100 billion a year. Granted, many of them are part of the workforce in sectors such as agriculture, but not paying taxes and sending money back to Mexico creates a significant imbalance.

Instead of wearing the badge of the “largest prison population in the world” and continue to convert Walmarts into detention centers, the United States could begin eliminating the national debt, reduce crime, foster personal liberty, and drastically decrease criminal gangs that flourish from prohibition—and all it would have to do would be end the war on drugs.

Sadly, at least for now, it appears that these dinosaurs in DC think that caging children, ripping them out of their parents arms, and repeatedly deporting them at the expense of the taxpayer, is the only solution. Thanks government.