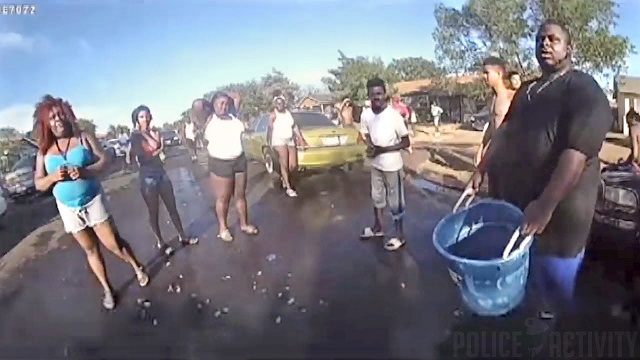 A female police officer was filmed politely trying to prevent people from blocking traffic during an unruly “neighborhood water gun fight” in Lubbock, Texas on Saturday.

The mob ignored her orders, sprayed her with water, ran from her after she tried to chase them down, then laughed at her after she face-planted due to slipping on wet mud and continued to spray her as she was getting up.

Video of the incident racked up over 6 million views on Facebook.

This woman was behaving exactly as BLM would say a “model police officer” should. This was her reward.

Officers were called to a neighborhood in the 2600 block of East Baylor in Lubbock for a civil disturbance. The event flyer says the event was called “East Side Water Wars: The Purge” and the battleground was in East Lubbock in the 79403 and 79404 zip codes. The event was to last from 1 p.m. until 10 p.m. The flyer said “any water weapon” was allowed.

Residents say the event has been in the works for months and it was meant to bring people of the East side together.

“It was just meant for a day to come out and have fun just throw water,” resident Donathon Miller said.

It worked. Hundreds of people from the neighborhood came together to have fun, but this event caused some problems.

The officers were called to the area after 31 complaints that people were throwing water balloons at vehicles on Parkway Dr. and blocking vehicles in the neighborhoods.

Residents say this is an event that was turned negative after the video of the incident went viral. The video sits at five million views and over 100,000 shares. They say the event was a positive thing for the community.

“We just were having fun, you usually get calls from people breaking into houses here on the east side,” Miller said. “That day our community was calm and we all came together to have fun, adults and kids.”

“What the water war did is that it brought a community that has suffered so many different losses, so many push backs, together. There was no bloods, no crips, there was no fighting, no shooting, none of those incidents happened. What happened was we came together and had a great time.”

They sure had a good time watching her fall on her face!

It’s a sight to behold watching how the fake news reported on the incident:

The scene was reminiscent of another block party last May where an elderly woman was slammed to the ground and then thrown into a pool along with her dogs after she politely asked a mob of party-goers in South Florida to lower their music.