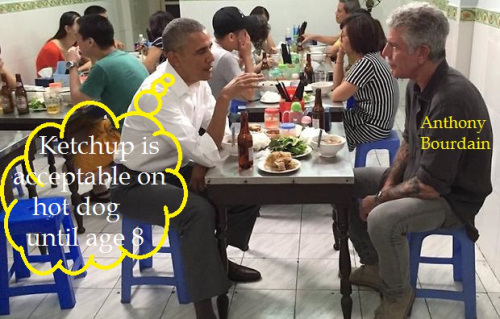 Pedophiles communicate with each other in code, to avoid being detected and apprehended.

This is on the authority of none other than the FBI. The FBI publication of January 31, 2007, (U) Symbols and Logos Used by Pedophiles to Identify Sexual Preferences, states:

An undercover sting in 2013 in Mobile, Alabama, also provided a window into the secret world of coded language pedophiles use online. As an example, PTHC stands for “pre-teen hardcore”. (The Daily Dot)

Anthony Bourdain is a “celebrity” chef who has a show on Food Network called No Reservations that features celebrity guest stars.

“While in Hanoi, Vietnam, Tony [Bourdain] scored a sit-down, one-on-one date with President Barack Obama at an actual populated restaurant. Boy, off-camera secret service aside, it would it have been a lark to sit at that table.

During the meal, the two discuss the promo-worthy subject of ‘noodle-slurping’, fatherhood, and the nation of Vietnam, which was a surreal experience for Bourdain. He claims he hadn’t felt that nervous before a guest turned up since Iggy Pop.”

Oddly, the video on the SBS page about Bourdain and Obama is “unavailable”. Some enterprising netizen, however, found it on YouTube.

The video shows Obama and Bourdain seated in a Vietnamese noodle-shop. The two men first make a toast with bottles of beer. Obama says that as President, he rarely is able to sit in a restaurant with other patrons. Then the waitress brings their food. Bourdain tells Obama that according to Vietnamese etiquette, it is appropriate to slurp the noodles. Bourdain lauds Obama on his skill with chop sticks. Obama describes a favorite outdoors restaurant in Indonesia which overlooks tea fields. A river runs through the restaurant, and diners can pick the fish they want from the river and the restaurant would catch and fry the fish, and serve the fish with rice.

At this point, Bourdain says something completely non sequitur. He asks Obama (3:10 mark):

“Is ketchup on a hot dog ever acceptable?”

“No, that’s one of those things like, well, let me put it this way, it’s not acceptable past age 8.“

According to The Daily Sheeple and others on the Alt-Media, in pedophile-speak, “pizza” refers to a young girl, while “hotdog” refers to a young boy. Urban Dictionary says “ketchup” is a euphemism for the illegal psychoactive drug ecstasy or MDMA.

And so, one interpretation of Bourdain’s non sequitur question and Obama’s cryptic reply is that they’re really referring to whether it’s acceptable to give mind-altering drugs to young boys. Unless there is another explanation for why the President of the United States of America would talk about the acceptability of putting ketchup on a hotdog, and specifying age 8 as the limit.