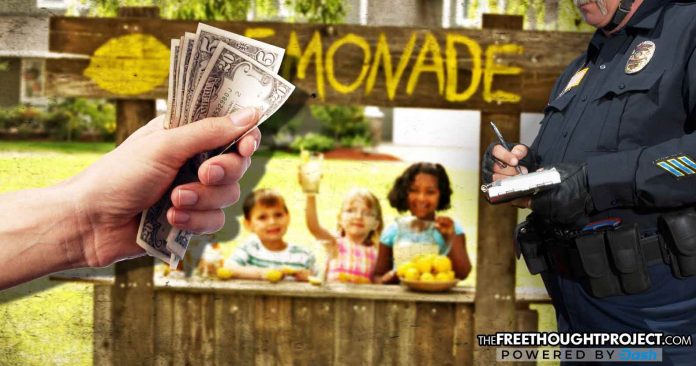 As summer arrives and children across the United States gather supplies to set up lemonade stands in their front yards, a popular lemonade company has launched a campaign pledging to pay fines and permit fees for young entrepreneurs who are reprimanded by the police state for their harmless refreshment stands.

Country Time launched a new campaign on Thursday, titled “#SaveLemonadeStands,” in which it acknowledged that “kids across the country are getting busted for operating lemonade stands without a permit.”

The company is responding by promising to pay fines and permit fees for the children who find themselves indebted to the state for the crime of attempting to make a few extra dollars by selling their homemade lemonade. It has launched the website, “Country Time Legal-Ade,” for submissions from children who have been wronged by the police state.

“All around the country, kids are getting busted for running their lemonade stands. Crazy, right? Why would anyone stop kids who are trying to build strong work habits, have fun and become young entrepreneurs? The reality is, they are being shut down because of old, arcane and very real permit laws. Look it up—it REALLY happens,” Country Time said in a press release for the campaign.

The company is right. Every summer there are disturbing stories of children who were extorted by police officers who apparently have nothing better to do with this taxpayer-funded time—such as solving real crimes with actual victims.

Last month, two young boys in Denver, Colorado, were traumatized and left in tears after police shut down their lemonade stand because they did not have the right permits. Their mother, Jennifer Knowles, said she was horrified when an officer confronted them and demanded that they shut down the stand immediately.

“The police officers came over and they said that because my boys and I did not have permits for a lemonade stand they shut us down and we had to stop immediately,” Knowles said. “My boys were crushed. They were devastated. And I can’t believe that happened. I remember as a child I always had lemonade stands and never had to worry about being shut down by the police officers. I mean that’s unheard of.”

In November 2017, a 5-year-old girl in Porterville, California, was slapped with a $59 fine for her illegal lemonade stand. Her parents presented the idea of the stand as a way for her to earn money for the brand new bicycle she wanted, and she closed the stand after she earned the $82 needed for the bike. Her mother proudly posted about her daughter’s accomplishment on Facebook, and one week later, she received a threatening letter in the mail demanding that she pay the fine for a lemonade stand permit.

In September 2016, a young girl in Fountain Valley, California, was reprimanded by police who claimed she was running a lemonade stand illegally and needed a $200 permit. However, in order to obtain that permit, the girl would have had to meet a host of government requirements, which would have cost her $3,500—astronomically more than she could have made in proceeds from her small lemonade stand.

In June 2015, two young sisters in Tyler, Texas, were threatened by police and forced to shut down their lemonade stand if they did not obtain a $150 permit. They originally opened the stand with the help of their mother, with the purpose of earning money to buy their father a present for Father’s Day.

A lemonade stand serves as the perfect way for children to learn how to invest their time and energy in creating a product and selling it to the public. Whether they are raising money for a present for someone else or for a new bicycle for themselves, they are learning valuable life lessons at a young age. If a patron is concerned that the lemonade being served at the stand is not “up to code,” then they don’t have to buy it, and they can easily donate a few dollars to the cause instead.

Country Time’s Legal-Ade campaign is serving as a reminder that the private sector can fight back against draconian laws in a clever way that exposes the tyrannical police state. It is about time to start raising awareness about the ridiculous phenomenon that has exploded in recent years and to start calling out the police officers who are wasting their time shutting down “illegal” lemonade stands as if they are actually serving the public or making a positive difference in the community.