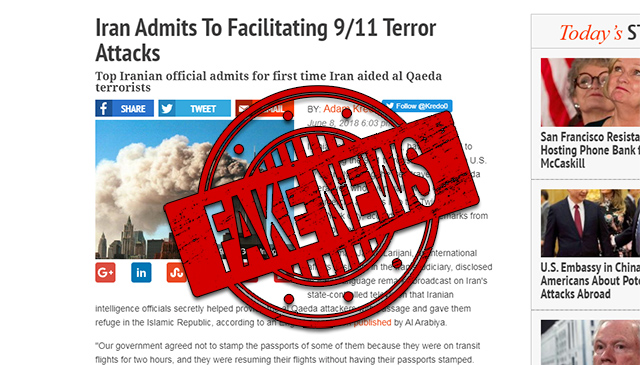 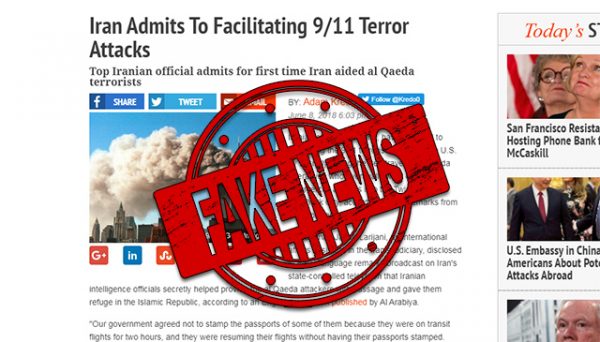 They did nothing of the sort.

Mohammad-Javad Larijani, who is described as an international affairs assistant in the Iran’s judiciary, paraphrased what was written in the 9/11 commission report about Iran’s involvement in the 9/11 attacks on Iranian TV and the Free Beacon and others chopped off the beginning of his comments to make it seem like he was admitting to the claims made in the report.

Fortunately, the source for the claim, Al Arabiya, actually included the beginning of Larijani’s comment so we can see how he was taken completely out of context.

An official has narrated the details of the #Iran|ian regime’s relations with #alQaeda. https://t.co/fHfzuck4hT pic.twitter.com/SVR4e4lIsW

According to Al Arabiya’s own translation, Larijani said:

“The lengthy report of the 9/11 commission which was headed by figures like Lee Hamilton and others mentioned in pages 240 and 241, i.e. in two or three pages, queries Iran’s role in the issue (and said that) a group of reports stated that al-Qaeda members who wanted to go to Saudi Arabia and other countries like Afghanistan or others and who entered Iranian territories by land or by air asked the Iranian authorities not to stamp their passports (and told them) that if the Saudi government knows they’ve come to Iran, it will prosecute them.”

“Our government agreed not to stamp the passports of some of them because they were on transit flights for two hours, and they were resuming their flights without having their passports stamped. However their movements were under the complete supervision of the Iranian intelligence.”

“The Americans took that as evidence of Iranian cooperation with al-Qaeda,” Larijani goes on to say. “They also considered the plane that passed through Iranian airspace, which carried one of the pilots that carried out the attack as well as a Hezbollah military commander as evidence of direct cooperation with al-Qaeda through Lebanon’s Hezbollah.”

Larijani was paraphrasing the report, not “admitting Iran facilitated the attack” as the Free Beacon and other neocon outlets have claimed.

The Washington Free Beacon is run by neocon Bill Kristol’s son-in-law Matthew Continettiand has been financed by pro-Israel billionaire and Republican mega-donor Paul Singer. The Free Beacon is best known for hiring Fusion GPS to take down candidate Donald Trump during the 2016 election. Saudi Arabia’s state propaganda mill Al Arabiya initially produced this report and blatantly misreported Larijani’s comments as an admission of guilt, but were evidently too stupid to realize their own report could be easily debunked by merely reading the first part of Larijani’s comments.

The Free Beacon, Breitbart, The Daily Caller and The Daily Wire helped them out by all cutting out Larijani’s initial comments which made it clear that he’s paraphrasing the 9/11 commission’s report.

Here’s how Free Beacon’s Adam Kredo reported the story (most of the other outlets copied his report):

Iranian officials, in a first, have admitted to facilitating the 9/11 terrorist attacks in the U.S. by secretly aiding the free travel of al Qaeda operatives who eventually went on to fly commercial airliners into the Twin Towers in New York City, according to new remarks from a senior Iranian official.

Mohammad-Javad Larijani, an international affairs assistant in the Iran’s judiciary, disclosed in Farsi-language remarks broadcast on Iran’s state-controlled television that Iranian intelligence officials secretly helped provide the al Qaeda attackers with passage and gave them refuge in the Islamic Republic, according to an English translation published by Al Arabiya.

“Our government agreed not to stamp the passports of some of them because they were on transit flights for two hours, and they were resuming their flights without having their passports stamped. However their movements were under the complete supervision of the Iranian intelligence,” Larijani was quoted as saying.

The remarks represent the first time senior Iranian officials have publicly admitted to aiding al Qaeda and playing a direct role in facilitating the 9/11 attacks.

The U.S. government has long accused Iran of playing a role in the attacks and even fined the Islamic Republic billions as a result. The U.S. 9/11 Commission assembled to investigate the attacks concluded that Iran played a role in facilitating the al Qaeda terrorists.

Larijani admitted that Iranian officials did not stamp the passports of the al Qaeda militants in order to obfuscate their movements and prevent detection by foreign governments. Al Qaeda operative also were given safe refuge in Iran.

“The Americans took this as evidence of Iran’s cooperation with al-Qaeda and viewed the passage of an airplane through Iran’s airspace, which had one of the pilots who carried out the attacks and a Hezbollah military leader sitting [next to] him on board, as evidence of direct cooperation with al-Qaeda through the Lebanese Hezbollah,” Larijani was quoted as saying in the May 30 interview, which is gaining traction on social media.

The U.S. government has not formally commented on the interview, but did highlight it in an official tweet from the State Department’s Arabic-only Twitter page.

Note, that’s the entire article and there is no mention of Larijani’s initial comments making it clear he was paraphrasing from the 911 commission report.

This story is getting massive traction despite being verifiably false and may be used as an excuse to worsen US relations with Iran, or worse, as a pretext for war:

Iranian officials, in a first, have admitted to facilitating the 9/11 terrorist attacks in the U.S. by secretly aiding the free travel of al Qaeda operatives who eventually went on to fly commercial airliners into the Twin Towers in New York City. https://t.co/sQZKWF2oED

There is no solid evidence Iran facilitated the 911 attacks, though there is plenty implicating Saudi Arabia.

The so-called “fact-checkers” in the “liberal” media are all asleep at the wheel — just as they were with the alleged chemical attack in Syria — and have so far completely ignored this fake news report.

America Mourns The Slaughter Of Twenty-One Innocents, While Inconsiderate Make It Political
The Lid