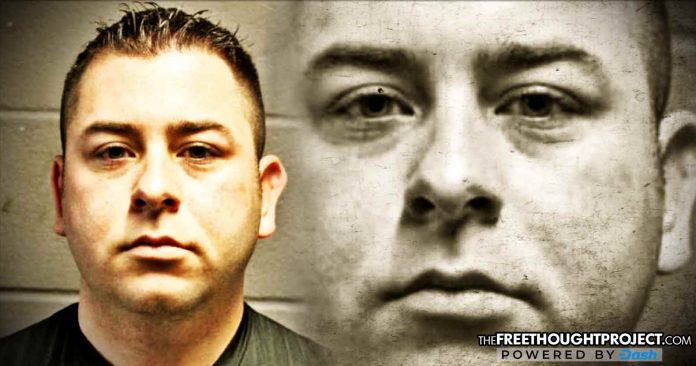 Harris County, TX — A Harris County Sheriff’s deputy, who was fired after the department found he’d produced and starred in a video where he was having sex with a dog, has been sentenced to 27 years in prison. The cop, Andrew C. Sustaita Jr., 31, was not sentenced to prison for having sex with a dog. Instead, he’s been remanded to Texas’ penal system because he was found to have been in possession of child pornography.

As TFTP reported last year, Sustaita’s bestiality made national headlines but once investigators secured search warrants for his computer, some 200 videos and images of child pornography were discovered, some involving a family member’s daughter.

According to the Houston Chronicle, U.S. District Judge Sim Lake handed down Sustaita’s lengthy 27-year prison sentence. In addition to his time spent in prison, Lake also ordered Sustaita to a lifetime of supervised release as a registered sex offender. The judge also ordered Sustaita to have no contact with children without the express permission of a probation officer.

For the monster that is before us today, the cost of your crime cannot even begin to be computed as its effects may be compounded throughout the entire life of my baby…Who knows how much counseling she will need? Who knows how her future relationships will be effected? Who knows what my baby thinks when looking at an officer of the law or a man or a family member.

Judge Lake was apparently equally disturbed as he described his feelings having to preside over the former law enforcement officer’s case.

This was not an easy case, in fact, it’s one of the most disagreeable cases I’ve ever presided over.

Sustaita, whose father is a veteran investigator with the Harris County Sheriff’s Department, was found to be in possession of a photo showing genitals identified as Sustaita’s placed on the head 10-year-old girl, a daughter of the deputy’s relative. He also pulled down her underwear to expose her genitals, filmed them, and supposedly uploaded the photos to the internet where they will be distributed for years to come.

According to the Maven:

The disturbing case of bestiality led investigators to dig deeper into the officer’s life which revealed the officer’s participation in pedophilia, and child pornography. There are reportedly dozens of victims. Sustaita Jr. was a 6-year veteran of the Harris County Sheriff’s Department. He now says he fears for his life in prison and for what may happen to him. He told Judge Lake:

Your honor, I’m scared to death of what’s going to happen,” said Sustaita.

Indeed, he should be.