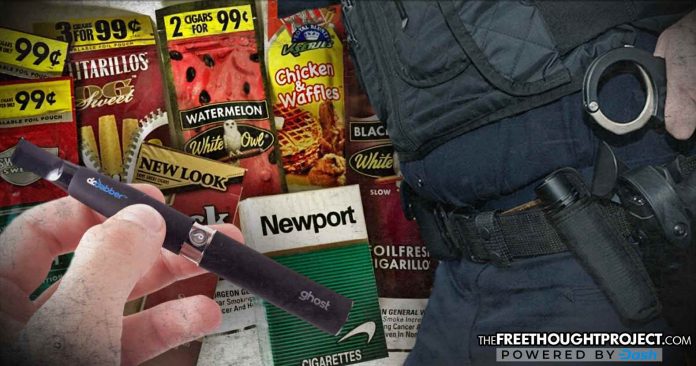 As the entire state of California has recently taken a step forward in the drug war by legalizing cannabis, the city of San Francisco has taken a step back by passing a ban on E-cig liquid and menthol cigarettes. The law had been pending since last summer, due to challenges from a coalition of businesses including tobacco giant R.J. Reynolds, the producer of Newport, the most popular menthol cigarette.

Surprisingly, the ban was supported by nearly 70 percent of the city’s voters.

“San Francisco’s groundbreaking law stands—and will stop the tobacco industry from targeting kids, African Americans and other populations with menthol- and candy-flavored products, as the industry has done for far too long. The San Francisco vote gives a powerful boost to growing efforts around the country to end the sale of flavored tobacco products,” Campaign for Tobacco-Free Kids President Matthew Myers said in a statement.

E-cig liquid has been targeted for the ban because critics say that it is marketed to children because it is colorful and flavorful. However, children are not the only human beings on the planet who like to add flavor to something that they are enjoying. Lawmakers point to the fact that E-cigs have become especially popular among young people, but tobacco products have always been popular among teens—this is not a new or recent phenomenon.

Some lawmakers are even calling for a federal ban on these substances, and back in March, the FDA announced that it will consider such a policy. FDA Commissioner Scott Gottlieb made a statement at the time, appealing to the danger of E-cigs to children.

“No child should use any tobacco products, including e-cigarette. At the same time, we’re aware that certain flavors may help currently addicted adult smokers switch to potentially less harmful forms of nicotine-containing tobacco products. The thought of any child starting down a path of a lifelong addiction to tobacco, which could ultimately lead to their death, is unacceptable. We need to take every effort to prevent kids from getting hooked on nicotine,” Gottlieb said.

According to CNBC, Wells Fargo analyst Bonnie Herzog wrote in a note to her clients last week that a federal ban on menthol cigarettes is “extremely unlikely,” but this isolated law could cause turmoil for tobacco stocks. Herzog pointed out that menthol represents roughly 35 percent of the entire tobacco industry’s sales.

While a full-on federal ban may not be likely, many other regions may follow suit with similar bans, especially in neighboring California cities. Oakland, which is just across the bridge from San Francisco, approved a similar ban in September, and it is scheduled to take effect later this year. On the east coast, lawmakers in New Jersey are also seeking to ban menthol cigarettes.

It is important to have discussions about which drugs are dangerous and should be avoided, but they are not discussions to be had in the halls of Congress. The health effects of tobacco products should be known by everyone, and since it is something that is unhealthy, its use should be discouraged—but not through the force of law.

It is also important to mention that these laws will do nothing to steer children away from lives of addiction. These products will be just as readily available on the black market as they are today on the legal market, but unfortunately, a new class of nonviolent criminals will be created, and police will have another excuse to fine people and lock them in cages.