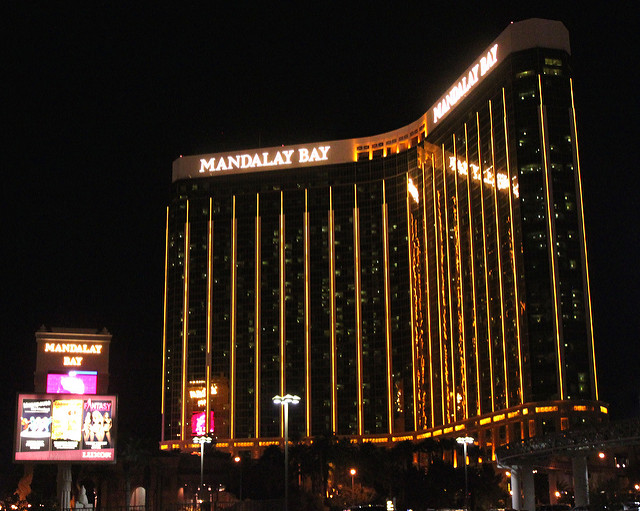 LAS VEGAS (INTELLIHUB) — Intellihub editor-in-chief Shepard Ambellas tediously went through 518 different 9-1-1 calls from the night of the 1 October massacre in which the online sleuth located a cornucopia of information which further paints a picture of how Las Vegas Metropolitan Police Department Sheriff Joseph Lombardo lied to the general public about events which occurred on the night of the shooting.

However, it’s also important to point out that the sheriff did not lie by choice but rather lied due to the fact that the Department of Homeland Security deemed the terror attack a ‘matter of national security’ just one day after the shooting which is why FBI Special Agent Aaron Rouse was subsequently assigned to Lombardo as his handler.

The following calls to 911 took place between the hours of 10:00 pm and 11:59 pm on October 1, 2017, and absolutely eviscerate LVMPD’s narrative of a single lone wolf shooter.

You can read over 250 other detailed reports on the Las Vegas Shooting here.

When a 911 operator asked the caller if she saw the shooter, the woman who was inside the Route 91 venue at the time replied: “I think we saw the guy flying in a helicopter. […] You guys need officers in the sky because he’s flying in a helicopter.” (Keep in mind the LVMPD helicopter did not show up anywhere near the vicinity until 10:25 pm) You can learn more about the helicopters here.

A LVMPD 911 call operator who was taking real-time caller info in the background can be heard saying: “We have three shooters on the 32nd-floor of the Mandalay Bay.”

911 operator: “There was a shooter at the Route 91 and all that we know is that the suspects are still outstanding and there were three of them.”

Caller inside Hooters hotel room #340: “They are saying there’s a shooter in the lobby of the casino.”

A man who got a call from one of his employees saying that she was ‘trapped in an airport hanger’ relayed the information to a 911 operator.

“Two [middle-eastern] gentlemen with backpacks and a bullet proof vest walking calmly into the hotel while everybody is running the other way, and they got people who were shot in the restaurant in front of it. I think that’s some of the shooters. It’s behind the Hooters. It’s America’s Best Value — it’s a little motel,” a man told 911.

Off duty Orange County Sheriff calls 911 to report: “First floor parking, MGM, suspicious people. I don’t know, they are on their phones, middle-eastern, first floor, MGM parking lot. […] they were surrounding a vehicle […] it was just a weird look.”

911 operator: “As far as we know there are three suspects.”

Las Vegas Monorail Control tells 911 operator: “We have two passengers that are on the monorail platform who have gunshot wounds to their leg.”

Caller tells 911 operator: “We are stuck in the New York New York we don’t know if it’s safe to leave — we saw bodies on the floor in the Zumanity theater.”

Caller tells 911 operator: “Yes, metro, this is in reference to your active shooter — my niece [is] saying there is an active shooter now inside the Tropicana […].”

Caller tells 911 operator: “We are in the Bellagio and we heard gunshots and we don’t know what to do. […] Maybe like five to ten minutes ago. […] A bunch of people ran from outside the casino inside.”

Caller to 911 operator: “The shooter was in front of Planet Hollywood.”

Woman reports to 911 that there was a shooter inside the Paris casino and that multiple shots were fired.

A hotel guest staying on the 21st-floor at Mandalay Bay told a 911 operator that he heard “what sounded like an explosion” around 11:30 pm just before “glass” fell down past his exterior hotel room window.

Metro: “We are getting reports of an active shooter at the Vanetian.”

A woman who called 911 told the operator that her sister was in the food court at the Excalibur when a gunman came in and open fired.

Caller tell 911 operator: “There is an active shooting at the Paris casino […] we heard the shots […] maybe 30-45 seconds ago.” (The caller maintained that he continued to hear gunshots while on the phone with 911)

911 operator taking a report: “The shooter was at the Chandelier bar in the Cosmo and we have another one down in the valet of the Bellagio.”

“There’s people with guns over there at the High Roller. […] there’s a lot of people already killed in there.”

Caller to 911 operator: “So there is this active shooting guy at the Mirage.” (Caller references a male shooter inside of the Mirage.

A man staying at MGM Grand on the 38th-floor in tower number two room 37-716 reports hearing a lot of gunfire in the building within the past 2-3 minutes.

A man named Chris told a 911 operator that he sees a man dressed in black on the lower roof of the Mandalay Bay by a skylight.

911 caller reports that a lot of shots were fired in Caesar’s Palace around 11:33 pm.

“One woman even got shot,” he explained.

Caller to 911 operator: “We’re in the Bellagio, we can hear them shooting.”

Caller tells 911 operator: “I’m in the Linq hotel and there’s and active shooter. […] he came in the front entrance […] strip side.”

Caller to 911 operator: “They are shooting at the Flamingo […] they are still shooting now.”

It appears that there are a number of missing 911 calls between the hours of 11:15 pm and 11:29:59, as the YouTube channel Mr. Burgundy points out in the following video: