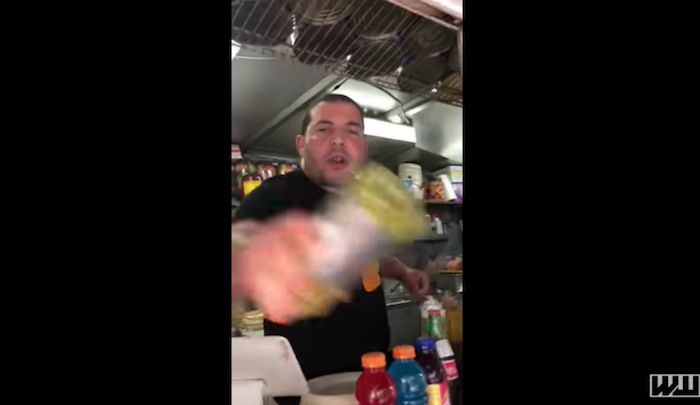 This didn’t make the news. But why not? If the food truck worker had been anyone else but a Muslim, you can be sure that this racial incident would have made international headlines. Islam El Masry was arrested. That’s good. But did he lose his job, his truck, his city license? If not, why not? It is abundantly clear that the enemedia silence on this incident is due entirely to his being a Muslim. Otherwise a black woman being abused in this way would have been front-page news. But there are no lengths to which the mainstream media will not go in order to present Muslims in a favorable light, and no story they will not ignore.

“Food Truck Worker Hurls Bottle, Racial Epithet at Black Woman After She Tries to Pay With Change: Report,” by Angela Helm, The Root, June 7, 2018 (thanks to RN):

…A black woman in Oregon was allegedly called out of her name and assaulted by a food truck owner, all because she tried to pay for her food with change.

According to Willamette Week, Carlotta Washington says she was called a “nigger” by Islam El Masry after she tried to pay for her lunch with quarters (not pennies, mind you).

In a short video provided to the outlet by a bystander, El Masry can be seen telling Washington to “get the fuck out from here” and calling her a “stupid bitch” after throwing a Gatorade bottle at her for confronting him.

In a portion not captured on video, Washington says, El Masry sprayed her with Sriracha, which was confirmed to the news outlet by witness Rachel Good, who said that she found Washington’s shirt, face and shoulders covered with the Thai hot sauce.

“It was in my eyes and all on my skin. It was burning terribly,” Washington says.

After Washington asked that police be called, El Masry was booked into Multnomah County jail on charges of misdemeanor harassment and assault. Bail is set at $4,000.