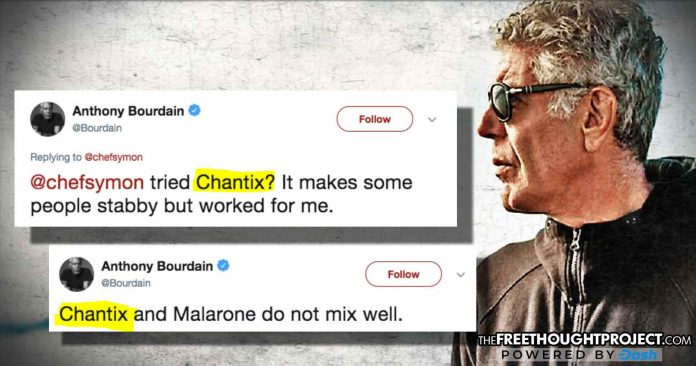 Celebrity Chef and TV Personality Anthony Bourdain took his own life on Friday, and as his friends, family and the public are left with endless questions, evidence has surfaced showing that Bourdain was using the drug Chantix, which has been linked to hundreds of suicides.

Bourdain was vocal about his attempt to quit smoking by using the popular anti-smoking drug Chantix. In February 2012, Chef Michael Symon shared on Twitter that he “had a little smoking hiccup the other day… moment of weakness… but unlike other attempts to quit, got right back on track,” and Bourdain replied, “tried Chantix? It makes some people stabby but worked for me.” The claim that Chantix “makes some people stabby” is an understatement, considering the fact that the drug comes with a long list of side effects, including hallucination, mood changes, aggressive behavior, thoughts of hurting or killing others, and suicidal thoughts or actions.

While Chantix may help some people stop smoking, the negative impact it can have on every other aspect of a person’s life raises questions about whether it is worth it. When Bourdain was asked in April 2012 if he really did quit smoking, he replied, “I really did quit smoking and it has in no way improved my life—or my palate, unfortunately.”

However, Bourdain was still taking the drug in November 2012, and he found that the side effects became even worse when mixed with the anti-malaria drug, Malarone. He wrote on Twitter, “Chantix and Malarone do not mix well.”

While it is unclear how long Bourdain continued to take Chantix, the fact is that he introduced a powerful drug into his system that has been shown to have an overwhelming number of dangerous side effects. In fact, as Medical Daily reported, Institute for Safe Medical Practice senior researcher Thomas J. Moore concluded that Chantix was “associated with more adverse effects than any other medication on the market” in 2008.

After approving the drug in 2006, the Food and Drug Administration was forced to place a “black box warning” on Chantix in 2009, because of the overwhelming number of reports linking it to suicidal thoughts, hostility, and agitation.

Between 2008 and 2013, at least 544 suicides and 1,869 attempted suicides in the United States were connected to Chantix, according to documents obtained through the Freedom of Information Act and reported by Al-Jazeera.

In a 2010 study on the cases in which users reported increased violence or aggression after taking Chantix, Moore told Al-Jazeera that he found many of the examples started with acts of violence and then progressed to suicide attempts and that there were usually three common factors.

While it is not clear whether Bourdain showed signs of violence or aggression, his suicide appears to have been sudden and has shocked many. It is not known whether Bourdain was taking any pharmaceutical prescriptions at the time of his death, but actress Rose McGowen responded by speaking out about his battle with depression and his relationship with her close friend, Asia Argento, in a letter:

“When Anthony met Asia, it was instant chemistry. They laughed, they loved and he was her rock during the hardships of this last year. Anthony was open with his demons, he even wrote a book about them. In the beginning of their relationship, Anthony told a mutual friend, “He’s never met anyone who wanted to die more than him.” And through a lot of this last year, Asia did want the pain to stop. But here’s the thing, over their time together, thankfully, she did the work to get help, so she could stay alive and live another day for her and her children. Anthony’s depression didn’t let him, he put down his armor, and that was very much his choice. His decision, not hers. His depression won. Anthony and Asia had a free relationship, they loved without borders of traditional relationships, and they established the parameters of their relationship early on. Asia is a free bird, and so was Anthony. Was. Such a terrible word to write.”

Anthony Bourdain will be remembered as both a chef and a humanitarian who used his award-winning series, “Parts Unknown,” to break the barriers between cultures in the countries he visited.

From accusing the world of robbing the Palestinian people of “their basic humanity” after a trip to Gaza, to admitting that he was “really knocked sideways by how well we were treated” during a trip to Iran, to remarking that a trip to Cambodia would make anyone want “to beat Henry Kissinger to death with your bare hands,” Bourdain worked to humanize parts of the world that are typically demonized by the United States.

Frequently, I’ve come to regret things I’ve said. This, from 2001, is not one of those times: pic.twitter.com/1NiHlupJkL