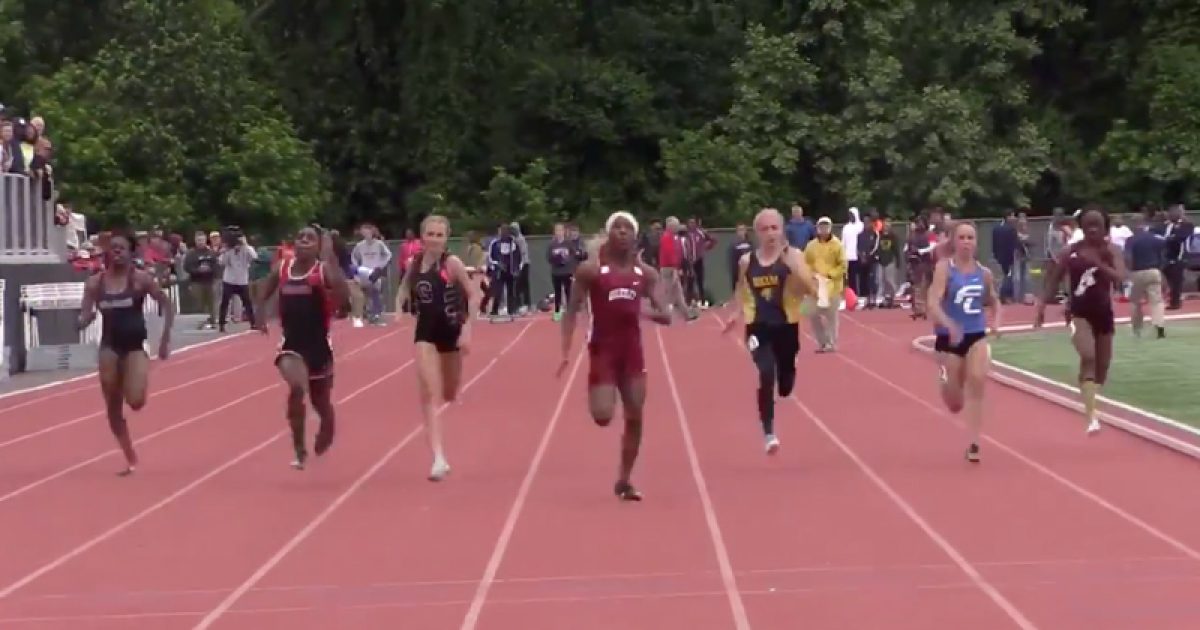 A couple of transgender high schoolers took first and second place finishes at a recent track event, leaving the girls in the dust and parents to wonder: Is this the new state of athletic competitions in the public school systems?

One of the transgender kids, a sophomore, even broke a school record for the 100-meter dash that had stood for years and years.

Not really a fair competition now, is it? But this is the far left’s vision for America — tear down tradition and common sense, one political platform, one special right, one eyebrow-raising policy at a time. It’s all in the name of diversity and equality, after all.

One of them, Bulkeley sophomore Terry Miller, broke records in both the 100 and 200-meter events, the latter spanning back to 1997.

Just last year during the winter indoor season, Miller had raced as a boy.

The victories have prompted a look at how gender affects sports in the state, where gender identity is recognized.

The Connecticut Post spoke to one of the losing female students, but she didn’t seem too upset she lost to biological males.

“To be honest, I think it’s great they get a chance to compete and as long as they’re happy, I guess, there’s not that much I can do,” said RHAM High School student Bridget Lalonde, who finished third place in the 100 meter race. “The rules are the rules. The only competition is the clock. You can only run as fast as you can.”

Lalonde also came in second against Miller in the 200 meter race.

Miller attempted a sweep by winning the 400 meter race as well, but faltered and placed fourth.

The winner of the 400, Newton High School’s Carly Swierbut, told The Post she didn’t have a problem racing against transgender students.

Parents and coaches on the other hand are asking why the state’s athletic committee hasn’t worked to level the playing field.

Hillhouse High School coach Gary Moore said last week he didn’t think the rules were “fair to the girls,” and this week he questioned why other coaches weren’t raising the issue.

The parent of one of the girls who placed sixth in the 100 also called on the state to change their rules.

“Sports are set up for fairness. Biologically male and female are different,” said Bianca Stanescu.

“The great majority is being sacrificed for the minority.”

Despite leagues such as the NCAA having rules requiring transgender players undergo a year’s worth of hormone treatments, the Connecticut Intersscholastic Athletic Conference hasn’t budged claiming to do so would be discrimination.

“A lot of people have asked, can you run a separate race, can you put an asterisk next to their name, do something that shows there is a standard that is different from that?” CIAC executive director Karissa Niehoff told The Post. “When you get into that playing out, you have got civil rights issues.”

“Then within the same gender, you are taking one population of the gender and you’re separating them and creating another class. That’s what Title IX speaks to. That’s what Office of Civil Rights guidelines speak to. You cannot discriminate based on gender. And in our case in Connecticut, gender is gender identity.”

Of the girls who may feel angry, she added, “We do feel for them.”

“Fully agree it doesn’t feel good. The optic isn’t good. But we really do have to look at the bigger issues that speak to civil rights and the fact this is high school sports.”

For now, it doesn’t look like anything will be done, but The Post did indicate “there was talk among opponents of starting collective legal action.”