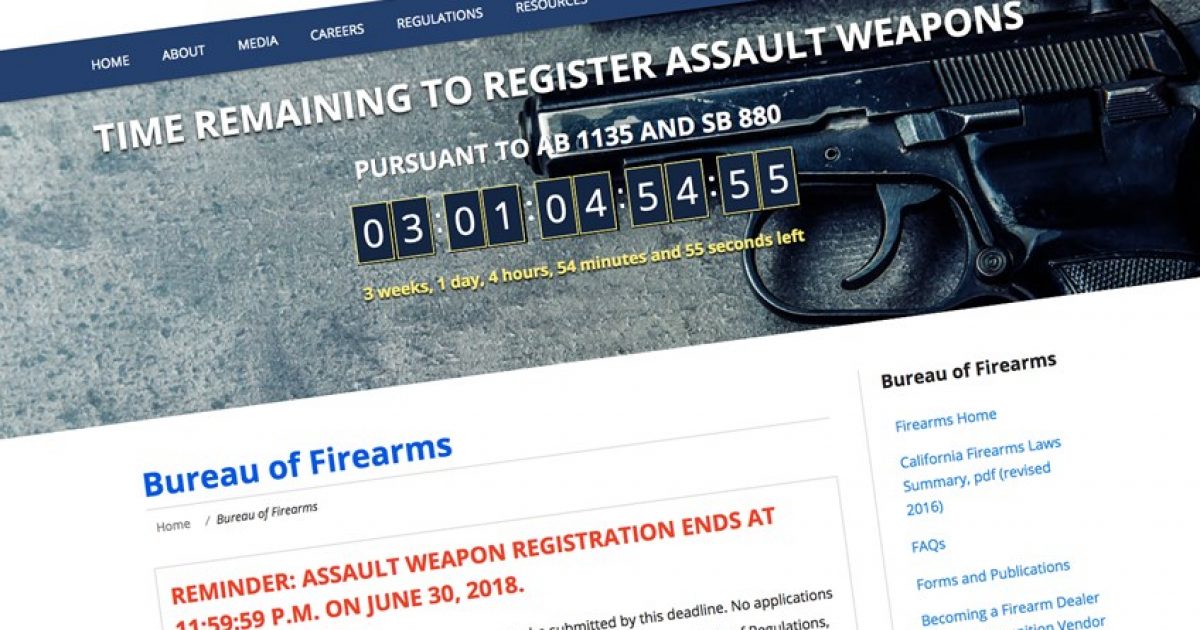 Californians are doing their best to comply with unconstitutional gun regulations that lead to gun confiscation in the Golden State, but in many instances, residents are discovering that even their good faith attempts to comply with the tyrannical laws are bringing them under the boot of the Department of In-Justice of California.

The latest story about a farmer who had his guns confiscated and is facing felony charges comes from local NBC affiliate KGET.

The DOJ allegedly began to investigate Kirschenmann when he submitted photos of what they claim was an illegally modified AR-15 style rifle.

Does “shall not be infringed” mean anything to these tyrants?

As a result, the DOJ raided his home in April.  Following the raid, the DOJ discovered a dozen guns, 230 rounds of ammunition and two silencers.  That’s not really a big deal, but he’s in Communist California.

The NRA-ILA chimed in on what took place.

Kirschenmann was arraigned on May 21 and given $150,000 bail. The farmer faces nine felony counts of unlawful possession of an “assault weapon,” two counts of possessing a suppressor, and one charge of possessing a “multiburst trigger activator.” There is nothing in the report to indicate Kirschenmann violated any federal laws or that he has misused his firearms in any manner.

The California DOJ’s persecution of Kirschenmann, following what appears to have been an honest attempt to obtain assistance in complying with state law, will sow further mistrust between the state government and gun owners.

Retired KCSO Commander Joe Pilkington is a court recognized firearms expert. He could not speak directly to Kirschenmann’s case but says the laws are changing so frequently, it’s often hard to keep up with the latest regulations.

“Just in the last few years, there have been lots of changes in gun laws,” he said. “Making an effort, a good faith effort to comply with these really complicated laws, should count for something.”

A new state law requires assault-style weapons be registered by the end of June.

Pilkington recommends anyone who isn’t sure about the process go through a federally licensed firearms dealer.

“There is this self-registration application on the Department of Justice website, but it may be better to talk to an FFL. Someone who has a license, to talk through whatever these complications are.”

The NRA-ILA went on to add:

Many gun owners are already reluctant to comply with registration laws, as such schemes are quite accurately viewed as a means to facilitate firearms confiscation. Moreover, Kirschenmann isn’t alone in his alleged failure to conform to Sacramento’s mandates. As history shows, when faced with California’s increasingly onerous and byzantine gun laws, many decent folks have unwittingly broken the law, ignored new restrictions, or opted for civil disobedience.

In 1989 California passed legislation that categorized certain semi-automatic firearms as “assault weapons” and required them to be registered. Few complied. Following the deadline and a “second chance” grace period, the Los Angeles Times reported that 46,062 firearms had been registered. Revealing the scale of noncompliance, the report went on to note that “The state Department of Justice has estimated there are 200,000 to 300,000 [commonly-owned semi-autos in the state]. Others have calculated as many as 450,000 to 600,000.”

With woeful registration compliance rates, one might expect gun control’s true believers to show leniency to those who make an attempt to comply with the law. Of course, that notion assumes gun control advocates consider registration in itself to be a valuable public policy. In truth, anti-gun advocates value registration only so far as it creates an additional barrier to gun ownership and enables confiscation.

Understanding this, California’s gun control laws have worked precisely as intended in Kirschenmann’s case. California officials have utilized them to remove firearms from one more benign American citizen and in doing so have inched closer to their goal of total civilian disarmament.

This is exactly what the goal is:  total and complete gun confiscation of otherwise law-abiding citizens and before you say that the farmer or others were acting unlawfully, I have to ask you where in the US Constitution does it provide for legislation to infringe on the keeping and bearing of any arms that law-abiding citizens have?  Are not states who are a part of the Union agreeing that is a right to be protected?  So, where does California get off telling its citizens that they are criminals because of a type of weapons they have?

No, the real criminals in California are not the citizens, it’s their representatives and those in the office of the Department of Justice.