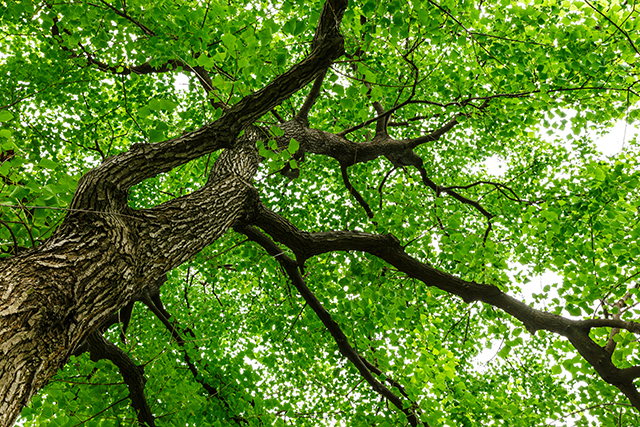 Harvey is apparently upset about the fact that the towering silver maple partially blocks sunlight from reaching his home, including the matrix of solar panels that sits atop his roof. So he took it upon himself to deal with the “problem,” even though the tree technically sits in his neighbor’s yard and not his own.

Neighbors reportedly captured video footage of Harvey snooping around his neighbor’s yard not long after purchasing, but not yet moving into, the home, which quickly alerted them to his distaste for the seven-story high life form. They’ve since caught him on tape actually trying to physically destroy it, which is when authorities intervened.

“He has outraged everyone in a half-mile radius,” one neighbor told local media.

On April 30 when a neighbor spotted Harvey in a mask and gloves trying to drill the tree to death, they immediately called the police. But Harvey fled the scene by the time they arrived, only to return later to continue where he left off.

In every instance, the owner of the tree wasn’t home, which is to be expected. But all of the video evidence was enough to indict Harvey and reveal what he was up to.

From the very start, Harvey tried to get his neighbor to agree to having the tree removed by claiming that it was dead, adding that he could help remove it. When the owner contacted her arborist to verify, learning that the tree was perfectly healthy, Harvey proceeded to have his own arborists come to chop away at the tree.

At the direction of Harvey, these arborists sawed off large limbs from the tree, which shocked many neighbor’s who had long been familiar with its presence. Further, it wasn’t Harvey’s tree to begin with, which gave him no right to modify it, even though it had been obstructing sunlight from his own property.

“The tree has a right to be and has a right to survive,” stated the tree’s owner, a retired city teacher, to the media. “Why would you have solar panels and try to take down a tree? That to me is the linchpin of everything. It says a lot.”

Well, one thing’s for sure: Roundup is a death sentence for healthy plants

Despite Harvey’s attempts to kill the tree with a deadly, disease-causing Monsanto weedkiller and puncture wounds, it remains alive. However, half of its leaves have turned brown, and neighbors, including the trees owner, say that it’s struggling to stay alive.

“The neighborhood is in mourning because of that tree suffering,” the tree’s owner added. “I bought that house because there was a full-blown beautiful tree in my yard. That just blew me over. Do you know what it’s going to be like not to see a bird up there in anymore? These are the pleasures of life.”

The owner has since had her attorney send a cease-and-desist letter to Harvey, barring him from entering the property or going anywhere near the tree. But the damage may already be done, though neighbors and others are hoping for a miracle.

“It’s really hard for me to follow what he’s thinking,” stated another neighbor. “It’s arrogance and a wrong sense of entitlement to come here and destroy his neighbor’s property.”

In responding to the incident, Bravo TV, the channel on which “Top Chef” airs, stated that Harvey has a “strong connection to his hometown of New York,” and that it’s “evident in everything he does.”