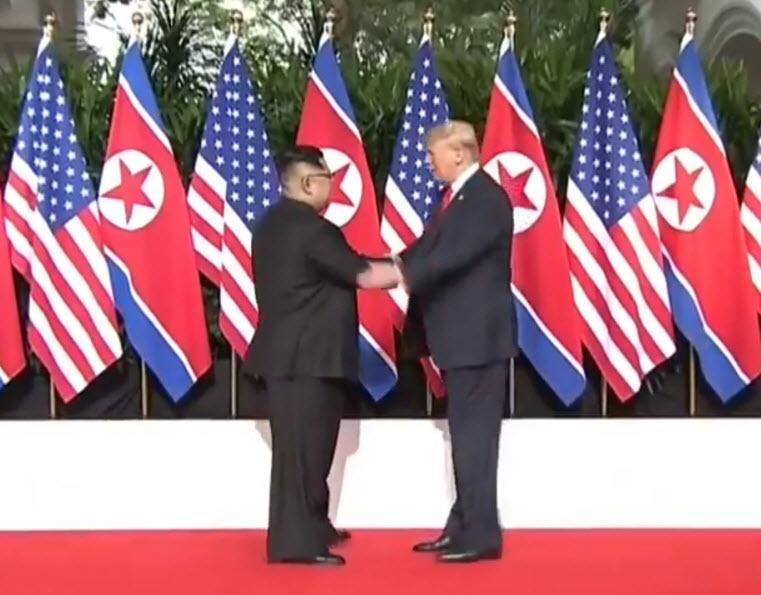 Donald Trump just did what no other president in U.S. history was able to do.  He actually sat down with the leader of North Korea, and at the conclusion of the approximately four hour summit meeting they both signed an agreement which calls for the United States to provide “security guarantees” to North Korea and which calls for the “complete denuclearization of the Korean Peninsula”.  It was a truly historic day and a truly historic outcome, and yet all the mainstream media in the United States could do was whine and complain.  Throughout their coverage, mainstream media reporters continually tried to put an anti-Trump spin on things.  They claimed that the agreement did not have the “specific wording” that experts were looking for, they pointed out that other agreements in the past have failed, and they continually insisted that the Trump administration was giving Kim Jong-Un too much respect.

Even when something positive was reported, it had to be immediately followed up with a downer.

For example, this is how a Reuters article on the summit began…

But a joint statement signed at the end of their historic summit in Singapore gave few details on how either goal would be achieved.

Of course there are more details to work out.  There always are, but why can’t we just be happy that the president of the United States and the leader of North Korea sat down together to talk peace for the first time ever?

At the start of the summit, the two leaders shook hands on a red carpet in front of the island resort hotel chosen for the meeting.

At one point, reporters overheard a translator, apparently interpreting Kim’s words, as saying that “many people in the world will think of this as a … form of fantasy … from a science fiction movie.”

If this process is ultimately successful, this is one of those iconic moments that will be remembered for decades.

(watch as he mouths the words "thank you very much" to the cameras) pic.twitter.com/tIaYOTL5Xh

So much is riding on these negotiations.  Should they fail, we could end up with a nuclear war in Asia.  It would be nice if the mainstream media would cut Trump a little slack on this one, but instead they repeatedly tried to pepper both leaders with unhelpful questions.

For instance, CNN’s Jim Acosta loudly fired off questions whenever he was in earshot of either Donald Trump or Kim Jong-Un.  At one point, Trump finally answered one of his questions…

He said he would “absolutely” extend an invitation to the White House to Kim, who also heralded a new era.

“Today, we had a historic meeting and decided to leave the past behind,” Kim said through a translator. “The world will see a major change.”

Later, during a solo news conference after the summit, Trump said he does indeed “trust” Kim.

Other reporters fixated on the fact that Kim Jong-Un is a really bad guy.

Yes, Kim Jong-Un has done some really horrible things.  But if he really wants to change and really wants a lasting peace, shouldn’t we make an effort?

Instead, the mainstream media kept hammering the Trump administration for showing any respect to Kim at all.  The following comes from USA Today…

Critics said all the pomp and ceremony — American and North Korean flags stood side-by-side to form the backdrops for many of the photo opps — lent too much prestige to Kim, a dictator who imprisons and murders his opponents, all while pursuing long-range nuclear weapons.

Why can’t the “critics” just be quiet for once?

Trump is trying to prevent a nuclear war, and it would be really nice if the entire country could get behind him on this one thing.

CBS News took things even farther.  They actually ran an entire article talking about how horrifying the cost would be if North Korea and South Korea were to reunify someday…

Analysts say unifying North and South Korea could cost a trillion dollars under the best of circumstances and take several decades. The final price tag would also depend largely on what the catalyst for reunification is.

Some analyses put the cost of reunification at far more — closer to $3 trillion. Experts argue that much of the cost surrounding any scenario for Korean unification would depend on whether the countries decided to converge gradually or if a chaotic event occurs. If the reform were carefully planned and followed by a peaceful union, it would be far less expensive than if North Korea’s economy collapsed or a war broke out, requiring massive reconstruction costs.

How about the cost of a nuclear war in Asia in which entire cities are flattened and millions upon millions of people end up dead?

Would that be preferable?

Thankfully, Trump is taking the high road on this one, and he posted a very inspirational video with footage of the summit on Twitter…

And for those that have not read it yet, the following is the complete joint statement that Donald Trump and Kim Jong-Un signed at the conclusion of the summit…

President Donald J. Trump of the United States of America and Chairman Kim Jong Un of the State Affairs Commission of the Democratic People’s Republic of Korea (DPRK) held a first, historic summit in Singapore on June 12, 2018.

President Trump and Chairman Kim Jong Un conducted a comprehensive, in-depth, and sincere exchange of opinions on the issues related to the establishment of new U.S.-DPRK relations and the building of a lasting and robust peace regime on the Korean Peninsula. President Trump committed to provide security guarantees to the DPRK, and Chairman Kim Jong Un reaffirmed his firm and unwavering commitment to complete denuclearization of the Korean Peninsula.

Convinced that the establishment of new U.S.-DPRK relations will contribute to the peace and prosperity of the Korean Peninsula and of the world, and recognizing that mutual confidence building can promote the denuclearization of the Korean Peninsula, President Trump and Chairman Kim Jong Un state the following:

1. The United States and the DPRK commit to establish new U.S.-DPRK relations in accordance with the desire of the peoples of the two countries for peace and prosperity.

2. The United States and the DPRK will join their efforts to build a lasting and stable peace regime on the Korean Peninsula.

3. Reaffirming the April 27, 2018 Panmunjom Declaration, the DPRK commits to work towards complete denuclearization of the Korean Peninsula.

4. The United States and the DPRK commit to recovering POW/MIA remains, including the immediate repatriation of those already identified.

Having acknowledged that the U.S.-DPRK summit — the first in history — was an epochal event of great significance and overcoming decades of tensions and hostilities between the two countries and for the opening of a new future, President Trump and Chairman Kim Jong Un commit to implement the stipulations in this joint statement fully and expeditiously. The United States and the DPRK commit to hold follow-on negotiations led by the U.S. Secretary of State, Mike Pompeo, and a relevant high-level DPRK official, at the earliest possible date, to implement the outcomes of the U.S.-DPRK summit.

President Donald J. Trump of the United States of America and Chairman Kim Jong Un of the State Affairs Commission of the Democratic People’s Republic of Korea have committed to cooperate for the development of new U.S.-DPRK relations and for the promotion of peace, prosperity, and security of the Korean Peninsula and of the world.