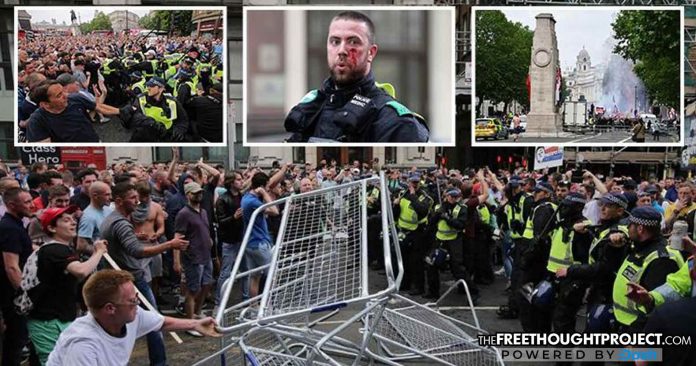 London, UK – Thousands marched in a protest in support of right-wing activist Tommy Robinson in Trafalgar Square over the weekend and called for his release as they held up placards, waved the Union Jack, and chanted “We want Tommy out” as they pledged their support to the English Defence League founder.

Robinson, 35, was arrested and jailed for contempt of court on May 25 outside Leeds Crown Court after broadcasting on Facebook Live, thereby ignoring reporting restrictions on a case involving a “pedophile grooming” trial purportedly involving 29 Muslim immigrants. He was arrested, brought before a judge, and given a 13-month prison sentence within five hours.

Robinson, who is a strong proponent of a nationalist British identity, has spoken out publicly against Muslim immigration to the UK, while critics maintain he is a bigot and racist. Regardless of his views, however, he should be allowed to say them without fear of arrest. But this was not the case.

During the protest, British riot police eventually drew batons and began to get aggressive with the crowd as they attempted to push them back, resulting in sporadic clashes between riot police and demonstrators. Five police officers were reportedly hurt in the clashes, none of their injuries were reportedly serious.

In footage of the protest police can be seen being chased down the street by the rowdy protestors after their attempts at crowd control fails:

‘I am here to tell you that you will never walk alone. And we are here to tell the world, and the UK government in particular: “Free Tommy Robinson!

Downing Street is just around the corner, so maybe once again, as loud as possible we can let them hear our message: “Free Tommy Robinson!

Tommy Robinson was arrested on 25 May outside Leeds Crown Court after using social media to broadcast details of an ongoing trial which was subject to reporting restrictions. He was arrested, brought before a judge, and sentenced within five hours. The judge ordered a media ban on his arrest and imprisonment, even forcing British publications to delete their articles about the case.

Such measures are common practice in North Korea and Saudi Arabia. It is sad to see how Britain, the cradle of Western democracy and the rule of law, is fast descending into tyranny.

More than 600,000 people have signed a change.org petition pleading with Prime Minister Theresa May to free Robinson.

As we previously reported, Robinson is without question a thorn in the side of the British establishment, as he has been vocal in his coverage of grooming gangs – a topic the UK media rarely covers – since at least 2011.

As the National Review explained in their article, Tommy Robinson Drew Attention to ‘Grooming Gangs.’ Britain Has Persecuted Him.:

The whole subject is so ugly and uncomfortable that very few people care to linger over it. Robinson is an exception. For him — as he said in a 2011 interview with the BBC’s Jeremy Paxman — the “grooming gangs” issue isn’t something that afflicts some far-off towns but people in the working-class communities that he knows. And while there are journalists (notably the Times’ Andrew Norfolk) who have spent considerable time and energy bringing this appalling phenomenon to light, most of British society has turned away in a combination of embarrassment, disgust, and uncertainty about how to even talk about this. Anyone who thinks Britain is much further along with dealing with the taboo of “grooming gangs” should remember that only last year the Labour MP for Rotherham, Sarah Champion, had to leave the shadow cabinet because she accurately identified the phenomenon.

While Robinson may ostensibly be locked up for “violating the rule of law,” per a technical violation of his probation, let’s be clear: Tommy was targeted because he espouses unpopular ideas and brings attention to subjects the UK power structure doesn’t want within pop culture’s purview. While in no way endorsing Robinson’s particular worldview, his right to espouse any world view — short of advocating the incitement of violence — should be unimpeachable!