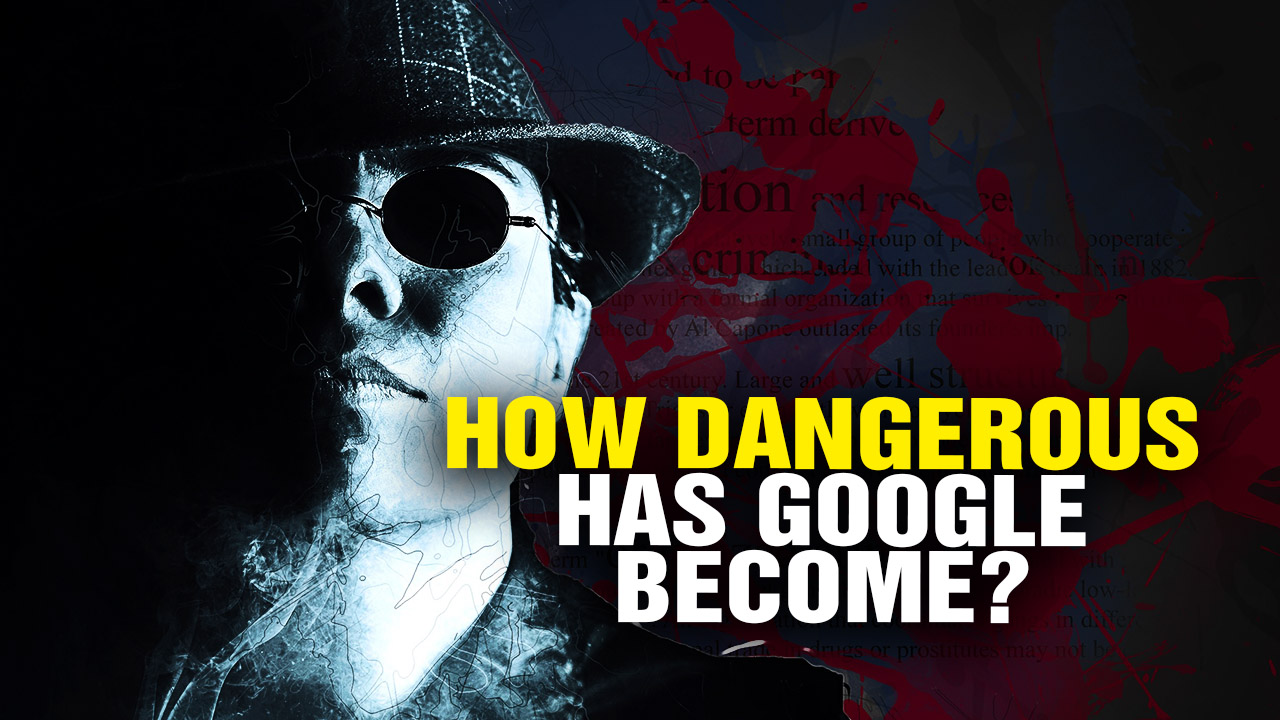 (Natural News) The radical Left — which now controls tech giants like Google and Facebook — can’t win any debate (or elections) based on facts or logic, so they resort to brazen censorship to silence all opposing views in the hopes of dominating the culture by cheating. “These activists want the playing field to be tilted in favor of their ‘politically correct’ worldview so that democratic outcomes like the 2016 presidential election can never happen again,” warns Rep. Kevin McCarthy (R-CA), a member of Congress. “Censorship like this undermines public discourse and trust in our institutions — and it is likely to get worse before it gets better.”

In fact, it’s now clear that Google, YouTube, Facebook and Twitter have all decided to ban all the speech they oppose in the hopes of achieving a kind of “cultural coup” that silences any views they oppose, including biological science facts such as the fact that there are only two genders, not an infinite number of imaginary “gender fluid” delusions. This insidious censorship stunt is being pursued with the desire to banish all conservatives from the internet, but unless it is reversed, my analysis concludes it may actually lead to kinetic warfare that’s likely to involve tech giants’ headquarters being necessarily targeted by pro-human rights forces attempting to halt tyranny and restore freedom of speech, a basic human right that’s now being systematically violated by Google. (See more details below.)

How Google is deliberately driving America toward open warfare

Google, in other words, is driving America toward kinetic civil war, attempting to silence half the country by exploiting and abusing its position of near-monopoly power. As I write this, for example, YouTube continues to ban my entire video channel without any justification or logical reason. It’s now confirmed that Google actively censors natural health websites in order to protect the criminal interests of Big Pharma, and YouTube even shuts down entire channels for posting videos that tell the truth about CBD oil and the healing potential of cannabis medicine. In fact, YouTube actually told Natural News that CBD videos are “dangerous to society” just like bomb-making videos.

These censorship claims are not merely absurd, but dangerous to society. Online censorship, in effect, has become the single greatest threat to the future of our country. The free flow of speech is just as important to society as the free flow of commerce or electricity. For biased, dangerous corporations to selectively restrict the flow of speech only for those who hold conservative or libertarian views is wholly unacceptable and will not be tolerated by free people. Cutting off freedom of speech to certain targeted groups of people is essentially denying them the human right of expression, and that means Google has become a threat to human rights.

My belief on this is shared by millions of Americans: A “free society” cannot survive when the window of allowable speech is controlled by a malicious, radical, left-wing, anti-American corporate giant that colludes with Big Pharma (and communist activists) to silence free speech. Google has become, as we say, a “clear and present danger” to America. It must not merely be stopped to save America; it must be completely neutralized and stripped of all influence over the world of online speech.

Google, in effect, has become the authoritarian tyrants our Founding Fathers warned us about. In the 1700s, the greatest threat to our liberties was a rogue government. That’s why we have the Second Amendment, which was written as a national immune systemagainst government tyranny. The historical idea of the Second Amendment is that if the government tyrants get out of control, the citizens will take up arms against them and reestablish the proper level of humility in government, which only derives its power from We the People, after all. But today, the greatest threat to our liberty is a powerful, domineering corporation known as “Alphabet” (i.e. Google, YouTube, etc.). The First Amendment does not specifically restrict corporations from banning free speech, and the Second Amendment was not written for the people to take up arms against private corporations. Thus, we now face a new, grievous threat to our freedoms that our forefathers could not foresee, and for which no constitutional mechanism of defense exists.

It follows that the defeat of Google cannot be achieved through purely constitutional arguments. Google must be neutralized, defeated or disbanded through other means which are not specifically stated in the United States Constitution. The best option, as explained below, is regulatory control enforced by government to demand a level playing field when it comes to freedom of expression.

We must defeat Google or lose our country forever

In my analysis, if Google’s vindictive censorship is not halted, it will eventually escalate the divide in America to the point of actual civil war (i.e. kinetic warfare between political factions). I don’t condone this outcome and don’t wish to see it occur, but when the tech monopolists crush the freedom of speech of half the country, denying them the right to speak, debate or engage in public discourse, sooner or later that half of the country will tire of living under tyranny, and they will realize the only course of action remaining to them is to physically resist the “techno tyranny” through last-resort actions (see the quote from Milo, below, for more details on this growing realization). Google no doubt knows this and is deliberately attempting to drive America into a state of civil war so that globalist-leaning Leftists can call for UN intervention, of course.

The far more desirable alternative for resolving Google’s censorship plot is to force the tech giants to halt their censorship under the threat of fines or criminal arrests carried out by government. The government, in other words, needs to figuratively put a weapon to the head of Google (and Facebook, Twitter, etc.) and tell them if they don’t level the playing field, government coercion will be invoked to force content fairness upon them. If this sounds harsh, remember that all government regulatory enforcement is effectively carried out at the end of a gun. When the IRS says you have to pay up or lose your freedom, it is a threat that’s ultimately enforced by government men with guns who will take away your freedom and your property if you don’t comply.

This level of government coercion is routinely deployed against individual Americans but rarely aimed at powerful corporations. And that’s part of the problem: To level the playing field of public discourse, government must quite literally threaten Google and other tech giants with criminal indictments and huge fines if they refuse to change their ways and halt their censorship agendas. (One proper role of government is to enforce a level playing field in both economic markets and the market of ideas.)

Until government intervenes and forces Google to comply with basic rules of public fairness, the censorship will only accelerate, expanding the list of those who are censored in what McCarthy calls the “Silenced Majority.”

Will Republican lawmakers do anything useful, or does this end in “Facebook’s gonna get firebombed” ?

“This must end, for the sake of our country,” McCarthy writes. He goes on to explain, “In the coming weeks, I will join with my conservative colleagues in candid conversations with many of these companies to make it crystal clear this behavior is not only wrong but threatens the trust of institutions with so much potential for our country.”

I hope McCarthy understands the urgency of his mission, because I fear that if Congress fails to force Google and other tech giants to respect basic rules of fairness, sooner or later “Facebook’s gonna get firebombed,” as Milo Yiannopoulos recently warned. From NewsTarget.com:

“This is obviously going to end in civil war,” Yiannopoulos said in a recent interview with conservative radio host Alex Jones. “Facebook’s gonna get firebombed, CNN people are gonna be attacked, and we don’t say that with any pleasure….” Milo went on to say that “there is only one inevitable consequence when all of the architecture of civil society, everything is designed to attack decency and beauty and truth and goodness… and real news… and reality….”

None of us wish to see this break down into kinetic warfare, with squads of armed patriots occupying Google and Facebook offices across America to force an end to censorship and restore basic human rights to the internet. But in my analysis, that’s likely where this is headed if Congress doesn’t act to restore the First Amendment across the internet. What Americans are increasingly realizing is that Google is already waging a dangerous war on U.S. soil, and that we will all lose our freedoms and liberties forever if Google’s censorship is not halted. At some point, I predict, the backlash will escalate into realms we’d all rather avoid.

To help create alternative platforms and possibly avoid a civil war, I’m busy launching REAL.video, a free speech alternative to YouTube, which openly allows videos on firearms, cannabis medicine, religion and other topics that are routinely banned by Google. No doubt, Google will try to censor the entire REAL.video website, however, which brings us back to the original problem. America either forces Google to halt its outrageous censorship, or this all ends badly, no doubt.

Listen to my podcasts below to learn more about REAL.video, launching July 4th (beta). You can also go to REAL.video right now to request your own video channel (it’s free).