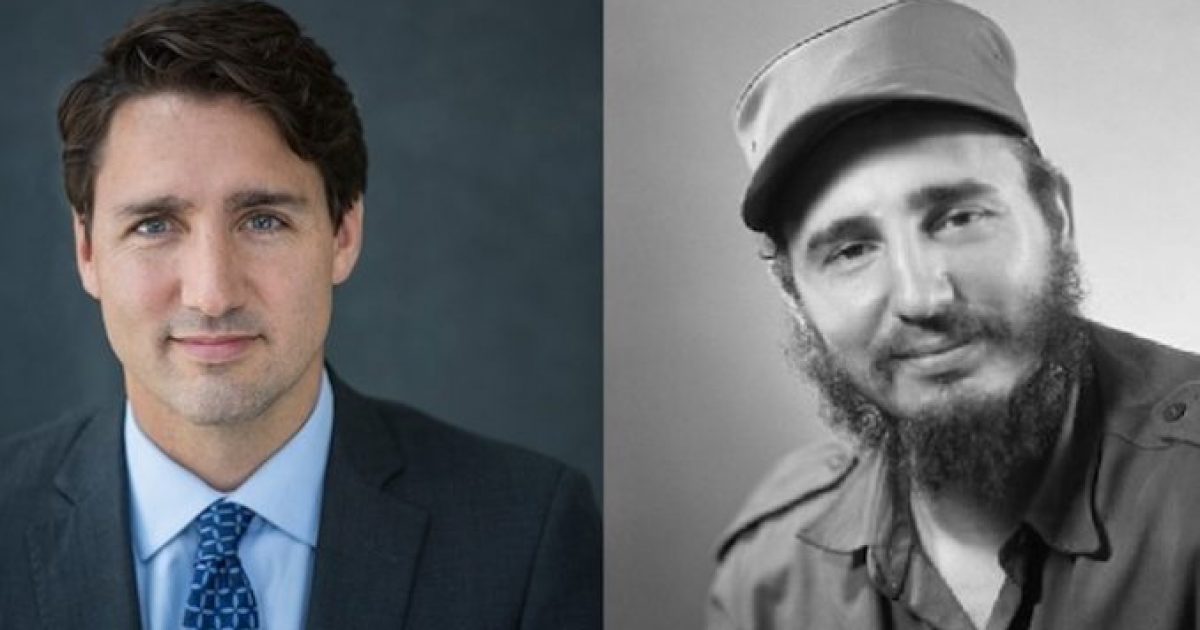 There has been a rumor going around about Canada’s Prime Minister Justin P. Trudeau, practically ever since he was elected in 2015.  The rumor is that he is the illegitimate son of Fidel Castro. Of course, this has been highly denied by the Canadian government, fact checker sites, and by Trudeau himself.

It seems highly likely Justin Trudeau may, in fact, be Castro’s son when physical features such as facial, height, and stature are examined. Justin is a carbon copy of Castro in almost every aspect. To compare the two in facial features, side by side, Justin looks like a young, clean shaven Fidel Castro, their eyebrows, nose, mouth, and bone structure are identical.  Hair color is also the same.

One thing is for sure, and that is his claimed father, former Prime Minister of Canada, Joseph Phillippe Pierre Yves Elliott Trudeau, known as Pierre Trudeau bares no physical resemblance to Justin Trudeau.

Certainly, Margaret Trudeau would have had many chances to have had a tryst with Castro during the time necessary for conceiving Justin since much contact was made between Pierre Trudeau and Castro during the late 1960s and their famous meeting in 1976 when the Trudeau family visited Castro in Cuba.

During the 1976 meeting, a special fondness can plainly be seen between Castro, Margaret and baby Justin.

During the 1970s, Margaret Trudeau had a history of wild parties and would disappear for days in her promiscuous lifestyle, having many affairs with actors like Jack Nicholson

and various recording artists, which was responsible for her divorce from Pierre in 1984. Margaret would have had plenty of time to have flown to Cuba to be with Castro during her years of living such a wild life. In those days, Margaret spent most of her time drunk and high, and may have been in such bad shape that she herself doesn’t even remember the night her and Castro spent together. Margaret Trudeau also had an affair with Ted Kennedy in 1974.

What is certain about this rumor is when all the evidence is examined from Justin Trudeau’s physical attributes, Margaret Trudeau’s out of control lifestyle, and the divorce between her and Pierre, the pieces of this puzzle couldn’t fit together any better than they do.