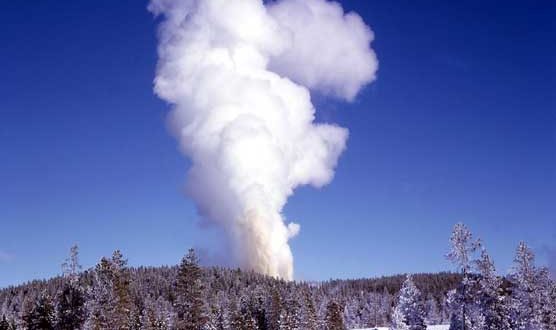 As scientists continue to tell the public not to worry, the largest geyser in Yellowstone has just gone off for the ninth time. Normally, this geyser is quiet for years at a time, but scientists are now saying this is the new normal.

Over the past few months, the Steamboat geyser has sprung to life and now seems to be erupting somewhat on a predictable schedule, at least for the moment. According to Forbes, just after 1 a.m. Monday it sent boiling water hundreds of feet into the air for the ninth time this year. Before this recent string of eruptions, Steamboat had been dormant since 2014. “Major eruptions over the past several weeks have been occurring with surprising regularity (every 6 to 8 days),” wrote Jamie Farrell, Chief Seismologist of the Yellowstone Volcano Observatory (YVO).

This news comes as the Kilauea volcano in Hawaii continues to erupt sending lava flows into the ocean and Guatemalan volcano erupted sent pyroclastic flows into a townkilling at least 100 people.  Are the world’s volcanoes waking up?  Not if you ask scientists.

According to Ed Venzke, who manages the database of Smithsonian Institution’s Global Volcanism Program, the concern is understandable. “If it’s not part of people’s daily lives and suddenly it’s in the news, people sort of freak out a bit,” Venzke told Newsweek. But he indicated that there’s no real need to worry about the volcanoes. At any given time, there are almost always at least 20 eruptions unfolding on earth, and so far this year 49 volcanoes have erupted at some point. Venzke said that puts us on track for a pretty standard annual tally compared to recent years.

Annual totals since 2000 have varied from 63 to 80 eruptions, which means that 49 by mid-June may feel higher than average. But that overlooks a major factor in these statistics, which is the duration of each individual eruption. In this case, an eruption is considered to be ongoing until a volcano has been quiet for three months, this year’s tally was already at 37 on January 1. –Newsweek

“We don’t see any increase in eruptions, we see an increase in reported eruptions,” Venzke said. “It’s not a real increase, it’s just an increase in our knowledge of what’s going on. You have to know the history of a place to plan and take precautions for the future,” he added.