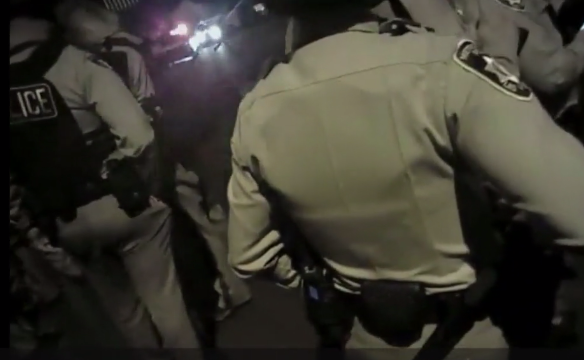 LAS VEGAS (INTELLIHUB) — A Las Vegas Metropolitan Police Department superior who was assembling officers into separate strike teams in front of the Harley Davidson dealership between 10:40 and 10:55 p.m. on October 1, 2017, was captured on video instructing police officers to turn their body cameras to the “off” position, newly released officer-worn body camera video footage reveals.

In the video, spliced together by the Las Vegas Review-Journal, you can clearly see and hear the female commanding officer asking other officers if their body cameras are off in a stern tone. There are several different clips.

“Cameras are off?” The woman says.

Interestingly enough, at about 15 seconds into the video, a quick burst of rapid gunfire can be heard at a distance coming from what sounds to be an MP5, a gun commonly used by SWAT.

It’s also important to point out that the videos were released without any timestamps likely in an effort to make it difficult for journalists to piece together any sort of timeline whatsoever. However, we know the videos were captured between 10:40 and 10:55 p.m. due to the fact that Metro’s Air 5 helicopter can be heard planted firmly on the deck in the background. This is the exact time frame that two helicopter snipers were being loaded into Air 5 for aerial deployment. The two snipers were given orders to mitigate any threats, as reported by Intellihub on May 27, 2017, in the article Two helicopter snipers were deployed on the night of the 1 October massacre.

Why were  LVMPD police officers instructed to turn “off” their body cameras on the night of the Las Vegas s hooting against department rules?

Why were @LVMPD #PoliceOfficers instructed to turn "off" their body cameras on the night of the #LasVegasShooting against department rules?