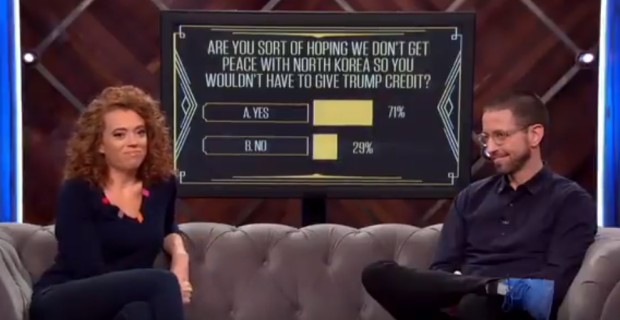 A live TV poll taken on Michelle Wolf’s Netflix show found that 71% of the comedian’s liberal audience would rather peace with North Korea fail than see Donald Trump take credit for it.

The audience was asked, “Are you sort of hoping we don’t get peace with North Korea so you wouldn’t have to give Trump credit?”

Only 29% said they wanted peace with North Korea given the option.

Video: 71% of audience for @MichelleIsaWolf’s @Netflix show @TheBreakNetflix says yes to “hoping we don’t get peace with North Korea so you wouldn’t have to give Trump credit.” #TTT pic.twitter.com/z4S7Y4WgQq

Wolf’s guest on the show subsequently remarked, “That’s how liberal they are that they would rather the world explode, they’re like ‘I told you guys he was an asshole’.

In other words, a significant majority of leftists would happily risk nuclear war, so long as it meant Trump would look bad.

When conservatives talk about how many on the left “hate America,” it’s seen by most as a tired cliché, but when you see clips like this it really makes you wonder.

Trump 2020 campaign manager Brad Parscale summed up the mood of many when he tweeted, “Here is the media’s and left’s position in a nutshell. It isn’t about America.”

Indeed, it seems that the left is so beset by Trump Derangement Syndrome that they’re quite happy to see the pilot crash the plane even though they’re on it.