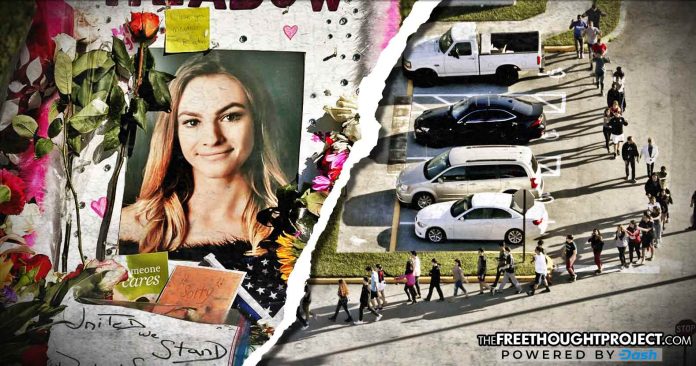 As we reported extensively in the aftermath of the Parkland school shooting in February, law enforcement failed on multiple levels that day, fumbling numerous opportunities to intervene in the attack. Now, months later it has been revealed that the first line of defense in the shooting, a guard for the school named Andrew Medina, was unfit for his position and should not have been trusted with the lives of children.

Medina has been criticized for not taking proper action during the attack, and many critics say that if he did take action, he could have saved many lives. This week, new details have emerged about Medina’s past at the school which gives an ugly glimpse into his character. According to the family of Meadow Pollack, a young girl who died in the shooting, 39-year-old Andrew Medina harassed a number of girls at the school, including Meadow. Medina was reported on two separate occasions, but no action was ever taken against him, despite the seriousness of the allegations and the fact that there were multiple reports.

According to records obtained by the Sun Sentinel, Medina propositioned one student and made a lewd comment to another in February 2017, a year before the attack.

“Both students became so uncomfortable with Mr. Medina’s comments and actions, they sought out different routes to their classes in an attempt to avoid him,” the report said.

One girl, who spoke with CBS4 anonymously, said that she experienced harassment from Medina while at school.

“One time he said to me that his kids were gone for the weekend and that he wants me to come over and he wants to buy drinks for me but I can’t tell anyone,” the girl said, adding that, “She doesn’t have a voice anymore so I need to be that voice for her because this man should not be able to work on a school campus, period.”

Medina does, in fact, still work for the school system.

The Public Information Office of Broward County Public Schools sent CBS4 a statement regarding Medina, which read, in part:

“The employee was investigated for alleged inappropriate comments to students.  The final determination, after the review process, was to uphold the finding of probable cause for inappropriate conduct from the PSC [Professional Standards Committee]. However, the discipline was finalized at a three-day suspension. There was no direct evidence to distinguish between the conflicting statements provided by the students and the employee, and there were no previous records of discipline for the employee. Andrew Medina continues to be reassigned away from Marjory Stoneman Douglas High School to a non-school work location until further notice”

However, according to the investigation that followed the reports against Medina, security camera footage did confirm aspects of one of the girl’s stories, and Medina admitted to “being a little friendly” when interviewed about the harassment. So there is actually evidence against him, it is just that his word was chosen over the students’ word, which is the standard operating procedure in public schools.

Meadow’s family is shocked that he still has his job.

“The School Board still elects to reassign them. It’s mind-boggling and upsetting that no one in the county has been held accountable for what happened. Not one person has lost their job,” Meadow’s father, Andrew Pollack said.

“They still won’t fire the guy. There is incompetence everywhere in the Broward schools,” he added.

Sadly, lack of accountability seems to be a common problem in both law enforcement and the school system, which allows for incompetent people to be responsible for life and death decisions.

In an interview taken after the shooting that was made public last week, Medina said that he knew the shooter was a potential problem.

“We had a meeting about him last year, and we said, ‘If there’s gonna be anybody who’s gonna come to this school and shoot this school up, it’s gonna be that kid,’” Medina said.

Yet when the shooting began, Medina did not attempt to intervene, or even call backup. Instead, he saved himself and warned a fellow co-worker. If someone of a more qualified character was filling that role, it is highly possible that many lives could have been saved on that day.