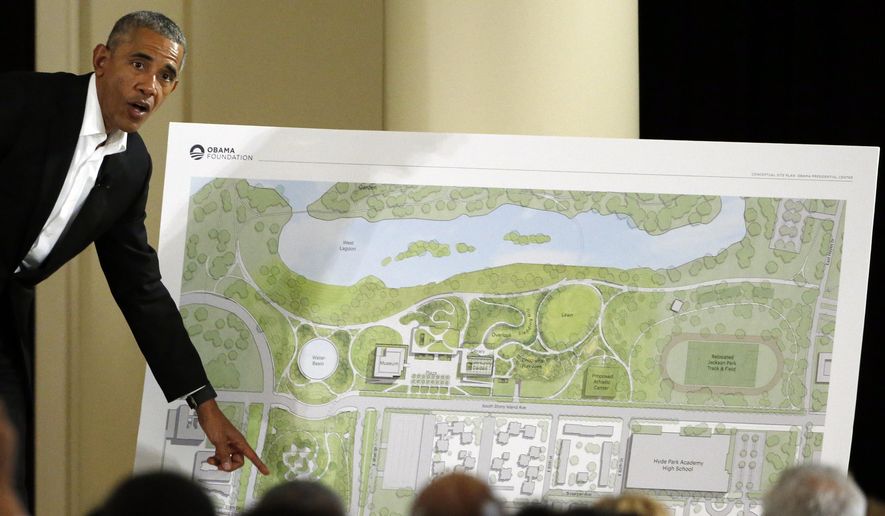 A report put out over the weekend claims that the presidential library of the usurper-in-chief, Barack Hussein Obama Soetoro Sobarkah, will cost the taxpayers of Illinois at least $200 million.

The $200 million is not even the total cost of the library.  According to the Washington Examiner, the total will be $224 million.

The state of Illinois has approved $224 million to pay for street and transportation projects in Chicago’s South Side neighborhood around the Obama Presidential Center site, $199 million of which will fall directly on the shoulders of Illinois taxpayers.

Gov. Bruce Rauner signed into law the legislature’s budget on June 4, which included $174 million for road work in and around Jackson Park — where the 235-foot-tall building would be located — and another $50 million to renovate an above-ground rail stop two miles away.

“Bringing the Obama Presidential Center to Chicago took leadership and vision, and we are gratified that our partners in Springfield also saw the potential for what this means for all of Illinois. The state’s $174 million investment in infrastructure improvements near the Obama Center on the South Side of Chicago is money well spent,” Chicago Mayor Rahm Emanuel said in a statement about the groundbreaking ceremony for the metro stop Friday.

Half of the $50 million Garfield Gateway rail project is funded through a 2016 Transportation Department grant, which provides for rail platform canopies, art, and new elevators and escalators at the station. However, Chicago and other Illinois state residents will still be on the hook for the remaining $199 million to improve infrastructure next to the privately owned Center.

Don’t you just love how politicians call using your money for things that it shouldn’t be used for “investments”?

What real benefit does the city get out of this library?  Nothing really, much like any presidential library.  They are nothing more than self-aggrandizing monuments to men.

As one of the last things that Obama did before leaving office was to unconstitutionally seize thousands of acres of land and declare them national monuments.  The interesting thing is that he is where he is proposing to build is Jackson Park instead of private land.

That’s right, even when putting up an edifice to glorify himself, he still wants to use someone else’s property, and knowing Chicago, he’ll get it, despite groups being against it.

Local residents have repeatedly told city officials at town halls and press briefings they worry about being pushed out of their lower-income community because of the gentrification the center will undoubtedly bring.

The Obama Foundation originally said it would house a presidential library on the property and vowed to have the National Archives oversee the facility because of its placement on public land. But that’s no longer the case, and some are balking at the change in plans.

Now, the question I have is quite simple, which Obama Foundation is setting this in motion?  The one that is tied to terrorism?  Perhaps we need an investigation into the foundation just like we were told we were going to get one of the Clinton Foundation.

On top of that, since there has been all this talk of collusion over the past year and a half, we might also need to see what sort of colluding has been going on behind the scenes to steal this piece of land out from under the people for this edifice.

In fact, one person actually pointed this out.

“You have all this talk about collusion between Trump and Russia, right? To me, that sounds like collusion between the city and the university, and we see the same thing happening in relation to this,” said Jawanza Malone, executive director of the Kenwood-Oakland Community Organization.

Who knew something that will be worth about as much as what floats in a toilet could cost so much.