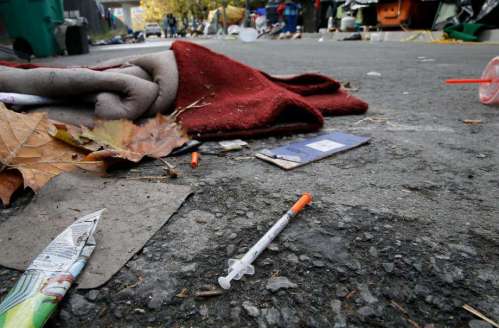 The streets of San Francisco…

Did nobody bother to Google the city they were about to visit? Before you make a trip to San Francisco, see the following:

From SF Gate: It’s something many San Franciscans see on a daily basis, outside their homes or offices and during their commutes. For better or for worse, locals are used to walking by crime scenes, have seen open injection drug use, and have witnessed mental health episodes firsthand.

But when a tourist lands at SFO, guidebook in hand, that reality can be shocking.

“Is this normal or am I in a ‘bad part of town?’ Just walked past numerous homeless off their faces, screaming and running all over the sidewalk near Twitter HQ and then a murder scene. Wife is scared to leave hotel now,” wrote an Australian Reddit user Wednesday.

That person isn’t alone. On Sunday, another tourist from Canada asked the San Francisco Reddit community, “Why is this city so terrifying?”

“I’d been there for probably less than a day, just wandering around the center, and already seen more than enough poverty and suffering to cause me wanting to leave desperately,” wrote another visitor from London in 2017. “I saw many people talking to themselves, or to things that weren’t there. Even in a Macy’s, and there weren’t any police officers to help them or do anything about it.”

Anyone who has hosted friends or family from out of town may have had to field similar questions.

Just those three Reddit posts garnered more than 650 comments, many of which were helpful suggestions (other neighborhoods to explore, safety tips, and more).

But the city’s own visitors’ bureau is struggling to come up with a good explanation for horrified tourists.

“The streets are filthy. There’s trash everywhere. It’s disgusting,” Joe D’Alessandro, president of S.F. Travel told the Chronicle’s Heather Knight in April. “I’ve never seen any other city like this — the homelessness, dirty streets, drug use on the streets, smash-and-grabs.”