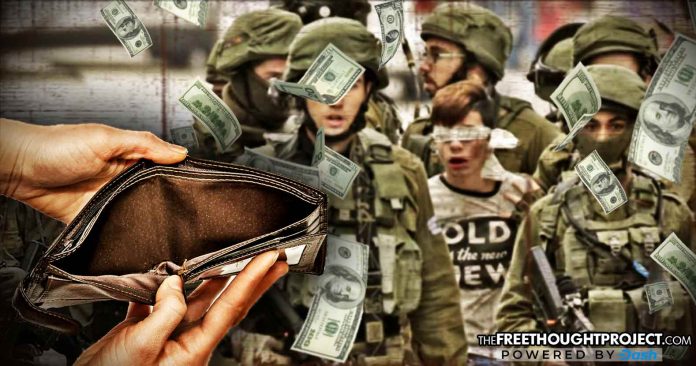 As the United States government admits that Social Security and Medicare services are going bankrupt and will both be completely depleted within the next 16 years, American taxpayers are giving around $10.5 million to a close ally that is routinely accused of human rights violations.

“Both Social Security and Medicare face long-term financing shortfalls under currently scheduled benefits and financing. Lawmakers have a broad continuum of policy options that would close or reduce the long-term financing shortfall of both programs. The Trustees recommend that lawmakers take action sooner rather than later to address these shortfalls so that a broader range of solutions can be considered and more time will be available to phase in changes while giving the public adequate time to prepare. Earlier action will also help elected officials minimize adverse impacts on vulnerable populations, including lower-income workers and people already dependent on program benefits.”

While the increased reduction in Social Security and Medicare funds can be blamed on the federal government, it is not the only area where government spending should warrant serious concern. In December 2010, the Congressional Budget Office estimated that federal debt held by the public was more than $9 trillion or 62 percent of GDP.

The federal debt held by the public is now $16 trillion or 78 percent of GDP, and the latest projectionsfrom the CBO show that it is estimated to increase to $29 trillion or 96 percent of GDP by 2028, which would mark “the largest since 1946 and well more than twice the average over the past five decades.”

As the Foundation for Economic Education reported, while the government continues to spend money it does not have as if there are no consequences, it has gotten to the point where it seems unlikely that the debt will ever be paid back:

“A fair amount of this trouble can be laid at the feet of the federal government and its seemingly insatiable habit of spending money it doesn’t have. It’s gotten to the point that there isn’t really anywhere else in the world that has the amount of money the US government needs to borrow. It seemed so easy to just take that money from the Social Security and Medicare trusts at the time, but with federal spending now higher than it’s ever been (regardless of whether you adjust for inflation or simply count it as a percentage of GDP), it seems very unlikely that that money will—or even can—ever be paid back.”

While the U.S. government’s failure to take care of its citizens may be viewed as a good thing because it lets them turn to solutions in the private sector to solve their problems, the government is still robbing citizens through taxes, and making it look as if it will benefit them in the long run through programs such as Social Security and Medicare.

In reality, the federal government is using the money it extorts from citizens to fund endless wars in the Middle East—with the price tag for the longest war in U.S. history costing double the estimate of what it would cost to end homelessness in the U.S. annually in 2018. Millions of taxpayer dollars are also being spent on questionable foreign aid programs, such as the United States’ increasing pledges of military aid to Israel.

Former President Obama set the record by pledging $3.8 billion to Israel every year for the next 10 years in 2016, with the largest military aid deal in U.S. history. President Trump increased the amount by pledging an additional $75 million in 2018, while Americans suffering from the aftermath of Hurricane Harvey begged for aid.

The United States’ commitment to Israel has stayed the same, even as Israel was caught opening fire on peaceful protesters near their border fence in Gaza, killing dozens and injuring thousands. While other countries accused Israel of war crimes and called for an investigation, the U.S. blatantly ignored the atrocities.

If countries such as Syria, Russia, or Iran, were targeting civilians in the same way that Israel is, the United States would be calling for a full-scale invasion. Instead, the U.S. continues to condone the country’s treatment of Palestinian civilians by sending Israel $10.5 million a day—even when Americans are in desperate need—all while the president in office gained support by promising to put “America First.”