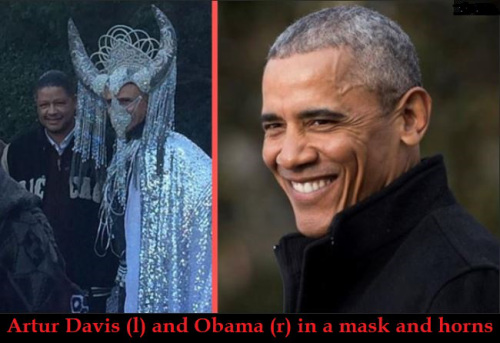 The Baphomet was first drawn and popularized in 1854 by occultist Eliphas Lévi in his book, Dogme et Rituel de la Haute Magie (Dogmas and Rituals of High Magic) — a winged, horned, androgynous, humanoid goat with breasts and phallus. (See “The Devil is transgender”)

Levi called his image the Baphomet — “The Sabbatic Goat” and “The Goat of Mendes.” Lévi’s Baphomet is the source of the Rider-Waite Tarot image of the Devil. The Baphomet goat, together with the downward-pointed pentagram, was adopted as the official symbol — called the Sigil of Baphomet — of the Church of Satan and continues to be used among Satanists. [Source: Wikipedia]

Yesterday, an art illustrator named AnnaMarie Hope uploaded to her Instagramaccount @everysilversea a pic of what appears to be Barack Obama dressed as Baphomet, standing next to Artur Davis.

Note: Artur Davis was a national co-chair for Obama’s 2008 presidential campaign; a U.S. Congressman (D-Alabama) from 2003 to 2011; and a candidate for the Democratic nomination for Governor of Alabama in the 2010 election.

Below are the Obama Baphomet pic (on the left) next to a pic of Obama (right), for comparison.

Those who saw the pic on Hope’s Instagram clearly recognized the Baphomet dude as Obama:

kellygil18: “What’s with your Obama pic?”

unbearableghostbear: “Yeah you got some ‘splainin’ to do about that Obama pic.”

Hope quickly took down the pic, claiming she’d received “too much hate & not enough support”.

Jay Greenberg of NeonNettle says the Obama Baphomet image is not a photoshop: