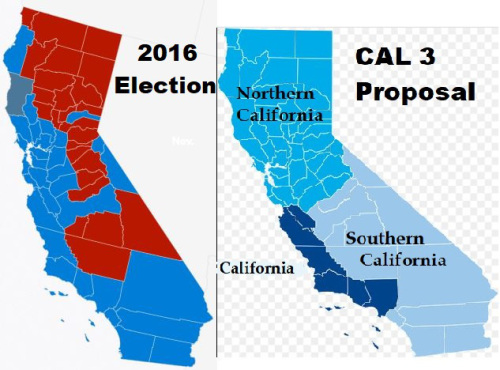 Similar proposals have been debated for years, and failed to gain traction, but this measure has made its way to the general ballot. As reported by Melia Robinson:

This November, Californians will head to the polls to vote on a peculiar ballot measure that asks, “Hey, how do you feel about splitting into three states?”

This is really happening.

A proposal to divide California into three states— Northern California, California, and Southern California — qualified this week to appear on the ballot in November’s general election. It received over 458,000 valid signatures, more than the number required by state law to get on the ballot, thanks to an ambitious campaign called Cal 3 and financial backing from Silicon Valley tycoon Tim Draper, an early investor in Tesla and Skype.

The danger of the CAL 3 proposal is simple. Many California voters have coveted a split for years. A lot of these voters are conservatives that want to break free of what they feel is a state that has been largely overrun by liberal ideology.

So many of those conservative voters will likely vote to support this plan in November. But it really changes nothing for California. The major change will be felt more by the rest of the country than by Californians.

CAL 3 is, among other things, a clever ploy to gain California 4 more senate seats that will likely all be filled by DEMOCRATS.

Talk about shifting the balance in D.C.

Allow me to explain.

The division and proposed boundaries look to be very deliberate by creating not a conservative haven but rather 2 more liberal states.

Conservatives should vote “No” for this reason: Instead of giving Conservatives a voice in state government, CAL 3 will make things worse because the way the proposed state lines are drawn will create two, if not three, Democrat-dominant states.

As things are today, California’s one-party Democrat government is the result of the state’s pattern of population distribution, wherein heavily-populated “liberal” metropolitan cities on the coast determine the outcome of elections. Instead of creating a new state of those “liberal” coastal cities, CAL 3 distributes the “liberal” cities to each of the three new states, thereby ensuring that they will dominate election outcomes in the new states.

Here’s the map of the proposed CAL 3:

Let’s look at a visual to properly grasp how this might play out.

Dr. Eowyn maps out how California voted in 2016 and shows how the proposal would simply split the state into 3 liberal states:

Please notice how the division looks like someone tried very hard not to allow any of the 3 states to swing red, even though there are huge swaths of red on the voting map from 2016. For instance, in Northern California much care was shown to drive the border Southward enough to pick up San Francisco, thus negating that large swath of red in the North.

Currently there are 51 Republicans, 47 Democrats, and 2 “Independents” in the U.S Senate. It’s easy to see that California’s clever plan to add 4 more Democrats to your Senate is dangerous for America.

This November conservatives must vote no on CAL 3.

Dean Garrison is the Publisher of D.C. Clothesline. You are free to republish this article, or excerpts, so long as author credit and a source link are included.