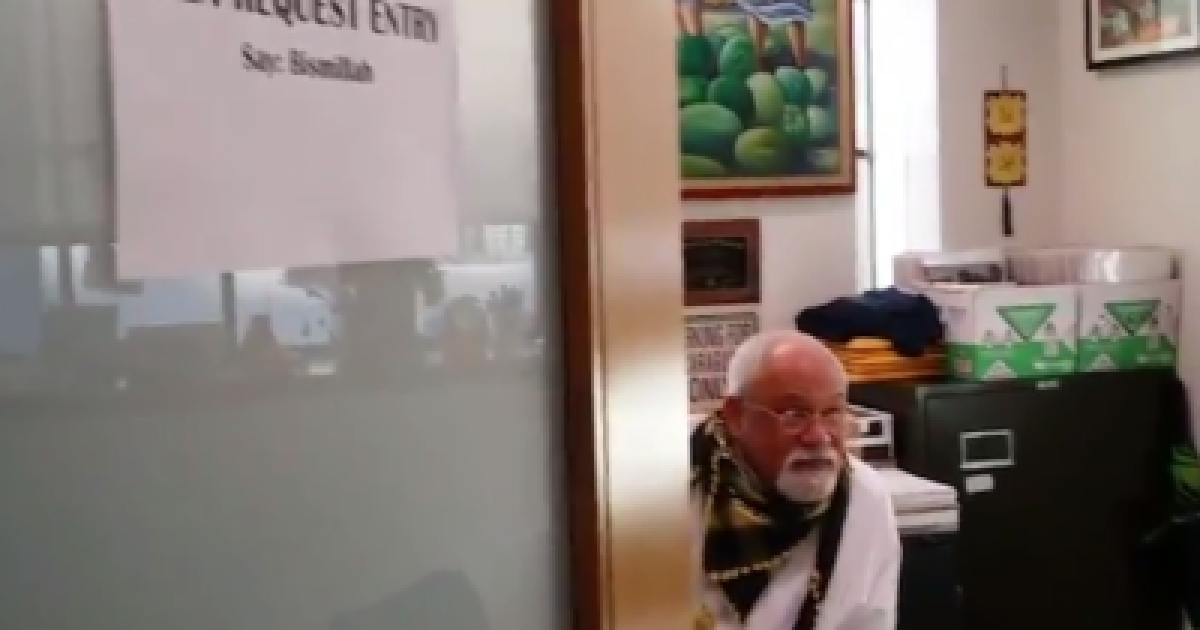 Imagine what the outcry would have been if a Christian professor had required students to say “Praise Jesus” before entering his office. But outside of a few Internet news sites, this Islamic supremacist professor got little notice. It seems already to be taken for granted by large segments of the American population that Muslims are going to demand special privileges and accommodations, and that the proper response is to grant them those privileges and accommodations. I’m surprised that the students who complained about this professor didn’t get disciplined for “islamophobia.”

The University of Connecticut says a Muslim professor retired after students complained that he required them to remove their shoes and say “Bismillah” before entering his office.

Felix Coe, a professor of biology, had posted signs on the door to his office directing students to “REMOVE SHOES BEFORE ENTERING” and “KNOCK FIRST, THEN REQUEST ENTRY Say: Bismillah,” as depicted in a video released Tuesday by Jihad Watch.

The footage in the video was originally taken in December 2017, and also contains an audio clip, from an unspecified date, of Coe interacting with a student who saw that his door was open and was trying to ask about where another professor was.

“Get the hell out of here. I don’t want to see you,” Coe told the unidentified student after she asked him why she needed to remove her shoes to enter his office.

“I am a Muslim,” Coe explains to the student. “You don’t come into my office with dirty shoes; that’s a curse.”

The rest of the video contains footage from December of two men approaching Coe in his office.

“Because I am a Muslim and I don’t want them coming in my office with dirty shoes,” Coe stated.

“But this is your office, this is not a prayer [place],” the man tells Coe. “We have a separate place for a prayer.”

“If a Christian put in here ‘In Jesus’ name’…would this happen?” the man continues….