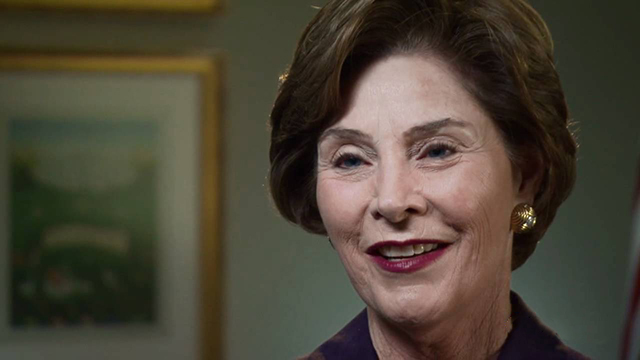 Laura Bush had no issue with her husband “permanently separating” hundreds of thousands of families from their loves ones in the Middle East in a war based on lies, but she’s outraged by the US government separating children from their illegal immigrant parents caught invading America.

Though Obama did the same for years, for some reason she only cares about it now that it’s a rallying point for #TheResistance. Former first lady Laura Bush spoke out Sunday night about the separation of families on the US border, writing a harsh criticism of the current zero-tolerance immigration policy being enforced under the Trump administration.

Bush, whose opinion piece ran in The Washington Post, decries the separation of children from parents entering the United States illegally as “cruel” and “immoral.”

It’s a rare public admonishment of current administration policy from Bush, who has seldom weighed in on politics since her husband left office.

Translation: no one gives a s**t about ¡Jeb! or George saying this so they had Laura do it.

It was a 1997 Supreme Court ruling which said illegal immigrant minors could not be held in detention like adults. Criminals are separated from their children in jails across America and the world.

“I live in a border state. I appreciate the need to enforce and protect our international boundaries, but this zero-tolerance policy is cruel. It is immoral. And it breaks my heart,” Bush writes.

Killing all those people in Iraq when Saddam Hussein had nothing to do with 9/11 was cruel, immoral, and violated international boundaries.

(Incidentally, when her husband was still in office back in 2001, Laura Bush said his “war on terrorism” was a fight to advance feminism in the Middle East, or as she put it, “a fight for the rights and dignity of women.”)

“Our government should not be in the business of warehousing children in converted box stores or making plans to place them in tent cities in the desert outside of El Paso,” she continues. “These images are eerily reminiscent of the Japanese American internment camps of World War II, now considered to have been one of the most shameful episodes in U.S. history.”

Indeed, these are literal concentration camps!

“Americans pride ourselves on being a moral nation, on being the nation that sends humanitarian relief to places devastated by natural disasters or famine or war,” she writes. “We pride ourselves on believing that people should be seen for the content of their character, not the color of their skin. We pride ourselves on acceptance. If we are truly that country, then it is our obligation to reunite these detained children with their parents — and to stop separating parents and children in the first place.”

Bush calls for “good people at all levels of government who can do better to fix this.” She also invoked the name and memory of her mother-in-law, former first lady Barbara Bush, who died in April. Barbara Bush was also an advocate for children while her husband, George H.W. Bush, was in office.

Indeed, remember how Barbara advocated for all those civilians her husband killed in Iraq the first go-around? It’s almost as though there’s a pattern here!

“My mother-in-law never viewed her embrace of that fragile child as courageous. She simply saw it as the right thing to do in a world that can be arbitrary, unkind and even cruel,” writes Bush. “She, who after the death of her 3-year-old daughter knew what it was to lose a child, believed that every child is deserving of human kindness, compassion and love. In 2018, can we not as a nation find a kinder, more compassionate and more moral answer to this current crisis? I, for one, believe we can.”

Your husband along with Hillary Clinton created the refugee crisis and the rise of ISIS. Bush’s policy of “invade the world, invite the world” caused unimaginable amounts of human suffering both in America, Europe, and across the Middle East — the effects of which are still being felt today. He got less than 1% in the polls despite coming into the race a statistical favorite with $103 million from corrupt mega-donors. Trump destroyed him in a matter of days.

Empty appeals to embrace national suicide “for the children” and for “our values” no longer hold any weight as we can see by Paul Ryan and others announcing their resignations.

The best way to help these kids is to build a wall and secure our southern border so their reckless, criminal parents don’t try to sneak them into the country with the aid of Mexican human smugglers who reportedly rape some 80% of the women and girls who make the trek(another issue Laura Bush couldn’t be bothered to speak out against).