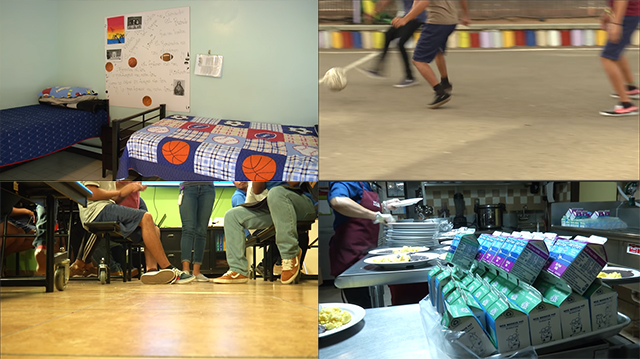 You won’t believe the shocking conditions which children are being held in at President Donald Trump’s concentration camps, aka “Don’s Death Camps!”

I want to warn our readers: these images are deeply disturbing.

A youth migrant shelter in El Cajon opened its doors to journalists on Friday amid a public outcry about the Trump administration’s practice of separating families at the border.

Casa San Diego houses 65 boys between the ages of 6 and 17. About 10 percent of the boys were separated from their parents by the U.S. government, according to Gerardo Rivera, associate vice president of immigrant children’s services for Southwest Key Programs, the nonprofit that runs the shelter.

Rivera downplayed the difficulties that family separation has brought to the shelter, saying that Southwest Key — which operates 27 shelters in California, Arizona and Texas — is used to dealing with kids who are upset or traumatized for a number of reasons, including gang violence in their home countries.

“This is not a new thing for us in the shelters,” he said. “These kids come in and they’re traumatized from a long time ago.”

This is textbook Holocaust denial, folks.

Rivera said even the boys at the shelter who crossed the border alone are dealing with family separation anxieties because some of them lost parents to crime in Central America or had to say goodbye to loved ones at home.

The Department of Homeland Security transfers children to the Department of Health and Human Service’s Office of Refugee Resettlement, which places them in shelters like Casa San Diego. Shelters proliferated after 1997, when the Supreme Court ruled that immigrant minors could not be held in detention like adults. Case managers at the shelters try to find sponsors or foster care for the children, with an 1:8 ratio of case managers to children. Media tell us @realDonaldTrump is keeping kids in “cages.” The facility I visited is a dormitory with a school, clinic, and outdoor recreation. They give them new clothes .They have field trips to parks & zoos. They even had a “prom.” Sad situation but not what we have been told.

Inside a shelter for illegal alien children separated from their parents … does this look like a concentration camp? https://t.co/mVjmGN0BJ5

The two tried to claim these shocking photos are not evidence of child concentration camps: They also shamefully reported that these detained immigrant children enjoy a higher standard of living than 13 million impoverished American children:

Deniers are also trying to claim this photo from former Washington Post reporter Jose Antonio Vargas doesn’t depict a child being held in one of Don’s Death Camps, but is actually from this protest staged by anti-Trump open borders activists in front of Dallas City Hall in 2018: The lengths conservatives will go to to deny Trump’s immigrant child Holocaust is truly incredible.

[Note for first time readers: this was satire! I thought it was as obvious as it gets but with leftists going out of their mind with Trump Derangement Syndrome I figured I’d spell it out, even if it spoils the joke, as some people seem to be confused!]