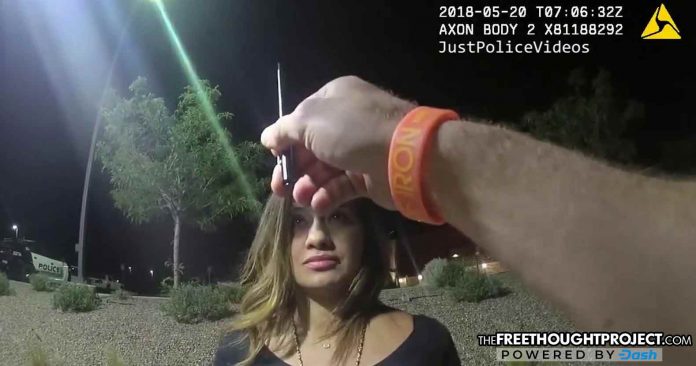 Albuquerque, NM — Body camera footage has been released that shows tough-on-crime, pro-law enforcement Republican state Rep. Monica Youngblood, 41, who was arrested on suspicion of driving under the influence, crying and pleading with an officer at a DWI checkpoint during her arrest—which subsequently resulted in a review by the state attorney general of the politician using her position in an attempt to get out of arrest.

State Attorney General Balderas launched the probe after the state Democratic Party accused Youngblood of using her political position to get out of her arrest.

“Rep. Youngblood was elected to use her position to help her constituents, not put them in harms way and then attempt to get out of an arrest by citing her legislative actions,” Democrat Marg Elliston, who referred Youngblood for investigation, said in a statement.

After she was arrested on suspicion of drunk driving, Youngblood can be heard crying and pleading with the Albuquerque police officer who had arrested her, telling the officer she is a staunch law enforcement advocate, and noting she had written legislation to protect cops.

“So many people tell me that you guys treat people of color like shit and I always stood up for you,” Youngblood can be heard telling officer Joshua Montaño.

“I literally fight for you guys,” she told Montaño at one point. The officer replied, “Well, that doesn’t make it OK to drink and drive.”

Footage of the encounter showed Youngblood refusing to take a breath alcohol test after an officer handcuffed her following failed field sobriety tests at a DWI checkpoint. The officer stated in his report that Youngblood smelled of alcohol and had bloodshot watery eyes. Under the “implied consent” law in New Mexico, drivers can be charged with aggravated DWI for refusal to submit to a breath or blood test if police believe the person to be intoxicated.

During the incident, Youngblood told the officer that she had not been drinking that night but that she had been in an argument with her boyfriend. The legislator voluntarily submitted to field sobriety tests, including standing on one leg, counting backward and walking a line.

Officer Montaño told Youngblood that the tests were “not pass-or-fail tests” but were used to check for certain clues of intoxication, and while Youngblood maintained her innocence, the officer told her, “you exhibited quite a bit of those clues.”

While being processed by the office, Youngblood proceeded to tout her support for police as a legislator, specifically mentioning that she had sponsored a bill to reinstate the death penalty for murdering law enforcement officers.

Youngblood was booked on one count of aggravated DWI for declining a breath test and released. She plead not guilty during an arraignment on June 13. If convicted, she faces a mandatory 48 hours in jail.

It never ceases to amaze, how a tough-on-crime politician wants special treatment when faced with the eventuality of their own creation. In many ways, this case is similar to that of Texas Appeals Court Judge Nora Longoria, who was caught going just over the speed limit while traveling drunk in her Lexus late one evening. When she was pulled over by police she immediately flashed her badge and told them that she was a judge.

Longoria had plainly admitted to drinking at least five beers before getting behind the wheel, expecting that her badge would grant her extra rights—specifically the right to drive drunk. It is also important to point out that if she said she had five, then she probably had 12 beers.

She then pleaded with police not to arrest her and was almost charged with resisting arrest because she would not allow them to put handcuffs on her.

“Please let me go home. I live a couple of miles away … you are going to ruin my life. I worked hard for 25 years to be where I am today,” she told police.

On November 20, Longoria’s pleas were answered by Judge Rolando Cantu of the Hidalgo County Court, when he dismissed her case, revealing that those that who are in a position of power are not treated in the same manner as the rest of the public.

Later, in a public admonishment, the State Commission on Judicial Conduct condemned Longoria’s attempt to use her position to get out of the ticket—but still chose to give her the lowest punishment offered by the commission.

While it looks like Youngblood will not get the same treatment as Longoria, both cases explicitly highlight just how the power-elite—whether on a local or national level—seem to believe themselves to simply be above the law.

Youngblood is up for re-election in November.