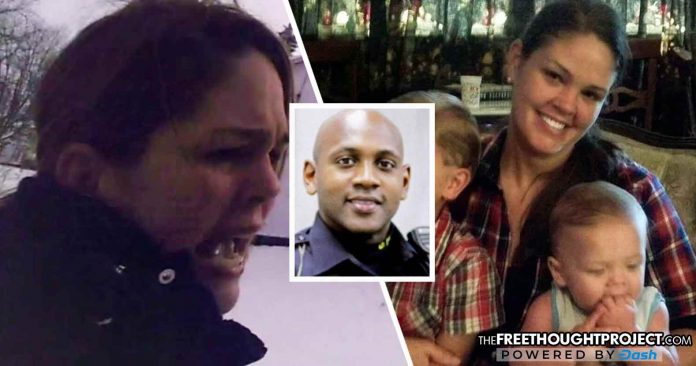 Burlington, IA — On Monday, the taxpayers of Burlington, Iowa were told that they will be hit with a $2 million bill to pay for a police officer who shot and killed an innocent mother. The tragic scenario was captured on video and the fact that most of that video remains a secret was part of the reason the family received the settlement in the wrongful death suit.

The settlement was announced on June 6, but the amount had not been made public until Monday.

Last month, during a federal court hearing in Davenport, Iowa, officials revealed that the confidential police video—a key piece of evidence in exonerating a cop who killed the innocent mom—does not corroborate the cop’s claims that he was bitten by a dog before firing the fatal shots that accidentally killed the mother of two.

The alleged dog bite is a key component in the case which allowed police officer Jesse Hill to be justified in firing the shots that killed Steele in January of 2015. According to the official story, the German shepherd jumped on Hill’s back and bit his thigh, causing him injuries which required treatment.

The shooting was ruled justified and Hill was not disciplined, according to investigators, because Hill was in fear of his life during the dog attack and therefore did nothing wrong when he fired his weapon multiple times—hitting Steele in her chest, killing her.

There is only one problem though, according to the family’s attorney, the video does not show any of this. Burlington Police, the Iowa Division of Criminal Investigation and the Des Moines County Attorney have all refused to release the entire video which they say does show it. However, those who have seen the whole video, say it never shows any such bite. As the Des Moines Register reported last month:

In a separate legal battle, the Iowa Department of Public Safety and the Burlington Police Department have been charged with violating the state’s open records law for refusing to release the full video, saying it is part of an investigative record and is confidential.

The video was not played in open court Thursday. But Chief Judge James Gritzner of the U.S. District Court for the Southern District of Iowa allowed attorneys in the case to describe pieces of the unreleased footage.

Not only does the unreleased video show no bite, but Hill never says that he had been bitten — a direct contrast to what he wrote later in his report, Dave O’Brien, a Cedar Rapids attorney who represents the Steele family, said during the hearing.

“This is a tragic case. This officer acted in a way that was entirely unreasonable,” O’Brien said in during last month’s hearing.

On Monday, O’Brien responded to the standard statement of authorities denying any and all wrongful conduct.

“However, everyone should know that cities and their insurance carriers do not pay $2 million to settle a claim unless they have concluded the claim has significant merit,” O’Brien said. “Make no mistake about it, this settlement vindicates the Steele family’s claim that Hill acted wrongfully in causing Autumn’s death.”

The Steele family and the city of Burlington asked Judge Gritzner to consider these facts last month and issue a summary judgement in their favor which would decide the case without the need for a trial. Apparently, they got their wish.

The tragic incident unfolded that fateful January day as Gabriel Steele, Autumn’s husband, was loading up their 4-year-old son, when Autumn began yelling at Gabriel and the police were called.

Officer Hill was at the Steele residence acting as an escort in their domestic dispute incident. During this commotion, the couple’s dog came running out of the house.

In the video, we can hear the dog growl, at which point Hill says, “Get your dog.” Only moments later, Hill fired off two rounds.

One of the shots struck Autumn Steele in the arm and another in the chest. The dog was also hit, but he recovered. In a previous version of this story, the Free Thought Project reported that the dog was not hit. However, new information shows that he was.

As this current case illustrates, since the killing, the Burlington Police Department and the Iowa Department of Criminal Investigation have been anything but transparent in this investigation.

Other than releasing the ridiculously short 12-second video, the DCI, the BPD, and the Des Moines County Attorney’s office have denied requests for all other portions of the investigation.

In her report, Beaver cited the fact that Hill is a police officer. Beaver says that he was in a difficult situation in which he was trying to stop a domestic dispute as well as protect himself from a dog. Being that he was a police officer, in this situation, he is entitled to special treatment, according to Beaver.

Does Beaver’s logic make any sense at all?

This was a clear-cut case of one person negligently taking the life of another person and now, we are finding out that there is an alleged cover up, and the only people that will be held liable are the taxpayers.

This month, the Iowa Freedom of Information Council filed a motion in federal court to uncover the secret video and evidence that has been sealed in this case. As the Des Moines Register notes, even Steele’s family’s motion to unseal records was sealed, the council noted in its motion.

“Such secrecy undermines the accountability of government officials and the public’s acceptance of any result reached through use of the federal judiciary,” the council’s motion states.

Indeed it does. When prosecutors, city officials, and police all work together to keep secret evidence showing one of their own killing an innocent woman, something is seriously wrong. Citizens of Burlington, beware, as officer Hill—who is still gainfully employed as a cop—may come to your house one day.