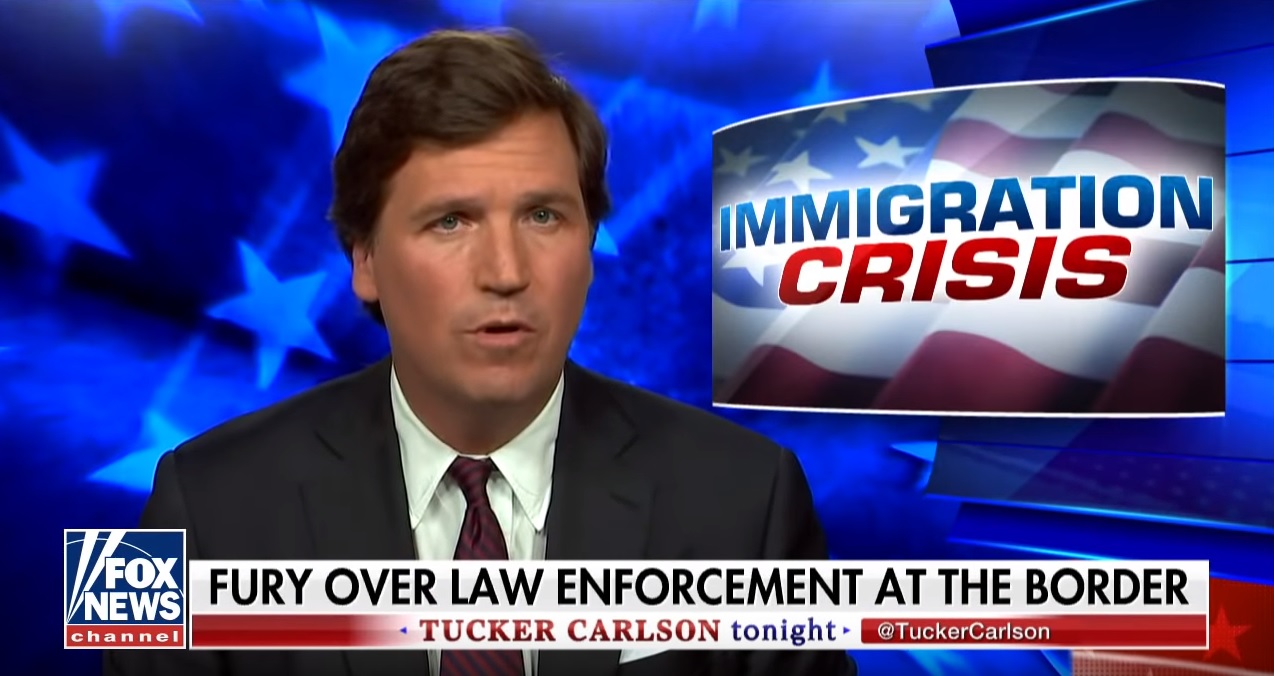 Monday on Fox News, Tucker Carlson thoroughly debunked the notion Democrats give a s**t about “family separation” by noting they don’t care at all about the collapse of “the American family” and actually actively agitate in favor of it.

“This is one of those moments that tells you everything about our ruling class,” Tucker said. “They care far more about foreigners than about their own people.”

TUCKER CARLSON, FOX NEWS: The spectacle of illegal immigrants separated from their children at the border has ceased to be a news story in any traditional sense of the term.

It is now an event, a kind of competition in which elites vie to see who can reach greater heights of rhetorical excess and self-righteous posturing. It is performance art really.

Congresswoman Nancy Pelosi and even Hillary Clinton took an early lead in the contest by bypassing public policy questions entirely and moving straight to theology. Here are part of their sermons. Watch.

REP. NANCY PELOSI (D), HOUSE MINORITY LEADER: The hypocrisy of all people of faith in our country not to clamor for what the administration is doing to end.

HILARY CLINTON, FORMER DEMOCRATIC PRESIDENTIAL NOMINEE: Those who selectively use The Bible to justify this cruelty are ignoring a central tenet of Christianity.

Jesus said, suffer the little children unto me. He did not say let the children suffer.

CARLSON: So, the same people who support third-term post viability abortion for purposes of sex selection are now lecturing you about God and sin and the holiness of children.

Feel chastened? But wait, there`s more. So much more. On Facebook, Sen. Ben Sasse called the administration`s policy wicked, as in immoral and devilish.

Former First Lady Laura Bush likened it to the internment of the Japanese during World War II, a moral stain upon this nation.

Former CIA Director Michael Hayden went all of the way. He tweeted out a picture of Auschwitz, a death camp, and compared the US government to the Nazis. After sobering up, Hayden walked that a little bit back on the television, but not much. Watch.

MICHAEL HAYDEN, FORMER CIA DIRECTOR: I know we`re not Nazi Germany, all right, but there is a commonality there.

I`ve lived in Germany for three years. A more civilized people, you cannot find. And so, I was trying to point out we need be careful not to move in that direction.

CARLSON: Oh, we could go on. There is so much more just like that. The rich and powerful are reminding you just how virtuous they are. You think all these people really care about family separation?

If they did, they`d be worried about the collapse of the American family, which is measurable and real, but they`re not worried about that. In fact, they welcome that collapse because strong families are an impediment to their political power.

And that`s why they`re always lecturing you about the patriarchy and the evil of the nuclear family. Millions and millions of American kids are growing up with one parent at home, families separated thanks to their policies, and that`s fine with them.

Many of those kids, by the way, have a parent behind bars. It`s not just illegal immigrants who are separated from their children. The majority of American citizens in prison have minor kids they`ve left behind. Their families have been separated by force by our justice system because they committed a crime.

So, in that way, these kids are just like the kids you`ve been watching on television today. The difference, of course, is they`re Americans. So, nobody is spending 35 grand a year apiece to make sure they`re OK.

This is one of those moments that tells you everything about our ruling class. They care far more about foreigners than about their own people. You probably suspected that already.

The other thing you may have noticed is that they`re not especially interested in solutions to anything. They`re great at yelling and at preening, not so good at fixing and building.

We could strengthen our borders to keep illegals out. We could fund more immigration courts to process those who sneak through anyway. We can even build more housing facilities at the border holding facilities to allow families to stay together while their asylum claims are processed.

But the left is not interested in any of that. Their only solution is immediate amnesty for anyone who crosses our borders with a minor in tow.

And, of course, that`s the same as no borders at all, not to mention a powerful incentive for child smuggling.

They don`t care because no matter what they tell you this is not about helping children. A lot of people yelling at you on TV don`t even have children. So, don`t for a second let them take the moral high ground.

Their goal is to change your country forever and they`re succeeding by the way. Since 2014, to name one example among many, at least half a million Central Americans who came here illegally have been released back inside our borders. Did anyone vote for that?

And more to the point who is going to pay for that. Not the people you`ve been watching on television today. Their kids go to private school if they have them. Their neighborhoods look exactly like they did in 1960. No demographic change at all. Just like they like it.

There`s no cost to them. The cost is entirely on you, but don`t complain or else they will call you Hitler.