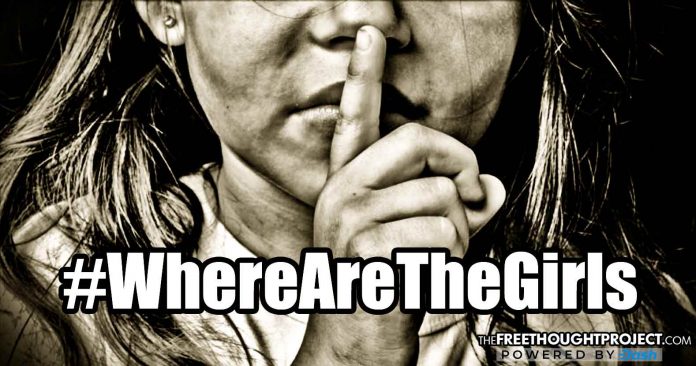 As the debate swarms over illegal immigration, Americans on both the left and the right are at each other’s throats pointing fingers over who’s responsible. In the meantime, what was a “conspiracy theory” a month ago is now being confirmed by the very people accused of keeping people in cages. One question, however, has just been raised which gives one a dark and sickly feeling inside when thinking about the potential answers to it: “Where are the girls?”

There is something particularly disturbing about the minuscule amount of footage recently released by HHS last week—it only shows boys, and only boys age 10 and up. Where are the girls? Where are the toddlers? Where are the babies?

Could it be that HHS is only releasing footage of these older boys to portray an image of less suffering and compliant young men in order to keep the public happy? Are the places where girls are kept so disturbing that none of this footage can be released?

According to official policy, the government does not remove toddlers and babies from their mothers. However, as TFTP reported, a mother from Honduras who came to the U.S. seeking asylum with her family said she was breastfeeding her infant at a detention center when her baby was suddenly taken from her with no warning and no explanation.

Now, the question of “where are the girls?” has become such an issue that it made its way to the White House and a reporter asked Department of Homeland Security Chief Kirstjen Nielsen.

Monday afternoon, during a White House press briefing, a reporter asked, “Why is the government only releasing images of the boys being held? Where are the girls & toddlers?”

Nielsen could not answer. When asked about the now infamous footage released by HHS that has been played all day on every major network, showing boys inside the Brownsville, Texas Walmart turned detention center, Nielsen claimed she never saw it.

When pressed on the issue, Nielsen then deflected the reporter claiming that she will “look into that.”

Reporter: Why is the government only releasing images of the boys being held? Where are the girls & toddlers?

Nielsen: I'll look into that pic.twitter.com/aWZ7UoehEr

Also on Monday, ProPublica released an audio recording that was taken inside a U.S. Customs and Border Protection facility. It is nothing short of heart-breaking.

The clip recorded two girls who had just been separated from their parents. They are scared to death and wailing as the border agent jokes, “We have an orchestra here.”

Since the question of “where are the girls?” began to gain traction, a firestorm has erupted on social media of people fearing the worst. Many people are claiming that they are being trafficked or abused. Indeed, as TFTP reported yesterday, a police officer was arrested for abusing one of these little girls and threatening her undocumented mother with deportation if she spoke up.

Exactly what is happening to the girls that are making it over the border remains unclear. However, the video above is enough to show that something has to change. Sadly, however, the left/right divide makes effective change nearly impossible.

These children are being used as pawns in a political game as rivals bicker over how to handle them while ignoring real factors that would curb this massive immigration problem.

Many Americans have been taught to dehumanize these refugees and to believe that it is not our problem. However, these refugees are a direct result of decades-old US policy.

In the heart-wrenching video above, one of the girls claims to be from Honduras. Honduras is currently a crime ridden hell hole rife with gang violence as coca plantations thrive—all thanks to the war on drugs.

Because making something illegal does nothing to curb the demand for it, the war on drugs acts as a fuel to the fire of gang violence and crime in these South and Central American countries by creating an incentive for criminals to capitalize on the constant demand.

As the Free Thought Project has reported, Ron Paul provides penetrating wisdom on truly effective ways to deal with the situation, while providing a financial benefit and removing a giant injustice being perpetrated by the U.S. government.

End the war on drugs.

From the Ron Paul Institute:

“Likewise, the 40 year war on drugs has produced no benefit to the American people at a great cost. It is estimated that since President Nixon declared a war on drugs, the US has spent more than a trillion dollars to fight what is a losing battle. That is because just as with the welfare magnet, there is an enormous incentive to smuggle drugs into the United States.

We already know the effect that ending the war on drugs has on illegal smuggling: as more and more US states decriminalize marijuana for medical and recreational uses, marijuana smuggling from Mexico to the US has dropped by 50 percent from 2010.”

This view is backed by data from the U.S. Sentencing Commission. In fiscal year 2015, illegal immigrants were responsible for 75 percent of federal drug possession charges.

Amusingly, both Sean Hannity and PolitiFact confirmed this. Data show that the ‘illegal alien” category accounted for “1,640 of 2,181 total convictions (75 percent) in which the primary charge was simple drug possession.”

It is important to note that a rise in gang violence in El Salvador, Honduras and Guatemala has caused this massive influx of immigrants seeking refuge lately. They are coming in by the thousands in an attempt to escape this violence created by the war on drugs.

Instead of looking at the cause of this violence, however, US policy is to separate immigrant children from their parents while prosecuting the adults—and this is supposed to somehow be a solution.

Paul also points out the burden of free medical benefits, food assistance, and education given to illegal immigrants which amounts to about $100 billion a year. Granted, many of them are part of the workforce in sectors such as agriculture, but not paying taxes and sending money back to Mexico creates a significant imbalance.

Instead of wearing the badge of the “largest prison population in the world” and continuing to convert Walmarts into detention centers, the United States could begin eliminating the national debt, reduce crime, foster personal liberty, and drastically decrease criminal gangs that flourish from prohibition—and all it would have to do would be end the war on drugs.

Sadly, at least for now, it appears that these dinosaurs in DC think that caging children, ripping them out of their parents arms, and repeatedly deporting them at the expense of the taxpayer, is the only solution. Please share this article with your friends and family to show them that there is a very real solution to this horrifying problem. Until this issue is pushed into the mainstream, the problem will only get worse.